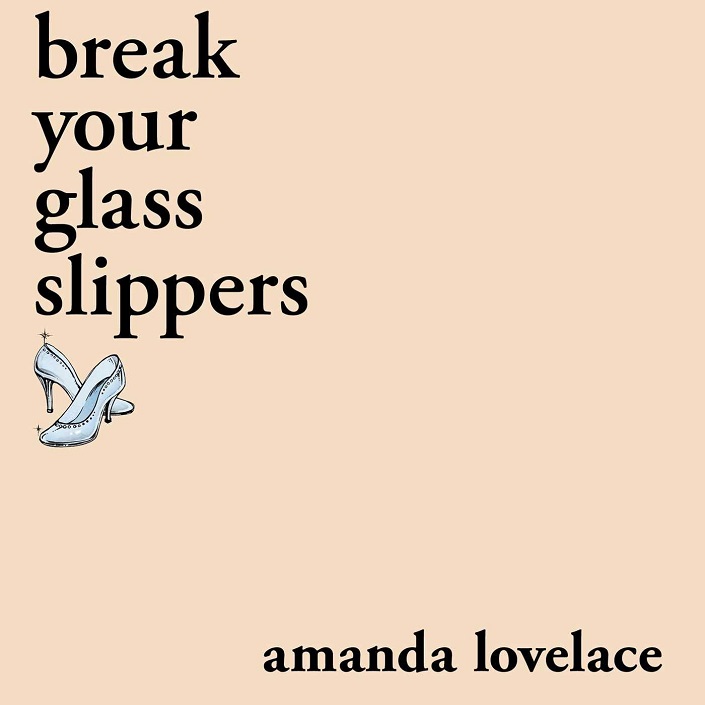 Fairy tale retellings are all the rage these days, but Goodreads Choice award-winning author Amanda Lovelace is doing this a little differently with break your glass slippers: She’s examining fairy tale tropes through the lens of poetry, using the genre to explore societal expectations and self-worth.

break your glass slippers (you are your own fairy tale) hits shelves on March 17th and is currently available for preorder via Amazon. But while we wait for the release, Lovelace is talking about some of her favorite, recent takes on fairy tale genre in the guest post below!

With all the live-action Disney remakes hitting theaters in the last decade or so—as well as the plethora of those pending—the literary world decided somewhere along the way that they, too, were hungry for more fairy tale retellings.

And boy, did they ever deliver.

Because why wouldn’t readers want to relive the pure magic and unbridled wonder from their childhoods, except with a fun and fresh YA twist?

Since it’s certainly been quite the challenge to keep up with these releases (seriously—they just keep on coming!), I’ve taken the liberty of gathering 5 noteworthy titles that, in my oh-so-humble opinion, are worth every penny, every minute, and every tissue:

2018 was generous enough to gift us with this dual “Snow-White and Rose-Red” and “Swan Lake” reimagining, and it has everything you could ever want in a book. There’s magical realism. There’s lyrical prose that stops you in your tracks and steals your breath. There’s a diverse cast, including Latinx, disabled, and queer characters. There’s plenty of forbidden romance. There’s sister love and sister rivalry, as well as plenty of other complicated family relationships we can all relate to one way or another. An all-around deserving addition to your ever-growing TBR!

The Wrath and the Dawn by Renée Ahdieh

Based on the Arabian classic “One Thousand and One Nights” (yes, the very same tale Disney’s Aladdin is derived from!), this one lives up to every ounce of the hype it’s received since its epic release in 2015. Every night, boy-king Khalid takes a young wife and murders her by sunrise. One night, he takes the life of Shahrzad’s best friend, who then volunteers to be his next bride, hell-bent on getting revenge. However, when Shahrzad goes in looking for a cruel, bloodthirsty monster, she finds something she never could have expected. And it’s a doozy.

The Sleeper and the Spindle by Neil Gaiman

This magnificently illustrated tale published in 2013 fuses together two beloved fairy tales we (mostly) all know and love: “Snow White” and “Sleeping Beauty”. A mysterious sleeping curse has overtaken the land, and like a badass princess who has no problem saving herself, the Snow White character goes on a quest to save everyone, including the sleeping princess. Not that Gaiman ever needs my recommendation or anyone else’s, but this one is not to be missed—plus, it’s a quick and pain-free read at less than 100 pages!

While this “Cinderella” tale came out in 2009—back when it was absolutely all the rage to put on your Snuggie while you curled up with a cup of tea and a good book–it still continues to touch thousands of readers everywhere, and for good reason. A story about the bleakness of grief and the messiness of healing, this was one of the first mainstream YA fairy tale retellings I can remember that featured a queer girl protagonist—Ash—as well as an intense f/f romance at its forefront. Swoon!

This 2017 “Beauty and the Beast”-inspired standalone is more of a traditional retelling, which classic fairy tale lovers will not only appreciate but adore. What sets this one apart from the others, then, you may ask? The Russian folklore woven gorgeously throughout. And this time, Beauty is out in the woods expertly hunting the Beast, who’s been terrorizing her family. Chock-full of vengeance and romance feels, this tension-filled tale is perfect for fans of Sarah J. Maas’s A Court of Thorns and Roses series.

Don’t forget to check out break your glass slippers (you are your own fairy tale) on March 17th!