Read an excerpt from Akwaeke Emezi’s YA debut novel PET 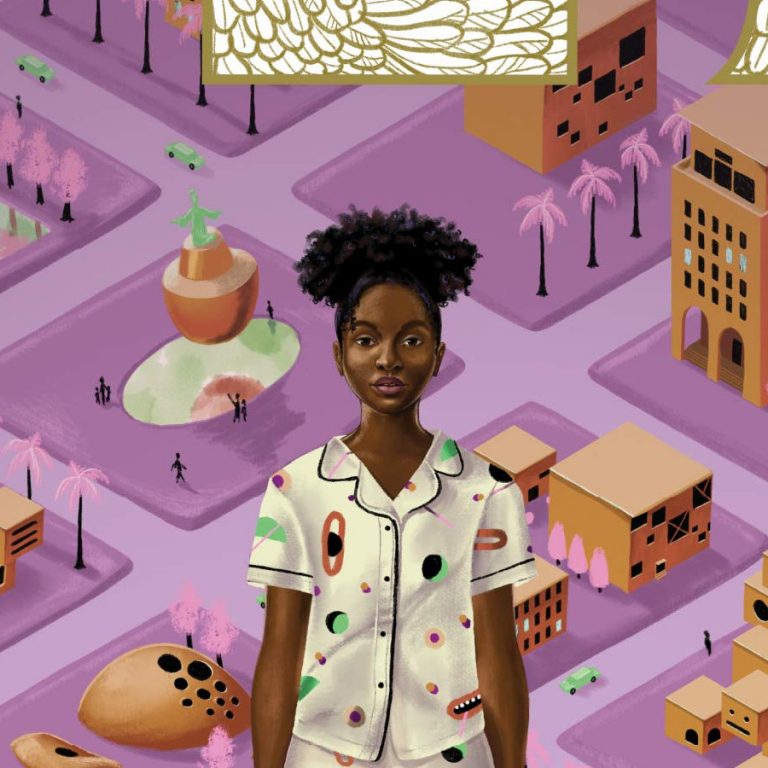 This is only her second book, but Akwaeke Emezi seems to be making a name for herself, with her second novel, an LGBT fantasy, PET, being a part of that reason.

An excerpt from Akwaeke Emezi‘s Pet was just released and we have it below for you to check out, along with the overview and cover.

Jam leaned forward to look at the painting. It was manywhite and thick and textured, paint climbing on itself as if it wanted to get away from the canvas, away from the floor underneath the canvas, even. There were raked gouges in it, next to delicate veined imprints, next to pieces of Bitter’s palm. Something large and loud in the center of the painting had the legs of a goat, fur like grated bone, solid thighs, their surface thrusting toward the ceiling of the studio. Jam pointed at it and looked at her mother. Bitter held her chin, thoughtful.

“I’m not sure, you know. The thing just coming out the way it want so.”

Its arms were long, even longer than Jam’s. It didn’t have a head yet. The smoke Bitter had painted around it was as dense as clouds, and Jam thought she could see it move, a jerky tendril here and there.

Bitter shrugged. “You could name something when you not sure what it is?” They stood and looked down together at the thing struggling out of smoke. “It’s just waiting sometimes,” Bitter murmured. “Just waiting.” Jam wasn’t sure if she meant that she was waiting for the thing to show itself or if the thing itself was waiting for Bitter to be done making it. Maybe they were one and the same. She took her mother’s hand and pulled her toward the angel books.

“Ah,” said Bitter. “What you have there?” Jam flipped some of the books open to the pages where she’d tucked the glittered bookmarks Redemption gave her on her last birthday. She pushed the books out across the table so her mother could see the pictures in each of them.

They were supposed to be angels, but they were terrifying: eyes filled with licking flames even as they looked out from the page, armored faces that weren’t faces, wings full of mouths, wheels of reddened eyes, four-headed forms that weren’t even vaguely human. There was a butchered lion head bleeding somewhere in there. Bitter hummed and touched the pictures.

Jam looked up at her. “Angels?” Bitter hummed some more and nodded.

Jam frowned. But Lucille, the mayor and the council and everyone who came together to take away the monster, those were angels, not these, she signed.

Her mother ran her stained fingers across the books. “‘Do not be afraid,’” she said.

Jam didn’t understand, so she kept the frown on her face.

“That’s the first thing angels does say, you know? Do not be afraid.”

Jam looked down at the pictures. It seemed like a reasonable opening line, considering how horrific they looked. Her mother laughed at her expression.

“Exactly,” she said. “We does think angels are white robes and harps and all kinds of pretty things, but chile!” She clicked her tongue. “Look at them. Good reason why they does strike fear into the heart.”

Jam wondered—if real angels looked like this, then what did that mean for the angels in Lucille? Did it mean people didn’t really know what they were talking about when they said angels in the first place? Angels weren’t supposed to look like this. They were supposed to be good, and how could something good look like this?

She tapped on the pictures and looked up at her mother, worried, pitching her voice low. “Monsters,” she whispered.

Bitter’s eyebrows shot up. “You think so?” She hummed some more and turned a few of the pages. “Well, I suppose one could see how you could see that. Only if you don’t know what a monster looks like, of course.”

You can read the rest of the excerpt at EW.

Pet is here to hunt a monster.
Are you brave enough to look?

There are no more monsters anymore, or so the children in the city of Lucille are taught. With doting parents and a best friend named Redemption, Jam has grown up with this lesson all her life. But when she meets Pet, a creature made of horns and colours and claws, who emerges from one of her mother’s paintings and a drop of Jam’s blood, she must reconsider what she’s been told. Pet has come to hunt a monster, and the shadow of something grim lurks in Redemption’s house. Jam must fight not only to protect her best friend, but also to uncover the truth, and the answer to the question-How do you save the world from monsters if no one will admit they exist?

In their riveting and timely young adult debut, acclaimed novelist Akwaeke Emezi asks difficult questions about what choices a young person can make when the adults around them are in denial.

You can pre-order the book below, which comes out September 10th.

Read an excerpt from Sara Faring’s YA Horror Novel, THE TENTH GIRL