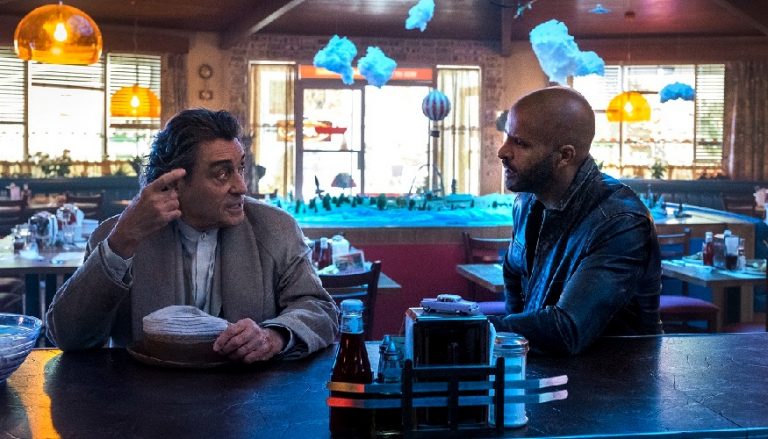 The fourth episode of American Gods just aired and it’s changing the game as the war between gods intensifies!

Unlike most of the season, this episode opens with a third party in play. It’s a young boy playing Pong… until his father forces him to stop and practice piano. The second he finishes, he quickly walks away to play Pong again. Flash forward, and the boy is now a teen playing GameBoy. He listens as his father desperately tries to get him to appreciate music, but he’s still focusing on coding when we see him next. Eventually, the boy combines the love of music and the love of computers: He codes a program that uses variations on Bach’s music to create new compositions, not noticing his father’s disappointment in the focus on devices rather than originality. At his father’s funeral, as this tech-created music plays, a new figure forms behind the casket– Technical Boy, spurred on by his first true follower.

Shadow’s first scene is equally dramatic: wakes up in the middle of the night and has sex with a random catlike goddess who literally licks his wounds. He wakes up in the morning with scratch marks, lots of confusion, and a cat following him, but this is never explored any further. Mr. Ibis shares his background and what lead him to become a funeral home director in Cairo. When Shadow asks about Laura, Wednesday appears behind him and instructs Ibis not to say a thing.

From there, Shadow and Wednesday are off to St. Louis, where Wednesday hopes to catch up with the god of money. There’s just one problem: Shadow doesn’t have a bank account and the god’s gatekeepers won’t allow them access. Together, they wait for their luck to change inside the kitsch restaurant and while they do so, Shadow tries to figure to exactly why Odin recruited him on this mission. He realizes that he has value to the old man, but he doesn’t know why.

Mr. Nancy finds Bilquis and Ibis at the funeral home, where a lone young woman mourns her mother. The funeral director has chosen peace in the war between gods and likewise, Bilquis has refused to fight for either side. Anansi, however, is ready for war. He gives a stirring speech about racisms and the protection of the black community in America as his justification– a truly mesmerizing performance piece by Orlando Jones. Bilquis is definitely convinced, but Ibis is less so.

At New God headquarters, Technical Boy is seriously struggling New Media’s naïveté, but Mr. World is more angry with him for letting Argus die. World viciously attacks him, but Technical Boy makes a plea for his existence. With one last idea, he goes to a fancy tech firm where he encounters a familiar character: His first original follower. Unfortunately, this original follower is a little skeptical of the latest pitch and when Mr World and New Media interrupt, Technical Boy loses his worship altogether. He tries to run from the building, but he can’t hide: Mr. World uses Technical Boy’s own device to “retire” him.

Because of this, money’s gatekeepers appear at the tech headquarters. Once granted access, he finds himself in a shadowy version of the restaurant, face-to-face with Wednesday and Shadow. In the background, Money appears. Wednesday tries to argue for the profit boom of war, while Mr. World argues that new world enterprises bolster money and spending. Unfortunately, money refuses to take sides because his entity just doesn’t make emotion investments. Wednesday tells Mr. World that eventually, he’ll win over more people because he’s well-liked, but World thinks inflicting fear is the operative skill. As World exits, Wednesday and Shadow are thrust back into the bustling real-world diner. Looks like their on the find the next potentially helpful god!

Four episodes in, it’s a bit worrisome to see how much of the season has focused on finding other gods and trying to get said god to join their side. There’s nothing wrong with these meetings, but multiple episodes centered around them is a bit much. On top of that, I’m desperately hoping Technical Boy is back soon– he’s one of the most interesting characters of the bunch and taking him out of play feels a bit ill-advised.

We’ll see where next week’s episode takes us!