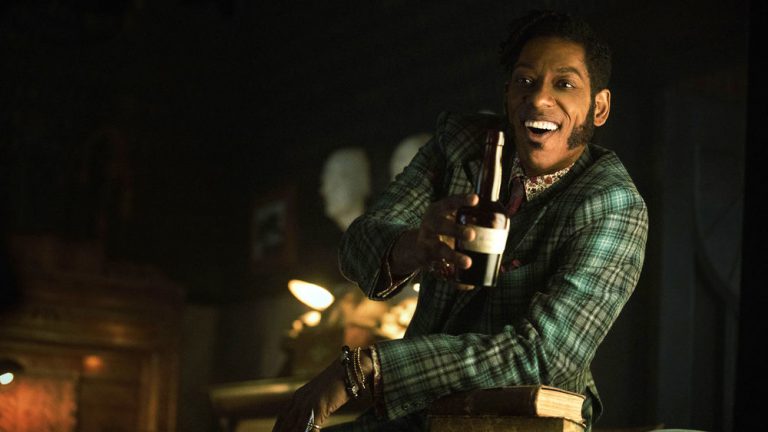 Without a New God in sight, the back half of AMERICAN GODS Season 2 begins with social issues and deeper character conundrums!

If you thought things were getting strange in Cairo, just wait until you see what’s going on in New Orleans in American Gods‘“The Ways of the Dead”!

Shadow is hanging out at Ibis and Jacquel, but he’s being haunted by the ghost of a lynched man. When Ibis brings in a body with similar wounds, Ibis explains that the spirit is William James, a man who was wrongly accused of killing a white woman and brutally, gleefully murdered by the white community in revenge many years ago. William seems to have a message for Shadow: “Remember you that have to die.”

Laura catches up with a drunken and desperate Mad Sweeney in New Orleans, where– after thoroughly shaming her for believing Wednesday in the first place–  he seems pretty happy to be reunited with his lucky coin. He takes her to a bar where The Baron resides and convinces his friends to give her a seat at the table.The Baron can give Laura what she wants if she gives him the truth.

Wednesday meets up with The Jinn and Salim just as the two are in a heated debate about gods and belief. Salim believes in Allah more than ever after all he’s seen, but The Jinn doesn’t believe in much of anything. Wednesday is charmed by Salim’s belief, given that belief sustains gods, but isn’t so keen on monotheism. They give him his spear, Gungnir, and the three hit the road. They meet fellow Norse mythology figure Alviss, an Asgardian dwarf and weapons master, but he can’t help them. Gungnir’s damage requires rune repair, not Alviss’ craftsmanship.

Meanwhile, Bilquis seems to have captivated the young woman she met an the funeral in the last episode, Ruby Goodchild. Ruby is ready to leave Cairo with her. The local priest tries to convince Ruby to stay, but she knows that Cairo has nothing left to offer her.

As Shadow and Ibis contemplate William James some more, Anansi makes a grand entrance. Shadow is quick to leave, but the scene diverges into two different dilemmas. Back at the funeral home, Anansi accuses Ibis of purposefully ignoring racial violence against the black community because it’s good for the “dead body business.” Meanwhile, Shadow runs into Jacquel aka “the dog” on the street, who leads him to the burning head of Will James. After the two speak, Will somehow manages to pass his burden to Shadow, urging him to share it.

Back in New Orleans, The Baron has cooked up a solution, but there’s one element Laura will have to get herself: Two drops of blood “given with love”. The Baron once again demands her truth and the two start to have sex just as, in the other room, Mad Sweeney and The Baron’s lover Bridgette begin to do the same. As things get intense, the scene blurs and suddenly Laura and Mad Sweeney are with each other. WHOA THERE! Laura and Mad Sweeney don’t just have great zany chemistry, they’re in love?! That’s Laura’s truth?! This is a development!

We move back to the funeral home, where Ruby Goodchild’s brother’s funeral is underway. After the priest breaks down and acknowledges Ruby’s earlier admonishments that faith alone has not made life better for the black community in Cairo, he urges her to try to find a better place– and let him know if she finds it. When he’s done, Shadow walks to the pulpit and shares Will James’ message of embracing death, groggy and confused once he finishes. Later that night, Shadow tries to get an answer about what happened to him out of a drunken Wednesday, Anansi, and Ibis, but they’re not budging.

We end back in New Orleans with a very unhappy Laura Moon. She thinks that Mad Sweeney purposefully planned the trip to The Baron to trick her into sex and serve as a distraction for Wednesday. Needless to say, she is hellbent. Meanwhile, Sweeney’s in a rage because she hasn’t come back to life yet and his lucky coin is still out of reach. Their saga is clearly not over yet because the moment Laura walks away, Mad Sweeney’s luck begins to sour once again.

Overall, this episode felt a little disjointed. This is certainly not the show’s first time dealing with racial tensions and violence against the black community but even with the devastating imagery, the writing didn’t strike me as hard as it did in previous episodes– For instance, Anansi’s stirring speech in episode four. Will James’ message via Shadow should have felt earth-shattering, but it was short and vague. There was a lot of talk about the state of Cairo and the world, but nothing came of it. Meanwhile, Wednesday’s mission was just a sidebar to the start of a different mission and probably could have been left out. Only the Laura and Mad Sweeney storyline actually felt like it was actively moving forward. The story of the show’s own main character, Shadow, has been focused solely around buildup for a couple episodes and at this point, we need to see something happen.

Hopefully, episode six will bring us some forward progress next week. See you then!