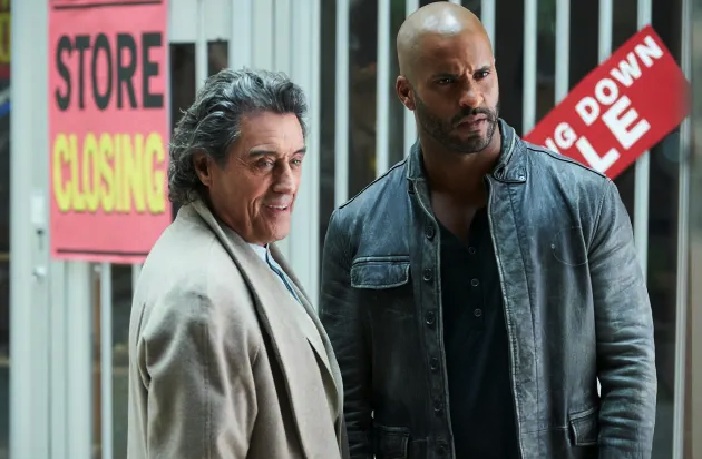 It’s all about Wednesday and the loss that changed him in the latest episode of AMERICAN GODS, “Donar The Great”!

How did the cunning Wednesday become such an isolated soul among the gods, even as he tries to lead the Old Gods into war? “Donar The Great” is here to tell us!

We open in the 1930s, when Wednesday isn’t yet scheming for a war. Instead, he’s running a burlesque show starring the ancient gods, including his very own son, Donar (better known as Thor, but we’re going with the Old Germanic name here). The awe from the crowd is enough to sustain the Old Gods, but they’re not exactly at full strength. Still, everyone is there: Mr. Nancy sassing the performers backstage, an early version of Technical Boy who’s jazzed about the invention of the telephone (it seems he’s died and been reincarnated since), hundreds of spectators, and unfortunately, a few American Nazis. It’s this last group that’s particularly interested in Donar’s strength and stature– They need a champion to sponsor in a worldwide weight-lifting competition and they think he’s their man. Donar is a bit skeptical, but Wednesday is all in for the impending worship.

Back in the modern day, Wednesday and Shadow’s search for Dvalin, the Asgardian dwarf with the rune-welding skills capable of fixing Wednesday’s beloved spear Gungnir, leads them to a mall, of all places. It seems that in order to survive, the dwarves have turned to retail– but even that’s a dying business with few items of power left for the dwarves to draw strength from. As such, Dvalin is weak. In order to get his help, he requires the most powerful item in the mall: A leather jacket worn and signed by Lou Reed. In the midst of entering the mall and getting the scoop, Wednesday says something telling to Shadow: “You remind me of my son.”

We return to flashbacks, where Donar is cleaning up as a world weightlifting champion, becoming a bit obsessed with his new form of glory. There’s just one problem: Donar is set to compete against the German champion in the final round. The Nazis want him to throw the match because Germany is the motherland of their movement. Being an ancient god, Donar is none too pleased about being told what to do, even as Wednesday urges him to take the loss. With the writers seemingly having realized Orlando Jones’ bombastic talent, Mr. Nancy gives another fantastical speech in he divulges his own history as a warning. Still, Donar decides he’d rather skip town with his beloved Columbia than lose on purpose.

Back in the mall, a modern Wednesday and Shadow have cooked up quite the scheme to retrieve Lou Reed’s leather jacket without spending a cent. Wednesday appears in the music store as an enthusiastic Lou Reed fanatic and a priest. No one would ever suspect a man of the cloth, right? Wednesday tries on the jacket, then pays the baffled clerk in cash. Just then, Shadow busts in with a crew of official-looking “agents” to arrest Wednesday. It turns out his alter ego is an expert counterfeiter who law enforcement has been tracking for ages. As such, fake FBI agent Shadow will need the cash and the jacket as evidence. Safely away, they wait until the mall closes to drape the jacket over Dvalin. His power renewed, the dwarf quickly fixes Gungnir’s runes.

Shadow continues to question Wednesday’s earlier statement about his son. The Old God is reluctant but finally, he breaks down and tells Shadow the end of Donar’s story as we shift back to the burlesque show.

Before Donar and Columbia leave town, Tech Boy and Wednesday convince Columbia to become the new face of the upcoming war effort by lying and saying Donar already left for his final competition. Wednesday tries to tell Donar that Columbia chose to leave him, but his son sees right through him. Their argument in the dank alleyway soon turns into a full-fledged face off, ending when Mjolnir breaks Gungnir. Donar leaves Wednesday for good to forge his own path.

Years later, Donar killed himself just outside Philadelphia, Wednesday reveals. A quick shot of the death shows “Somewhere In America” spattered into the blood behind him.

While a slightly different take, “Donar the Great” still follows the “god of the week” format to show is sinking into in its second season. Still, it offers up some pretty great insight as to why Wednesday holds everyone at arms’ length, including his greatest allies. It reveals that his coolness toward Shadow masks a great deal of caring– In fact, the more he cares, the more standoffish and enigmatic he may be with a person. Too much of his influence may have led to Donar’s downfall, after all.

The 1930s throwback and the burlesque show elements were a lot of fun, but pacing was a bit of an issue at points. The set, the costumes, the makeup– The show clearly dedicated itself to entrenching everything into the time period while keeping its signature flair. But while Donar’s act was a spectacle that showed his strength, but did we really need Columbia’s full number to play out on stage? Did we need we need her storyline at all, in fact? In the modern storyline, the hi-jinks were great, but they occupied so little of the episode. My struggle with the “god of the week” format in general is that we’re investing huge swaths of time on characters that probably aren’t going to be seen again.

Now that Shadow knows the pain of Wednesday’s past, we’ll see how things change between these two connected but complicated characters in Episode 7!