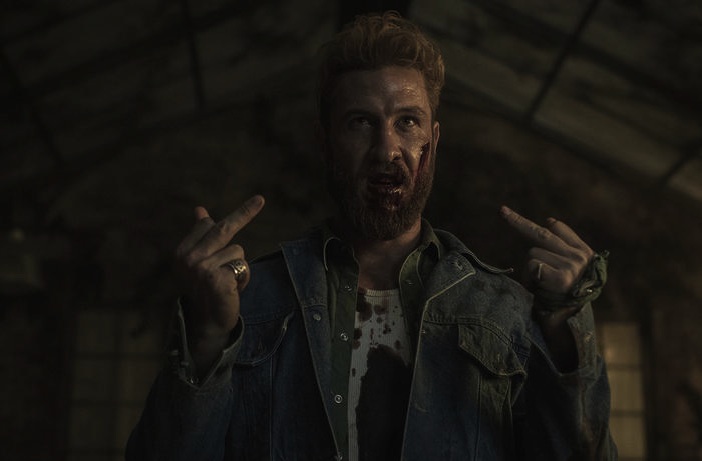 This week’s episode of American Gods is all about Mad Sweeney. It’s also one of the show’s most captivating episodes yet, so buckle up!

Shadow finds Mad Sweeney half dead and delirious under a bridge in Cairo. He definitely expects more of a reaction than he gets when he tells Wednesday about it, but his boss is more concerned with the fast-growing World Tree and using it to fix his almighty spear, Gungnir. He wants Shadow to guard that spear with his life and that’s just about all he can think about.

Mad Sweeney arrives at Ibis & Jacquel during a church service where Bilquis is preaching her own causes via Christian themes. When it’s over, Bilquis asks that Sweeney give her his confession. The problem is, the ancient being can’t quite remember all the details. He remembers a woman, and that he was allegedly killed after hearing a dark fortune that he would be “undone by a dead woman’s babble”.

Several hours later, Mad Sweeney wakes up from his stupor and makes a bold move: He tries to assertively remove himself from his contract with Wednesday. The latter, of course, is not amenable. In the process, they reveal Mad Sweeney’s real mission: Putting an end to Laura Moon once and for all.

As banshees dressed as mourners watch from close by, Mad Sweeney falls into another flashback. He’s living wild in the woods when he’s approached by his wife and daughter. They bring him food and as he eats, his wife timidly tells him the story of what lead to this downfall: Mad Sweeney abandoned his allies during wartime and in the process, he lost his land, his title, his people, and seemingly his mind.

Another flashback goes even further back to show Sweeney and his wife arguing in the woods. As a king, he is very against the kingdom’s new allies, the Grey Monks, but his wife thinks working with them would be best. Upon realizing this religious group built an unauthorized church on his land, he gets into the brawl with the bishop and kills one of the priests. This, he explains to Salim, is why he’s seeking a battle. The bishop cursed him to “die by the spear” like his priest did and, hearing the banshees that signal death, he fled from battle in his first incarnation. He’s done nothing but seek battle since.

Stumbling back inside, Mad Sweeney finds Shadow carefully guarding Gungnir. He tries to warn Shadow that Wednesday cannot be trusted and in particular, to keep Laura away from Wednesday. It seems that despite their massive fallout, Sweeney’s feelings for Laura are still going strong. Holding Shadow’s lucky coin hostage in The Hoard as he does so, Sweeney tells Shadow that death is coming to Ibis & Jacquel that night and implores him not to “get in the way” when it does. His message to Shadow is an ominous one overall: Don’t trust the gods.

Next up, Sweeney finds Ibis writing out a different part of his story: The peak of his time as a beloved god-king in Ireland, known for his luck and skill with a spear in battle. But this time is also where his madness sets in: In battle, when Sweeney killed his own grandfather, lest he be killed. Afterward, Sweeney sees the banshees for the first time. But as they talk out the memory, it changes. Sweeney says it was never his grandfather he killed, but Grimnir aka Wednesday– a foreign god impeding on his land. Is Sweeney seeing the truth or is this another one of his strange hallucinations? Has their whole contract been Wednesday enacting revenge against them? Either way, he leaves Ibis’ office certain that he’s not going to make it through the night.

Finally, all the foreboding flashbacks and conversations come to a head. As the gods sit down for dinner, Mad Sweeney comes in and confronts Wednesday. The Old Gods clear out. He tries to steal Gungnir from Shadow with another warning for the hired hand to stay out of the way, but Shadow won’t give up the spear. He and Shadow battle for it in a very involved and entertaining fight sequence, all while Wednesday eats and watches. Dinner and a show! Shadow beats Sweeney nearly to a pulp, but before he’s totally down for the count, he tells Shadow that Wednesday had him kill Laura and implores him to leave Wednesday’s service.

Shadow doesn’t know what to believe, so he gets up to confront his boss. This gives Mad Sweeney his moment: He picks up Gungnir and throws it at Wednesday. Unfortunately for him, Shadow notices, catches the spear, and turns it around as he lands. Sweeney’s forward motion causes him to fall upon the upturned spear. Shadow is devastated, but Sweeney’s not done yet. He grasps Gungnir, transfers it into his strange singular realm known as The Hoard, and flips everyone off one last time before falling to the floor, dead. Mad Sweeney dies by the spear.

Mad Sweeney’s death is much, much different from the books– he freezes to death under the bridge, desolate and alone. It’s while “talking” to Shadow after his death that he tells him about The Hoard. I can be a stickler for book-to-show changes, but I think the show version was superior in this case. It gives you time to feel the character’s death and soak it in bit by bit. This episode was a tough one to watch because you know exactly where it’s going in the end, but the journey there was fascinating. Season 2 has had issues with giving proper credence to its plot lines but this time, the show did it.

After an entire episode dedicated to him in Season 1, Mad Sweeney is one of the show’s most fleshed-out gods. Thanks to his misfortune and strange relationships with Laura and Wednesday, he’s also one of the most entertaining. Of course, Pablo Schreiber has given consistently amazing performances that showed range and passion, which is a massive part of the equation. We can rest assured knowing that he’s getting ALL THE ROLES since his departure from the show. While this was an excellent send-off, I feel like the show will be a little lesser without Mad Sweeney overall. I guess we’ll see!

Can you believe it’s already time for the Season 2 finale next week? We’ll see you then!