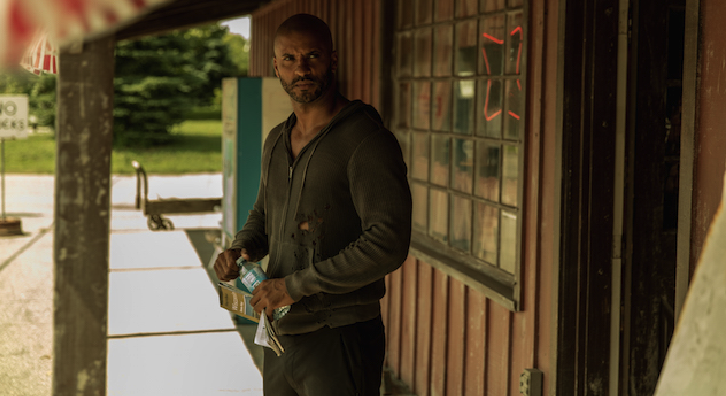 A train and a car collide. The car named Betty, fortified by a god, survives. Anansi has disappeared to avoid the madness. Wednesday awaits and saves Laura and Mad Sweeney but for some reason, he leaves an injured Shadow behind (?!)

While being stitched up at Ibis & Jacquel funeral home (again), Laura is given a choice between Wednesday and Mad Sweeney, both of whom are offering her a second chance at life. Wednesday wants to take her to Argus, but Mad Sweeney believes only The Baron in New Orleans can save her. Laura chooses Wednesday, but it immediately seems that she may have chosen wrong.

Given his unique role in the pending war, both Old and New Gods are after Argus, a figure from Ancient Greek myth turned god of surveillance. Back in the bunker, Mr. World is at the end of his leash with Technical Boy and with Media missing, he brings forth a new accomplice: New Media, who specialized in social media messaging. But of course, seeing as television is a form of traditional media, the show had to get in one good dig: “How the fuck is that an upgrade?”

Wednesday and Laura go to Argus, where Wednesday sacrifices Io in a memory and gives a knife of some sort. They’ll have to chase Argus through a trail of memories to find him. In the meantime, Wednesday tries to convince Laura that she doesn’t really want or care about Shadow. Instead, he thinks the “mission” that’s keeping her alive is all about her. He drops some pretty heavy hints that he’s not really going to help her out much, yet she doesn’t seem to realize the danger she’s in.

Meanwhile, Mad Sweeney is having a hard time traveling without his luck, which walked away with Laura Moon. After being attacked by a pitbull and setting a boat on fire, he ends up hitching a ride to New Orleans… with an evangelical Christian rock band. They’re short bits of humor, but each scene helps break up an otherwise heavy episode delightfully and this trippy show definitely needs that type of content included.

Surprisingly, the character that this episode focuses on the least is the main character, Shadow Moon. After barely escaping the train wreck alive, Shadow tries to swindle a store owner, but a stranger stops him. After some back and forth, she agrees to give him a ride to Cairo (that’s Kay-row), where Shadow thinks he’ll find Wednesday again. Book readers know her as Sam Black Crow and, as they travel, she explains her rare human state: She’s two-spirited. The two become friendly as they travel and discuss the search for peace; a thing that Shadow may never find.

Technical Boy and New Media make a trip to visit Argus in hopes of getting up to “upgrade” them into the future. Technical Boy’s harsh approach doesn’t work, but then New Media does what she does best: Sells sex to Argus, this time in the form of “synergistic marketing opportunities” aka social media advertising via watching and listening devices. What they don’t know is that in the back room of Argus’ hideout, Wednesday has convinced Laura to kill Argus. Technical Boy sees her coming, but he’s so pissed off at Argus that he lets Laura kill him outright. When the New Gods leave, Laura’s heart beats again. Wednesday uses this as proof that Laura’s mission on this earth isn’t really about Shadow and lives her unceremoniously kneeling next to Argus’ dead body.

Sam drops Shadow off at at Ibis & Jacquel funeral home and finds Wednesday waiting for him. The god isn’t exactly forthcoming with answers, but all the same, Shadow can’t bring himself to leave. It’s not quite the crazy fun cliffhanger from last week, but we’ll still be back all the same.

Overall, this episode felt a little too cluttered. A lot was going on but none of the story lines felt particularly important, nor did it feel like setup for something bigger. Hopefully, the new story will introduce a little more significant action to get things back on track.

See you next week!