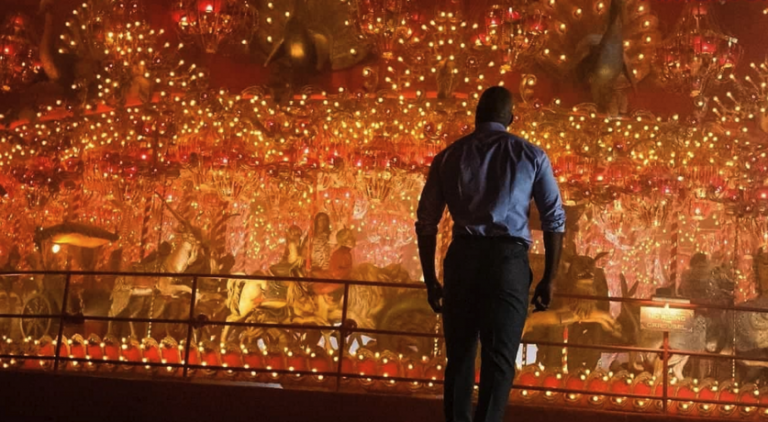 It’s been a long time since fans of Neil Gaiman’s American Gods novel have seen its television adaptation– almost two years, in fact. Since then, the original showrunners left the project and several additional behind-the-scenes shake-ups left production on Season 2 considerably delayed. But American Gods is finally back and thankfully, it hasn’t lost its outlandish and captivating edge!

We’ve all missed Shadow Moon, but the premiere makes us all wait just a wee bit longer to see him. Instead, it begins with Technical Boy and Mr. World recovering from their run-in with Wednesday aka Odin and heading to the top secret Blackbriar facility. They have a plan to track the Old Gods, but they’re missing one key element they’ll need to bring them down completely: The goddess Media. World sends Technical Boy on a mission to find her, one that leaves the latter god is none too pleased. It’s evident how much joy Crispin Glover takes in his villainous role as Mr. World, and Bruce Langley seems to have plenty of fun playing the spoiled trust fund type among the New Gods.

Shadow, Wednesday, Mad Sweeney, and Laura are on a mission of their own. They’re headed to the whimsically wild House On The Rock, a seemingly normal Wisconsin tourist attraction that’s about to get even weirder. See, the Old Gods are there for a meeting. At the gates, the four meet Anansi (Is anyone having more fun on this set than Orlando Jones?) and inside, they find that Bilquis, who was not invited, has crashed the party.

She’s not the only party crasher, of course. The Jinn– working as a sort of security officer for the meeting– is baffled by the reappearance of his lover Salim. Unlike Bilquis, Salim has good intentions and means to fight for his love with the Jinn. The two stay at the House On The Rock entryway with the only other two people denied access to the meeting: Laura Moon and a very miffed Mad Sweeney.

After a brief encounter with Zorya Vechernyaya and Czernobog, everyone heads to the carousel room, where things get a little freaky. A reluctant Shadow joins the gods on the carousel and while he’s enjoying himself at first, the world begins to warp around him. It looks as if Shadow is on a bit of an acid trip, but no– He’s just being thrown into the world of Wednesday’s memories. From there, Bilquis leads Shadow to a temple where all the Old Gods reside in their true forms. The almighty figures debate a war with the New Gods and on the whole, they don’t seem super enthusiastic about the idea. Still, Shadow worries for the Old Gods and gives a rousing speech meant to drive them to Wednesday’s cause; to war.

Afterward, Shadow is shifted back into the real world, where the meeting attendees gather at the diner at Motel America. The mood is light because this crowd doesn’t realize that Mr. World has a spy on the inside and plans to disrupt them. The biggest worry inside comes from Laura Moon, who realizes as she watches him at the party that her claim on Shadow has dissipated as he falls deeper and deeper under Wednesday’s influence. Mad Sweeney uses her possessiveness to try to level with her, but it still doesn’t look like he’ll be getting his lucky coin back anytime soon.

Finally, Bilquis slips out the door and Mr. World makes his move. He’s sent a sharpshooter to decimate the Old Gods’ diner, taking down a couple of unspecified gods with concave faces and splattered chunks of brain. Shadow sneaks out the back of the diner and tries to confront the shooter himself, but it’s a trap: The attacker is prepared to take Shadow by force and does exactly that.

When the dust settles, Wednesday finds Zorya Vechernyaya shot. After a brief moment, she dies in Wednesday’s arms, leaving her brother and overall hothead Czernobog to declare bloody vengeance. Most of these Old Gods may not have wanted war before, but the New Gods just brought war to them.

The Season 2 premiere’s last shot is a reminder in itself: The New Gods may have taken Shadow, but Laura Moon can still see him shining like a beacon as he quickly moves away from her.

“House on the Rock” is an impressive opening statement for the season to come. With lush sets, new gods and mythologies introduced, rifts between the existing characters slowly forming, and a taste of the violent war between gods new and old on the way, we’re anxious to see it all play out. Even more relieving to see is that, even with a new team on board, the show hasn’t lost its lust for the strange and fantastical elements that set it apart.