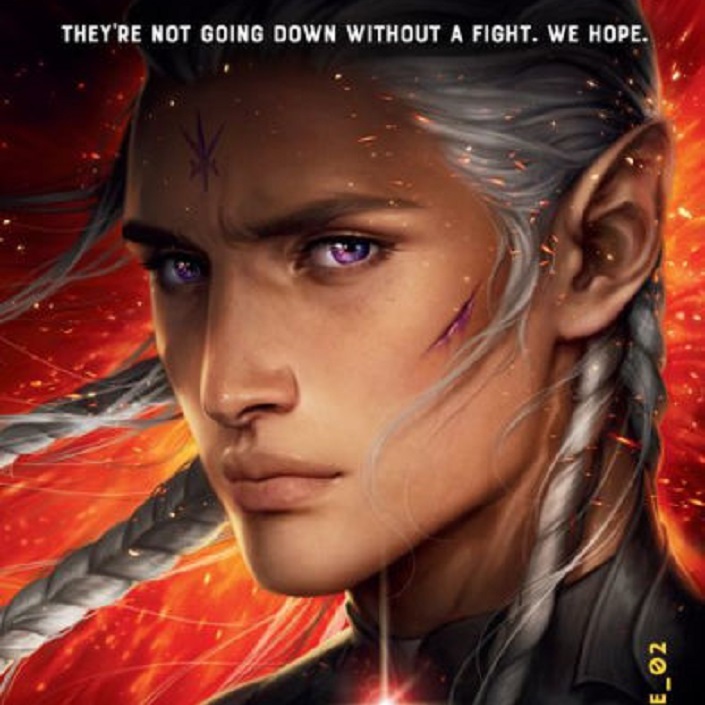 Amie Kaufman and Jay Kristoff are back with Aurora Burning, the fever pitch sci-fi sequel to last year’s Aurora Rising, which follows a squad of misfit space legionnaires after they discover a powerful anomaly among the stars and soon become hunted outcasts on a mission to save the entire universe.

But let’s start with a fun fact that threw me off: For some reason, I swore up and down that The Aurora Cycle was a duology. I was expecting this book to be the big conclusion to the adventure and oh boy, I WAS WRONG. I don’t know if I missed an announcement or if I just had the book count wrong all along, but Aurora Burning is the middle book that introduces all the twists and a banger cliffhanger of an ending. Let’s dive in!

One thing I massively appreciate about Kaufman and Kristoff books is that the authors (on both team-ups and individual projects) include a quick character and plot recap at the beginning of each sequel. I loved Aurora Rising, but I didn’t remember every single detail a year later. With this method, the book was able to refresh readers and avoid that tedious trend of characters inorganically rehashing past events for no good reason. The recap also came from Aurora’s sassy uniglass AI, Magellan, which made it quite entertaining as well!

After the quick fresher, the novel dives right into the action and takes a long while yet to let up again. After all, being intergalactic fugitives is no walk in the park and requires lots of clever scheming. As Tyler, Scarlet, Kal, Aurora, Finian, and Zila take on the tale from their POV, it’s easy to feel all of their unique personalities shining through from the get-go. The distribution of character focus shifts a bit to fit the plot– let’s just say Kal is on the cover for a reason– but still remains pretty equitable among the narrators.

The more I read works by the authors, the easier it is to guess who’s writing which sections of the book. This is particularly true for Jay Kristoff, who likes to add in a particular brand of zany commentary that teeters on the edge of absurdity whenever he can. Being able to assume the writer behind any given scene didn’t really affect my enjoyment levels much, though, as both are clearly capable and tell a great story.

Aurora Burning brings on some major new complications for our heroes, but also a really fun plot mystery that had me guessing and occasionally made me smile as bits and pieces were revealed. There’s so much twisting and turning, but there’s also plenty of plot development and character growth. So what’s the one caveat, you ask? Though it starts off at breakneck speed, Aurora Burning is perhaps the first team-up by these authors that featured a mid-section lull. The story doesn’t go completely dead, but it loses some excitement for the sake of logistics. It does pick back up again leading to the absolutely BANANAS ending, though!

Overall, it’s really easy for me to love these books. They’re charming, unexpected, and fun. Aurora Burning may have a slight sag in there, but it’s still one of the more entertaining books I’ve read in a long while, and in these times, we could all use some solid entertainment set in another place and time!

Aurora Burning (The Aurora Cycle #2) hits shelves today. You can snag a copy via Amazon, B&N, or Bookshop.org, which supports your local independent bookstores and is more important than ever!

First, the bad news: an ancient evil–you know, your standard consume-all-life-in-the-galaxy deal–is about to be unleashed. The good news? Squad 312 is standing by to save the day. They’ve just got to take care of a few small distractions first.

And the cadre of illegit GIA agents with creepy flowers where their eyes used to be, who’ll stop at nothing to get their hands on Auri.

Then there’s Kal’s long-lost sister, who’s not exactly happy to see her baby brother, and has a Syldrathi army at her back. With half the known galaxy on their tails, Squad 312 has never felt so wanted.

When they learn the Hadfield has been found, it’s time to come out of hiding. Two centuries ago, the colony ship vanished, leaving Auri as its sole survivor. Now, its black box might be what saves them. But time is short, and if Auri can’t learn to master her powers as a Trigger, the squad and all their admirers are going to be deader than the Great Ultrasaur of Abraaxis IV.

Shocking revelations, bank heists, mysterious gifts, inappropriately tight bodysuits, and an epic firefight will determine the fate of the Aurora Legion’s most unforgettable heroes–and maybe the rest of the galaxy as well.