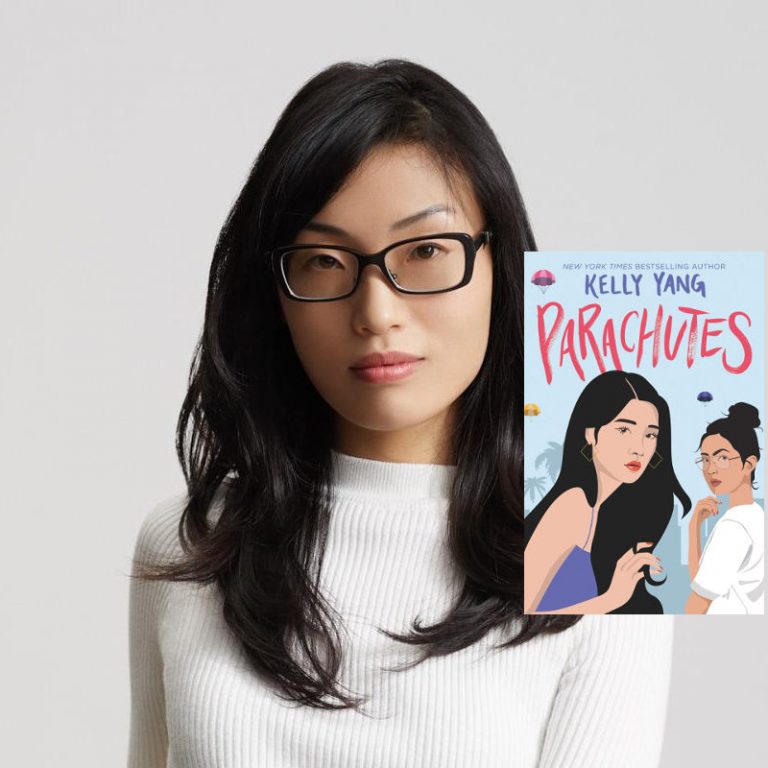 Kelly Yang’s first YA novel, Parachutes, is set to come out later this month, and she got to talk to Publisher’s Weekly about the theme of the book and how personal the book is for her.

What made you decide to make the leap from middle grade to YA for your second novel?

I wanted to write Parachutes to explore the modern-day immigrant experience, specifically centering on young people immigrating without their parents. These kids are still dealing with hardships and discrimination, but in different ways. I wanted to write about identity, privilege, power, wealth, and family dynamics. I think both books are authentic and explore these themes in their own way, so in that sense, I don’t know that it was that big of a leap.

My understanding is that Front Desk and Parachutes are both quite personal stories for you. Can you talk about that? Which of your characters do you identify with most and why?

Yes, elements of Front Desk are inspired by my childhood, while Parachutes mirrors my own experience with sexual assault in school. While I was in law school, I found myself dealing with the aftermath of this traumatic incident while fighting for justice in a school that just wanted to protect its brand. The next few years were incredibly draining, and trying to navigate that as a first-generation immigrant, as a woman of color—it made me realize that so many people in even the highest institutions are complicit.

I was a scholarship student and experienced poverty much like Dani, trying to claw my way into these Ivy League, ivory tower schools while wondering, “How much can you speak up about things?” All that is very much part of my personal experience; I also identify with Claire because of her experiences with sexual assault.

What would you consider the central themes of your work?

I’d say exploring identity, female empowerment, and struggling to find your voice and be heard. And then asking, “What happens when people deem your voice to be too loud? What does it mean to be penalized for speaking out?” My work also centers family and friendship; I’m interested in exploring what it means to be a good friend, and I enjoy writing characters who find how much we have in common as women—the amazing extent to which we can band together and speak out.

You went to college at 13, majoring in political science, and went to law school at 17. How would you say these experiences shaped your career?

One of my first editors said that really great children’s book authors usually had something big happen to them when they were teens that they can then tap into for the rest of their lives. Going to college so early was probably my “something big.” It was equal parts exhilarating and traumatizing. All that drama, angst, those memories—they resonate, even years later. These experiences allow me to connect to that time in my life when I write. To be 13–17 and in higher education—it probably put me on a different trajectory than my peers—for better or worse!

Your recent essay in Elle addresses racism in the time of the coronavirus. What do you hope readers will take from Parachutes, considering the present moment?

I hope people read Parachutes and notice how the characters are constantly dealing with microaggressions and “casual” racism throughout—I want them to realize there’s no such thing as casual racism. It’s all just racism. I really want people to read and to step into the shoes of the characters, to consider what “casually” happens to Dani and Claire, and think about why and how these things happen. I also hope this time leads to a lot of people reading lots of books by Asian American creators and other authors of color.

They’re called parachutes: teenagers dropped off to live in private homes and study in the US while their wealthy parents remain in Asia. Claire Wang never thought she’d be one of them, until her parents pluck her from her privileged life in Shanghai and enroll her at a high school in California. Suddenly she finds herself living in a stranger’s house, with no one to tell her what to do for the first time in her life. She soon embraces her newfound freedom, especially when the hottest and most eligible parachute, Jay, asks her out.

Dani De La Cruz, Claire’s new host sister, couldn’t be less thrilled that her mom rented out a room to Claire. An academic and debate-team star, Dani is determined to earn her way into Yale, even if it means competing with privileged kids who are buying their way to the top. When her debate coach starts working with her privately, Dani’s game plan veers unexpectedly off course.

Desperately trying to avoid each other under the same roof, Dani and Claire find themselves on a collision course, intertwining in deeper and more complicated ways, as they grapple with life-altering experiences. Award-winning author Kelly Yang weaves together an unforgettable modern immigrant story about love, trauma, family, corruption, and the power of speaking out.

Parachutes will be released on May 26th, and you can pre-order a copy on Amazon, Barnes & Noble, or Bookshop.