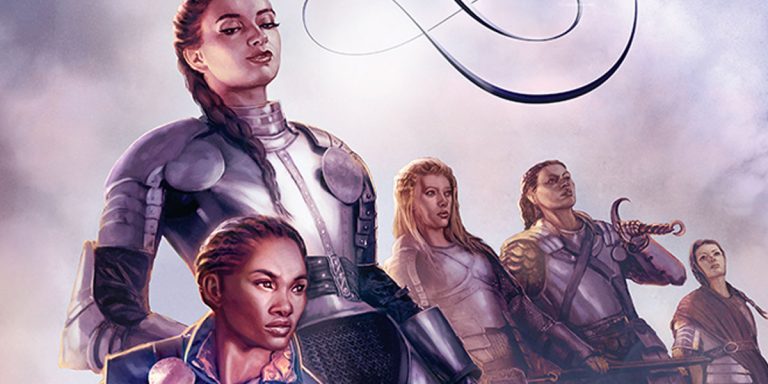 When I first heard about E.K. Johnston’s The Afterward, I had to get my hands on it. A story about a team of lady knights, an apprentice, a thief, and a mage who have saved their world, only for the apprentice and thief’s blossoming f/f relationship to flounder in the wake of their newfound fame? You’ve got my attention. New threats on the horizon that will bring them together once again to fight for their country and each other? I’M THERE.

This is what the blurb describes. Unfortunately, that’s not really what this book is.

Let’s start with credit where credit is due. The rep in this book is ah-mazing! E.K. Johnston created a fantasy world that’s diverse and inclusive in more ways than one. Many authors would go “Well I have f/f leads and that’s my rep quota,” but she thankfully doesn’t do this.

On top of that, Johnston built an impressive medieval fantasy world with all the fixings. We get a peek into royal courts, knighthood, the thieves court, and lands far beyond the kingdom that may within the world never see. There is also magic and some creepy supernatural elements that come into play, all of which are definitely fun to read.

Unfortunately, a novel can’t survive on rep and worldbuilding alone.

The problem here is the stakes– There really aren’t any. Romance by definition is low stakes (and there’s nothing wrong with that). Anything described as a romance in modern literature typically concludes with Character A ending up with Character B, and we’re happily along for the ride. Additionally, the “Before” sections of the novel were also low stakes because they’ve already happened and we know the outcome. However, the description suggests that Johnston balances the low stakes with high stakes through the new challenges ahead. This really isn’t the case.

Kalanthe’s personal challenge is struggling between her feelings for Olsa and her need to marry in order to pay off her knighthood debts. It’s an internal struggle that involves visiting with an interested man and a lot of chats with third parties. For at least three-quarters of the novel. Olsa’s personal challenge is securing the godsgem, but it really doesn’t come into play until the third act. While the obstacle was certainly dangerous, I knew by that point that it would be quelled pretty quickly and didn’t pose much of a real threat. Therefore, I wasn’t able to invest much in the plot.

If I couldn’t invest in the plot, at least I could invest in the romance, right? Well… not fully. We see Kalanthe and Olsa coming together in “Before” flashbacks from their original quests. These moments were usually sweet, but there weren’t a ton of them. Meanwhile, Kalanthe and Olsa spend the majority of their current timelines apart from each other. If I’m not mistaken, we get 3 scenes of them together in the “After.” The one scene prior to their separation was a frustrated, stilted interaction and I wished for a few moments of these two showing off their chemistry– proving that they still HAVE chemistry– even if they think they can’t be together long-term. Don’t get me wrong, I rooted for Kalathe and Olsa, but I wanted to see more of them together and happy! You can’t just tell me two main characters are in love and essentially leave it at that.

Perhaps what bothered me most was the ending. Kalanthe’s story largely boils down to a massive dose of deus ex machina. She doesn’t know how to compromise between what she wants and what she needs to do, but VOILA! An ideal situation presents itself and requires little to no sacrifice on her behalf. In fact, even if Olsa’s “After” plotline never happened, they could have had the same outcome based on Kalanthe’s convenient storyline alone. Meanwhile, Olsa’s tussle with an ancient power is negated through a “love conquers all” trope. I don’t think it really serves the characters that they don’t have to go through much of anything in the current storyline and somehow get their desired outcome all the same.

Despite my criticisms, I didn’t hate this novel. I just didn’t get what I was expecting. There are good moments. There are side characters that you’ll be glad you spent some time with. The mythology and worldbuilding are definitely upsides. But in terms of both the plot and the romance, this novel just doesn’t deliver. I’m missing out on the “epic” in this epic fantasy.

The Afterward is out on February 19, 2019. You can preorder it now via Amazon or support your local bookstore via Indiebound!

It has been a year since the mysterious godsgem cured Cadrium’s king and ushered in what promised to be a new golden age. The heroes who brought the gem home are renowned in story and song, but for two fellows on the quest, peace and prosperity do not come easily.

Apprentice Knight Kalanthe Ironheart wasn’t meant for heroism this early in life, and while she has no intention of giving up the notoriety she has earned, her reputation does not pay her bills. With time running out, Kalanthe may be forced to betray not her kingdom or her friends, but her own heart as she seeks a stable future for herself and those she loves.

Olsa Rhetsdaughter was never meant for heroism at all. Beggar, pick pocket, thief, she lived hand to mouth on the city streets until fortune–or fate–pulled her into Kalanthe’s orbit. And now she’s quite reluctant to leave it. Even more alarmingly, her fame has made her recognizable, which makes her profession difficult, and a choice between poverty and the noose isn’t much of a choice at all.

Both girls think their paths are laid out, but the godsgem isn’t quite done with them and that new golden age isn’t a sure thing yet.

In a tale both sweepingly epic and intensely personal, Kalanthe and Olsa fight to maintain their newfound independence and to find their way back to each other.

The Fandom’s Most Anticipated YA Books of 2019