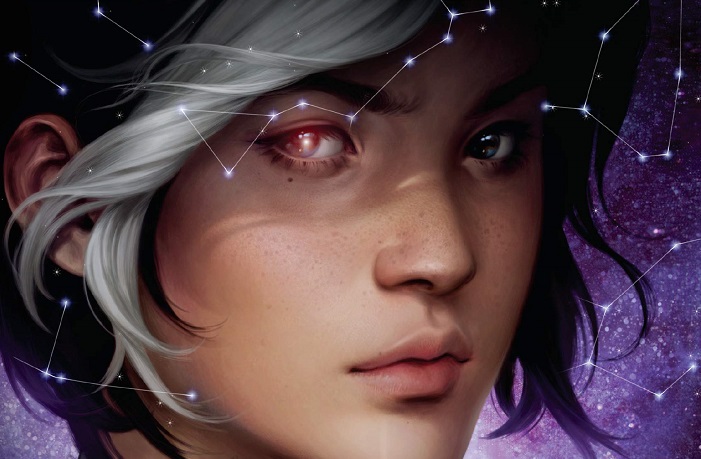 AURORA RISING goes above and beyond with an impressive cast of characters and a sharp story!

Amie Kaufman and Jay Kristoff prove once again that they are a stellar team with Aurora Rising, the start of new intergalactic trilogy that brings together a team of misfits for a wild space adventure!

Aurora Legion goldenboy cadet Tyler Jones could have had any squad he wanted… if only he didn’t miss the draft while saving a stranger’s life. Now, Tyler is captain to the leftovers: Zila, a brilliant scientist who may also be a sociopath, Finn, a tech genius with a serious lack of respect for others, and Kal, an alien warrior who thinks everything is meant to be a fight. The silver lining? He’s also got his twin sister Scarlett, a slick smoothtalker with plenty of sarcasm to go around, and Cat: Feisty, tattooed, the best damn pilot in the legion who absolutely, 100 percent does not have a thing for Tyler. Then again, they may complicate things for him even more…

The most complicated element of all, however, is Aurora Jie-Lin O’Malley. She’s the girl Tyler saved from a near-death in space, waking her from a 200-year cryogenic sleep in the process. Auri knows nothing of the universe as it works now– alien species working alongside humans, intergalactic travel, alien civil wars, and space station life? Those all seem impossible to her. Still, that hasn’t stopped her from being inexplicably targeted by top government oversight organizations and hey, we all know prettyboy Tyler can’t help by protect the innocent, even at his own expense. Outcast and digging themselves deeper by the second, Squad 312 are on a mission to figure out exactly what makes Aurora so enticing to the corrupt people in power and exactly what they’re hiding. Hijinks ensue!

Kaufman and Kristoff’s team-ups are always wickedly satisfying space adventures, mainly because among the intense character moments and wild action, these two just know how to have fun. The sheer joy of their novels doesn’t take away from the characters, all of whom are interesting and stand out in their own right rather than blending together. We loved their spunk, their diversity, and their reactions as they work through an incredible situation. I don’t want to give away the specifics of the adventure, but there’s something for everyone here including action, laughs, emotional turmoil, and definitely some romantic tension.

Really, all these characters added something to the story and none of them drove me crazy (a rarity in a multi-POV novel,) but I definitely have soft spots for Cat, who is an absolute riot but also has some amazing layers, and Kal, who is struggling with internal dilemmas brought on by his cultural background that the others can’t understand… on top of a major crush.

There are a couple things holding me back from a full-blown 5-star rating, however. The authors pitch the novel as Guardians of the Galaxy meets The Breakfast Club, and I definitely see it. In fact, there are certain points that almost felt a little too much like Guardians of the Galaxy. It wasn’t enough to pull me out of the story, but the comparisons poked at my brain now and again. Secondly, the antagonist reveal felt like a similar to the antagonist reveal in Kaufman’s last duology with Meagan Spooner, Unearthed. They are some key differences, of course, but the same core elements are there– though I can’t say more than that without breaching spoiler territory. It made things feel a little less original than the Illuminae Files books, but don’t think for a moment that it stopped me from thoroughly enjoying this sucker, because I did!

Aurora Rising is an absolute win, even if I have a couple hangups. It cements Kaufman and Kristoff as the reigning champions of YA author team-ups with a whirlwind sci-fi heist adventure, superb characters and relationships, and a dash of mystery to keep readers guessing. Squad up!

Aurora Rising (The Aurora Cycle #1) hits bookshelves on May 7, 2019. Preorder it now via Amazon or support your local independent bookstore via Indiebound!

The year is 2380, and the graduating cadets of Aurora Academy are being assigned their first missions. Star pupil Tyler Jones is ready to recruit the squad of his dreams, but his own boneheaded heroism sees him stuck with the dregs nobody else in the Academy would touch…

A cocky diplomat with a black belt in sarcasm
A sociopath scientist with a fondness for shooting her bunkmates
A smart-ass techwiz with the galaxy’s biggest chip on his shoulder
An alien warrior with anger management issues
A tomboy pilot who’s totally not into him, in case you were wondering

And Ty’s squad isn’t even his biggest problem—that’d be Aurora Jie-Lin O’Malley, the girl he’s just rescued from interdimensional space. Trapped in cryo-sleep for two centuries, Auri is a girl out of time and out of her depth. But she could be the catalyst that starts a war millions of years in the making, and Tyler’s squad of losers, discipline-cases and misfits might just be the last hope for the entire galaxy.

They’re not the heroes we deserve. They’re just the ones we could find. Nobody panic.