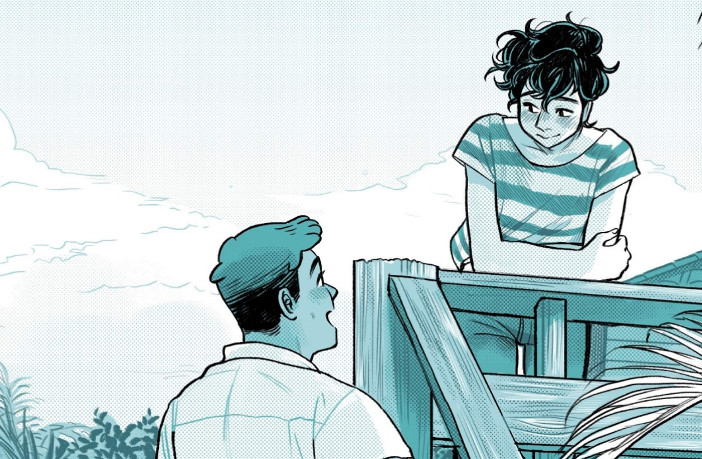 ***Bloom was given to me by the publisher in exchange for an honest review.***

Bloom is a story about a college-aged man named Ari who, being part of a band, plans on leaving his parents bakery business to the big city to live with his bandmates and seek fame. But his parents need his help in keeping the business going or else they might lose everything they’ve worked for.

So, in a last-ditch effort before things are official for his band to leave, he convinces his dad to hire someone outside the family to help for the time being so he can get on his way.

Things seem great with the new hire, Hector, but get more complicated for Ari as he realizes he’s having a good time working alongside Hector as well.

The graphic novel is over 300 pages long, but it took less than a day for me to complete it, so yes, it was a very fast read.

Regarding storyline, the major arc, being that of Ari’s and Hector’s relationship going from co-workers to boyfriends, is cute with nothing too in-depth about its growth, just that they do grow attracted to each other.

The minor arcs are there, but you tend to forget them because they don’t seem to make that much impact to the major arc. There are moments of conflict or tension throughout that seem to work itself out fairly easily, thus not making any impact at all.

Ari continually wavers on what he wants to do, which becomes the major focal issue, but again, it seems to just be resolved after just one setback, albeit a major one. Still, things are fairly easygoing for Ari and Hector, more so than there probably should be in a developing relatonship.

Overall, I enjoyed it for its cuteness, but if you’re looking for something more thought-provoking or deeper than just seeing a young man realize what he finally wants in life, you might need to find it elsewhere.

When it came to the illustrations of the novel, they, too, had a cuteness to them, and when it came to visualizing the bread, it just reminded me of how much I love bread, which can be both a good and a bad thing. Mostly good.

My only caveat would probably be that there were times when Ari looked more like a 12-year-old boy than some 18 or so plus college-aged man. But maybe he’s supposed look like that because he often comes across as immature.

Now, even though Ari and Hector are LGBT characters, the story isn’t just about them falling in love with each other, because even gay people have everyday problems that have nothing to do with being gay, and that’s refreshing.

Bloom it out in stores now, and you can order a copy below: