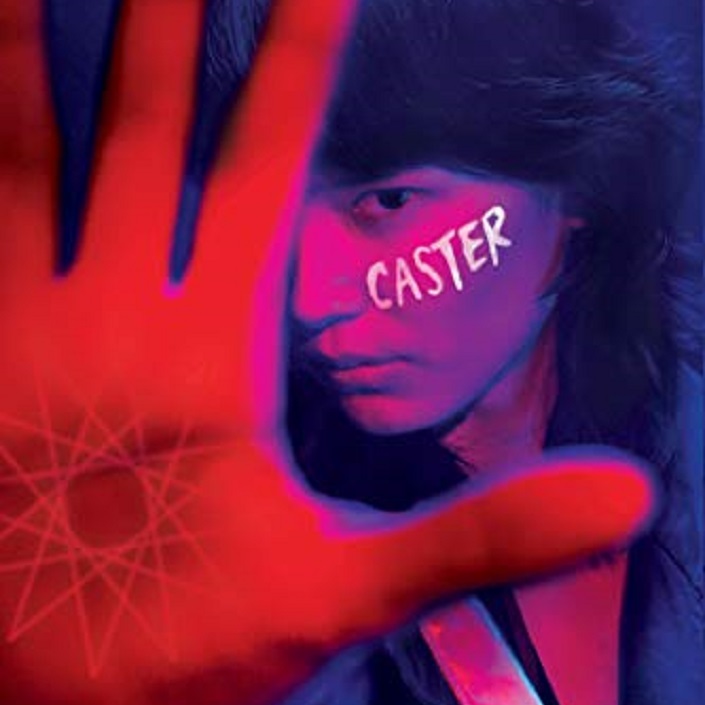 Aza learns that magic comes with a price in CASTER.

Aza has a special skill. She is able to cast “full magic,” meaning her talents are far beyond many others’ when it comes to the magical realm. Such power is far from easy. Using full magic is not only illegal, it’s dangerous. Spells can go awry, crack open the very earth, and leave the caster exhausted and even ill.

But Aza has to take those chances. When her sister, Shire, tragically passed away, the burden of taking care of their parents fell onto Aza’s shoulders. So, secretly, she finds clients who are willing to pay her for her magic. Working as a tutor and in a tea shop are her covers/alibis.

Aza is not the only one performing magic on the side. Rudy, a middle-aged man who owns a tobacco shop, was Shire’s instructor for years. He was there when Shire fell to her death. Suffice to say that Rudy and Aza’s interactions are not the friendliest. Ironically, Aza is present when Rudy takes his last breath, his heart having given out. Worried she could be connected to his death, Aza checks Rudy for any hints that may connect him to her or her family. During her search, she discovers a note in Rudy’s handwriting that lists a time, date, and place. Curiosity gets the best of her, and what she finds, she never expected.

Caster took a while to get going. Personally, I wasn’t engrossed in much of the background information and lead-in that the first quarter of the book explored. The organization was also a bit jarring–flipping from present to past with no real warning. The alternating timeline made it difficult to keep track. Sadly, said confusion only added to the struggle I was having in terms of being interested in the plot.

Fortunately, the plot did pick up and became more investment-worthy. I wish Chapman had started the novel at (approximately) page 50. I think it would’ve captured my attention much faster. The concept of casting magic was well-written and worth dissecting. I wanted more of that action instead of hearing about Aza’s family’s past.

Unfortunately, Aza never completely sold me as a protagonist. Her magical ability was just about the only trait that made her stand out to me. Sadly, she and other characters were pretty forgettable. So, if you are more of a character-oriented person, Caster may not be for you. But if plot is your top priority in a novel, it could (eventually) be worth the read.

You can grab a copy of Caster now via Amazon or Indiebound.

If the magic doesn’t kill her, the truth just might.

Aza Wu knows that real magic is dangerous and illegal. After all, casting killed her sister, Shire. As with all magic, everything comes at a price. For Aza, it feels like everything in her life has some kind of cost attached to it. Her sister had been casting for money to pay off Saint Willow, the gang leader that oversees her sector of Lotusland. If you want to operate a business there, you have to pay your tribute. And now with Shire dead, Aza must step in to save the legacy of Wu Teas, the teahouse that has been in her family for centuries.

When Aza comes across a secret invitation, she decides she doesn’t have much else to lose. She quickly realizes that she’s entered herself into an underground casting tournament, and the stakes couldn’t be higher. Real magic, real consequences. As she competes, Aza fights for her life against some very strong and devious competitors.

When the facts about Shire’s death don’t add up, the police start to investigate. When the tributes to Saint Willow aren’t paid, the gang comes to collect. When Aza is caught sneaking around with fresh casting wounds, her parents are alarmed. As Aza’s dangerous web of lies continues to grow, she is caught between trying to find a way out and trapping herself permanently.