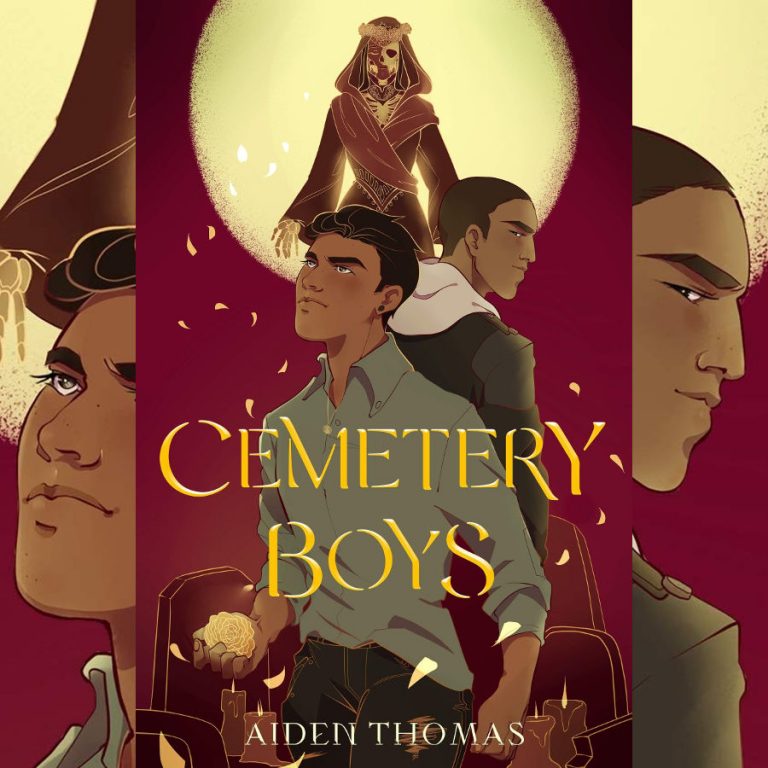 Aiden Thomas makes sure they are unapologetically Latinx and queer with their debut novel, CEMETARY BOYS.

I loved how the book was about being accepted as someone who is trans in the Latinx culture with a paranormal setting. I thought it was beautifully done, both how it was written and the way the story was told. Aiden, who goes by he or they, is so talented in his writing and in their word-craft, that even with me being a cis male, I still felt the pain that Yadriel felt whenever his father or family would make certain comments. I could feel my heart sink at words that were said and would physically gasp. It’s amazing that Aiden was able to give everyone a bit of a understanding when it comes to the struggles of being trans on a personal note. And on that alone, I give Aiden all the props in the world.

There were things that were included, aside from his family, that showed the struggle and the journey that Yadriel had to go through being a trans man. From wearing a chest binder and to being comfortable in using certain rooms. Being able to go inside Yadriel’s mindset, I think it’s very thought-provoking on what it means to be trans and wanting acceptance. And I honestly believe it’s perfect for people who don’t fully understand the trans community but want to. Cemetery Boys is certainly powerful enough to get people talking and in normalizing this perfectly normal thing in places that consider it different.

I can sit here all day and talk about how Aiden can help change the literary world and its acceptance, but there’s other parts of the book that deserve as much praise. When I said the book was unapologetically Latinx, I meant it. Through the entire book we are handed phrases and words on a silver platter. I enjoyed how they let the readers grow with it. In the beginning, the words and phrases were said in English right after, but as the book went, it became more about context clues and suddenly you find yourself fluent in Spanish.

I loved how so many foods and desserts were mentioned that my mouth was watering nonstop. I found myself wanting to eat everything that was mentioned as I read the book. Lucky for me, there’s a million and one restaurants and bodegas that helped me with that. It just felt so rich with the Latinx culture and it’ll definitely have people who aren’t familiar with the foods, googling it. I also enjoyed how it was full of people and foods from different countries of the Latinx community and that it gave us a little bit of everything.

One of my favorite parts definitely had to be the brujx aspect of it. Having Mexican friends, I was already aware of Dia de Muertos, Day of the Dead, and how it’s this big celebration in their community. But reading about it made me appreciate it even more. Seeing all the work that they have to go through to honor their family that they love, I know I keep saying the word beautiful, but it was absolutely beautiful. With Aiden’s writing, the colors and imagery were so vivid that it felt like you could see it right in front of you.

And even the whole paranormal side of it, from the spirits of the dead walking around. I thought it was so cool how the brujx worked. Which is were Julian came in. In the beginning we find out that one of Yadriel’s cousin, Miguel, dies but no one can find him nor his body. And to prove that he really is a man, Yadriel uses his powers and accidentally summons the ghost of Julian. I was very intrigued by the story and wanted to know what was happening. And let me tell you, I would never have guessed that ending. It caught me by complete surprise even when I had a slight suspicion at one point. We spend the entire book wondering what happened to Julian and Miguel and how they can be connected if at all.

And even while being engrossed on that side of the story, you find yourself falling in love with these characters. The chemistry that Yadriel and Julian had, and even how Yadriel and Maritza interacted as family and best friends was refreshing. You could feel the love the entire family had for each other, and not just Yadriel’s family, but Julian’s. It really makes you sit there and think about these characters and truly fall in love with them all.

I also thought it was brilliant with how even though the book didn’t focus on a lot, we still saw the struggles of the Latinx community and deportation and being homeless and even living in a broken family. Even just by touching on some of these subjects or making them be part of background characters, we were told so much about the world and the community that many people keep pushing away.

Aiden Thomas wrote a debut, and I hope they continue writing for the rest of their lives. They’re smart, they’re quick, and they know exactly how to engage a reader with fun and make sure they learn something in the process. I also hope Cemetery Boys comes to a screen near us because its world is so bright and vivid that it would be a crime to not let it be filmed!

Cemetery Boys by Aiden Thomas will launch into your hearts and wherever books are sold on September 1, 2020, and you can pre-order your copy through the following links.