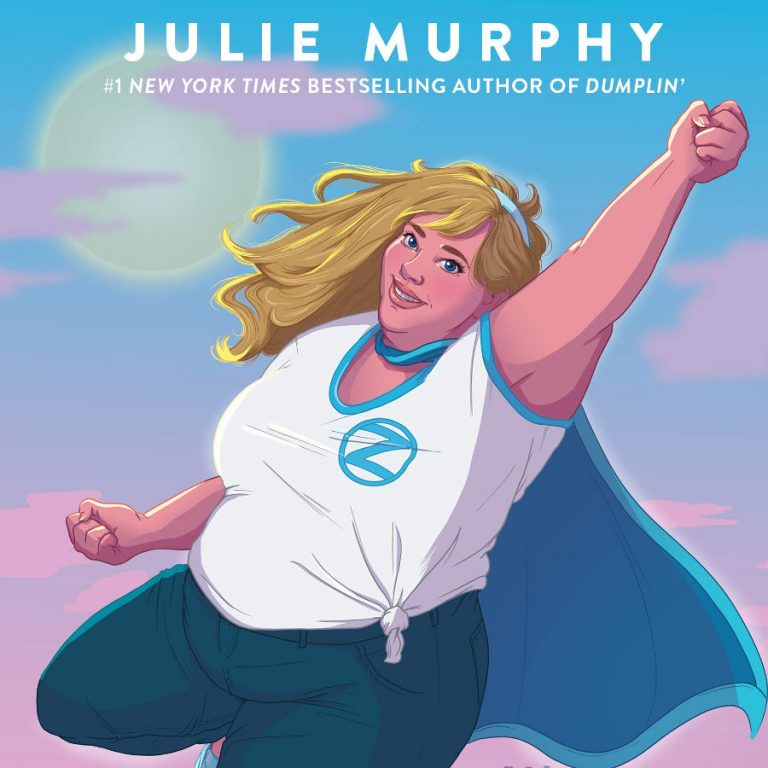 Julie Murphy has us flying through wild plot lines in FAITH: TAKING FLIGHT.

It wasn’t until I got towards the end Faith: Taking Flight by Julie Murphy that Google told me the story originated in the 90s. I was shocked and almost a bit relieved to find out that the main character, Faith Herbert, is a character from a comic series. This novel is the origin story in a prose format that follows the same story in the comics. Finding out this information made me change my review a bit because now I see it in a different light. That being said, my thoughts on the novel are still the same.

The novel follows the story of Faith Herbert who gets approached by a mysterious man who tells her he can give powers. With nothing to do during summer vacation, Faith, a self-described badass fat girl, takes the opportunity and ends the summer knowing how to fly. Within the first few pages, what the synopsis tells us is what we get. But then we seem to steer off course and into a different territory.

Let me start off by saying I enjoyed the book to a certain extent. While I did have fun reading the book, I did think it got a bit messy. I found myself flying through the pages, pun intended, because I wanted to know what would happen next. Murphy knows how to keep the readers engaged with the story. The problem with it was that there was too much going on.

Within the first fifty pages, we’re introduced to about six or seven different story lines. It was like every chapter we got to, it seemed to become a different book with a different plot. And at one point I thought that the plot lines could’ve easily been split into two books. With each change, the tone of the book seemed to change, from contemporary, to sci-fi, to romance, and mystery to name a few. And while the book seemed fun and fluffy in the beginning, it began to build into this sense of urgency and seriousness that threw me off.

It wasn’t until the end when the plot lines began to add up. The effect was definitely a eureka moment for me, but it would have been better if there weren’t too many things going on. Some of the story lines seemed a bit random until they were given a purpose. And it almost seemed like they were different ideas from multiple books. One thing that I was disappointed with was that the whole flying part seemed a bit forgotten.

The time she spent getting her powers was given to us briefly, which I’m hoping we get to see more of in the sequel. But it isn’t until the very end when that part of the story starts making sense and by then I wasn’t sure if it felt right in the book. I would definitely say it’s because of what felt like the constant genre shift.

I honestly enjoyed the characters and the way Murphy wrote them. Despite the story, she made sure that each one of the characters had their time to shine and were essential to the plot. I especially enjoyed Faith and how comfortable she was with her weight. She never made any excuses for herself and she never said anything that could be considered negative. Definitely an A+ on that.

And I really liked the last few chapters of the book when things started picking up. It made me want to read the second book, despite my trouble with the first, to find out what is going to happen. I want to know more about the guy and his group that gave Faith her powers. And I want to know more about everything else that came into the light by the end. Especially certain characters…(no spoilers here).

Earlier I mentioned how this is based off comics and that’s where it affects my review. In the beginning I thought, this book was super messy. It almost felt like it was a script for a television show that someone added more details too. But that’s when it hit me. After learning about the comics, I could see why the plot lines felt random. The book would definitely read better in comic form with multiple issues. Almost as if it’s not meant to be read in one shot, but little by little.

So while the book was a bit of a miss for me, Julie Murphy still has a way of wrapping you in her words and wanting more. With that being said, if you’re looking for something that’s just fun and a quick read, Faith is definitely the girl for you.

Faith: Taking Flight by Julie Murphy will fly into stores and online July 07, 2020 and you can pre-order a copy of the book using the links below:

From Julie Murphy, #1 New York Times bestselling author of Dumplin’, comes the first in a two-book origin story of Faith, a groundbreaking, plus-sized superhero from the Valiant Entertainment comics.

Faith Herbert is a pretty regular teen. When she’s not hanging out with her two best friends, Matt and Ches, she’s volunteering at the local animal shelter or obsessing over the long-running teen drama The Grove.

So far, her senior year has been spent trying to sort out her feelings for her maybe-crush Johnny and making plans to stay close to Grandma Lou after graduation. Of course, there’s also that small matter of recently discovering she can fly….

When the fictional world of The Grove crashes into Faith’s reality as the show relocates to her town, she can’t believe it when TV heroine Dakota Ash takes a romantic interest in her.

But her fandom-fueled daydreams aren’t enough to distract Faith from the fact that first animals, then people, have begun to vanish from the town. Only Faith seems able to connect the dots to a new designer drug infiltrating her high school.

But when her investigation puts the people she loves in danger, she will have to confront her hidden past and use her newfound gifts—risking everything to save her friends and beloved town.