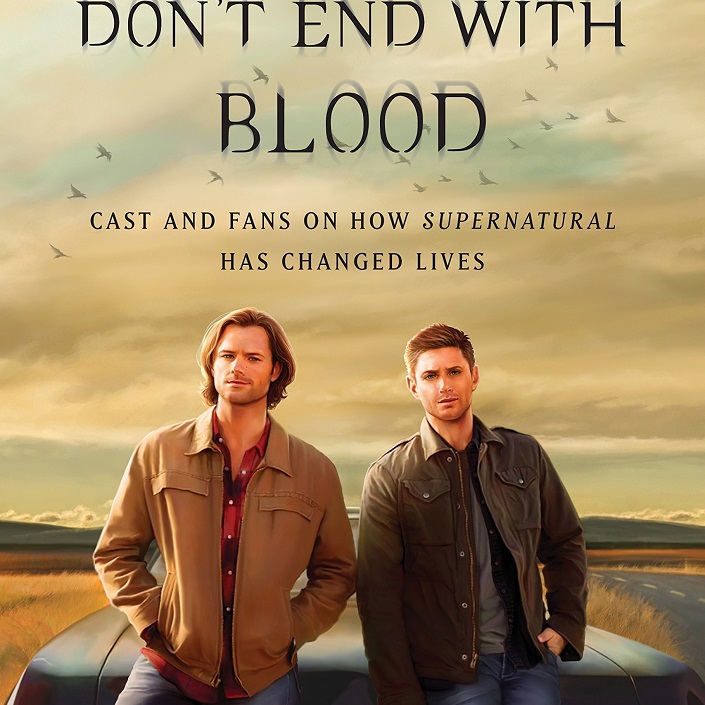 With tales from SUPERNATURAL’s cast and fans about how the show has impacted their lives, FAMILY DON’T END WITH BLOOD is a must-read for any SPNFamily member.

The longtime running sci-fi series Supernatural is something special.

So special, in fact, that SPN has not only changed lives, it has saved them. Speaking from experience, it’s impossible not to be affected by others who share the same enthusiasm for the Little T.V. Show That Could.

In Family Don’t End with Blood, actors (including Jared Padalecki, Jensen Ackles, Misha Collins, and Mark Sheppard) and fans bare their souls to celebrate the one-in-a-million bond that lies between those who work on the show and those who watch it in their living rooms. There are tales of depression, anxiety, sobriety, cancer diagnoses, finding oneself, and plenty more. But no matter the details, they are stories of triumph.

Along with writing her own chapter, editor and psychologist Lynn Zubernis (whom you may know better as Fangasm) penned an insightful introduction to the book. She explains that even though being a “fan” of something was generally looked down upon not so long ago, being into a show is good, healthy thing. Fandom environments encompasses basic human needs like acceptance, belonging, friendship, and passion. There’s no need to feel ashamed. Love what you love.

I put off reading Family Don’t End with Blood for a couple of years after learning about it because I had no doubt that it would be an emotional read for me. It absolutely did not disappoint in that manner (or, honestly, any other manner). Tissues were necessary several times, but the tears that flowed were good ones. They were from the relief of being understood by this tight-knit group of fans. I should’ve read the book the moment it arrived in the mail…

I never tire of hearing how people got into Supernatural or why the show is so special to them. It’s a true bonding experience in the SPNFamily. So many are brave enough to be open about their love of fandom and their personal highs and lows. I was honored to read every single chapter in the book because so much passion went behind each person’s words. Having been uplifted by these people’s journeys, I can say that my life is richer after finishing Family Don’t End with Blood. I extend my greatest thanks to Zubernis and everyone else involved.

Although it sounds counterintuitive, I would argue that Family Don’t End with Blood is a worthwhile read for anyone. Do you have a Supernatural fan in your life and want an inside look at what their world is like? There is much to learn and experience in these chapters. Or are you simply a fan of something? A T.V. show, a movie, a book? The SPNFamily’s words will hit home and ring true. Heck, would you simply enjoy an inspirational read? Every chapter has a positive spin.

Bottom line: You want this book on your shelf, and you want its words in your heart.

Family Don’t End with Blood is available for purchase on Amazon or Indiebound.

How a Show, and the Support of Its Fandom, Changed—and Saved—Lives

May 2017 marks the end of the twelfth season of the CW hit Supernatural, a television show about two demon-hunting brothers (and an angel) that is at the center of a fan community as tight-knit as family—a virtual support system that spans the globe. The three-time People’s Choice Award winner for Favorite Sci-Fi/Fantasy TV Show and Tumblr’s 2015 Most Reblogged “Live Action TV” show has made a name for itself by supporting and encouraging its fans to “always keep fighting,” a main theme echoed in the show, and demonstrating the inspiring truth to a memorable line from early in the show’s run: “Family don’t end with blood.”

In twenty powerful chapters written by Supernatural’s actors and fans, including series lead Jared Padalecki, Family Don’t End with Blood: How Supernatural Has Changed Lives examines the far reach of the show’s impact over the last eleven years. Supernatural has encouraged fans to change their lives, from getting “sober for Sam” to escaping a cult to pursuing lifelong dreams. But fans aren’t the only ones who have been changed. The actors who bring the show to life have also found, in the show and its community, inspiration, courage, and the strength to keep going when life seemed too hard.

In keeping with the show’s message to “always keep fighting,” and to support the important work of combatting stigma and encouraging those who are struggling to speak out, a portion of the proceeds from the book will be donated to charity Attitudes in Reverse, whose mission is to educate young people about mental health and suicide prevention.

Edited by Lynn S. Zubernis, a clinical psychologist, professor, and passionate Supernatural fangirl, Family Don’t End with Blood provides an insightful and often uplifting look into the way international fan communities become powerful, positive forces in the lives of so many.

Interested in my personal Supernatural story? You can read it here.