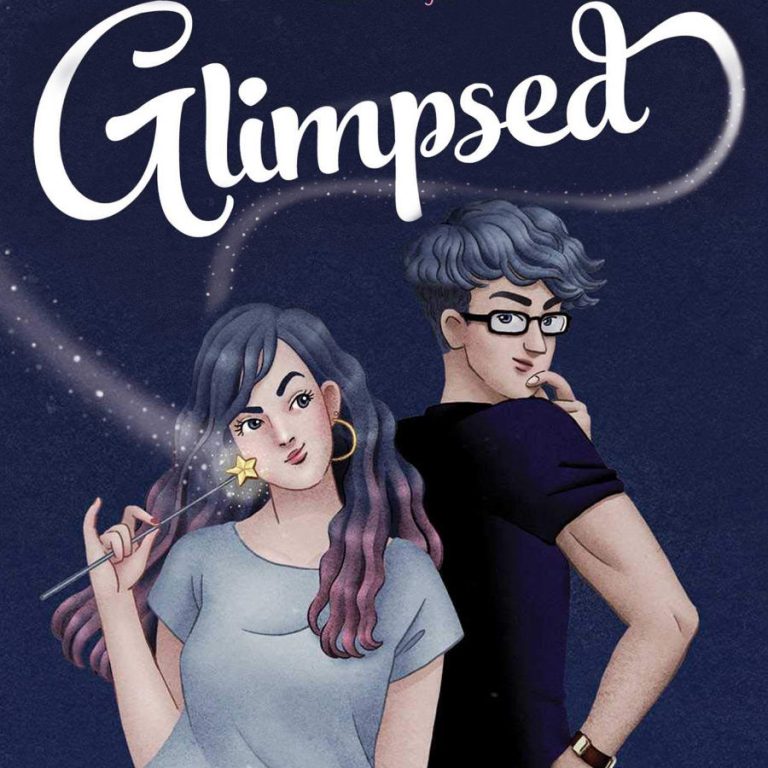 With multiple characters to love, a romance that makes your heart burst, and lots of magic, Glimpsed by G. F. Miller is a wish-granting entertaining read. The plot follows Charity, a kindhearted teen whose sole goal in life is to grant the wishes of the ‘cindys’ she encounters, and her relationship with Noah, a rival who questions her moral responsibility as a ‘fairy godmother’.

Based loosely around the idea of fairy godmothers from fairytales (specifically Cinderella), Charity was born into a family whose women have the ability to ‘nudge’ (or suggest telepathically) different emotions/thoughts into someone’s head for a short period of time. Along with this ability comes the ability to ‘glimpse’ or see what should happen in the future to a random cindy. According to Charity’s grandmother, these glimpses cannot be ignored and the universe has a goal and a purpose for each one. Unsurprisingly, there are varying opinions from different characters: Charity’s mother and sister believe Charity should just ignore the ‘glimpses’ and carry on life without helping her cindys accomplish the universe’s goal for them.

As the book develops, Charity faces the question: Am I really doing the right thing by these cindys? Or am I just hurting them in the long run? This questioning of her moral standing was brought up by a cute trekkie she met (who sprayed her with pepper spray!): Noah. Noah catches onto Charity’s ‘schemes’ and ‘manipulation’ with her different cindys and threatens to expose her if she doesn’t help him win back his childhood friend and possible lover Holly (whom Charity had previously dubbed a Cindy and helped to date the quarterback). This blackmail-based relationship eventually evolves from enemies to real friendship as Noah learns of Charity’s true intentions and powers. The romantic tension between the two skyrockets as Charity finds herself falling for Noah… bad.

With lots of fandoms built in (Star Trek and Marvel to name a few), this book brings out the inner dork (or dork lover) in all of us. Noah is an adorkable guy with intense knowledge of Star Trek and a love for his family. Cute as a button, he gives Charity the companionship and belief in herself she didn’t know she needed (but desperately did). This book plays on a familiar stereotype — the nerdy boy gets the hot and popular girl. Not only is this a great step forward for society as a whole, this plotline allows guys to see that they don’t have to be perfect or uber attractive to get the girl of their dreams… they just have to be a kind person.

Can we just talk for a second about the name Charity and its greater meaning to the book as a whole? Charity was willing to give up everything… her happiness, her free will, her time, her energy, heck she was even willing to hurt herself (she would get bad headaches) in order to help others achieve their greatest wish (or so she believed). G. F. Miller did a great, albeit completely obvious, play on words by naming the MC “Charity” (similar to all of the bread puns in the Hunger Games — if you know, you know,) as Charity was so very charitable to everyone around her. Her kind nature and willingness to help others really makes readers fall in love and care about her, wanting her to get the happy ending she deserves.

While Glimpsed was overall a fun and entertaining read, it was pretty surface level with its analysis of society. I loved that I didn’t really have to think while reading this book, but if you’re looking for a challenging book that will enlighten you about the 8th wonder of the world… this might not be the book for you. Its straightforward nature is totally perfect for a book you’re reading in your free time — just don’t expect to see it as a required read in AP Literature. Along with its lack of complexity, there were too many subplots that made it confusing at times, with all of the different cindys Charity was helping. I understand the need for the different characters Charity took under her wing, but the quantity swayed the reader off course and got the main plot a bit muddled.

Glimpsed is out now and you can get your copy through the following links:

Perfect for fans of Geekerella and Jenn Bennett, this charming, sparkly rom-com follows a wish-granting teen forced to question if she’s really doing good—and if she has the power to make her own dreams come true.

Charity is a fairy godmother. She doesn’t wear a poofy dress or go around waving a wand, but she does make sure the deepest desires of the student population at Jack London High School come true. And she knows what they want even better than they do because she can glimpse their perfect futures.

But when Charity fulfills a glimpse that gets Vindhya crowned homecoming queen, it ends in disaster. Suddenly, every wish Charity has ever granted is called into question. Has she really been helping people? Where do these glimpses come from, anyway? What if she’s not getting the whole picture?

Making this existential crisis way worse is Noah—the adorkable and (in Charity’s opinion) diabolical ex of one of her past clients—who blames her for sabotaging his prom plans and claims her interventions are doing more harm than good. He demands that she stop granting wishes and help him get his girl back. At first, Charity has no choice but to play along. But soon, Noah becomes an unexpected ally in getting to the bottom of the glimpses. Before long, Charity dares to call him her friend…and even starts to wish he were something more. But can the fairy godmother ever get the happily ever after?

Book Review: HOW THE MULTIVERSE GOT ITS REVENGE by K. Eason