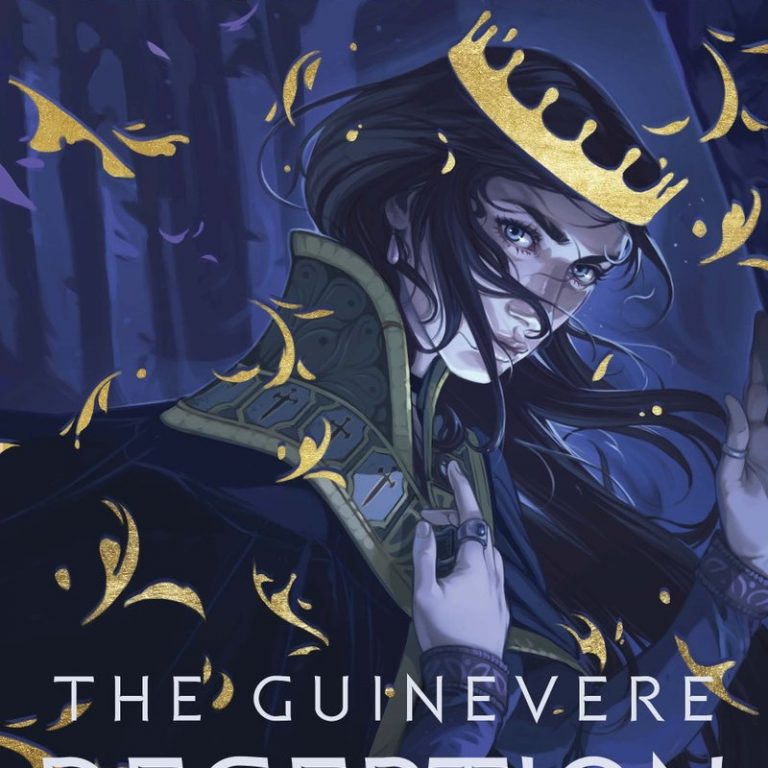 If there’s one thing to be said about Kiersten White, it’s that she isn’t afraid to play in any damn sandbox she’d like, thank you very much. Her works have taken on the supernatural, magic, historical fiction, horror, fairy tales, and folklore. This time, she’s diving into Arthurian mythology with The Guinevere Deception!

We’ve all probably heard at least a few legends surrounding Camelot– The sword in the stone, the knights of the round table, and the kingdom’s eventual downfall. Kiersten White’s story starts with a major detail that changes everything you know: “Guinevere” is not truly Guinevere. She is the daughter of Merlin; a protector sent to watch over the young King Arthur while playing his wife, harboring illegal magic and dark secrets of her own.

As dark magic threatens Camelot, Guinevere must discover its source and protect Arthur at all costs, all while keeping her true powers a secret. As the chaos rises around them, Camelot will need more than magic to save it from the dark reaches beyond.

Despite its roots in legends, The Guinevere Deception still does a lot of setup to make sure everyone is up to speed. It introduces the world to those who aren’t familiar and highlights differences for those who are. This makes for a slower opening, but it feels pretty necessary for the rest of the story. Plus, it takes time to introduce us to the best part of the story, in my opinion: The character relationships!

There’s something that always gets me about characters rediscovering themselves in a new place. Guinevere doesn’t think she’s had much contact with the outside world (there are some very suspicious memory gaps there!) and so there’s something special about watching her form relationships. Her sweet friendship with Brangien is a joy to watch unfold and I very much enjoyed that the character was a play on another legend: Tristan and Isolde. She has great chemistry with Arthur, a genuinely good and just person who knows her mission, but she also has a lot of internal strife around play-acting as his wife. I loved the scenes between them because you could feel the push-and-pull between their agreement-based professionalism and their longing. There’s also a couple characters that Guinevere forms important alliances with that could be more, including Arthur’s nephew Mordred (who’s actually a year older than Arthur, thanks to a wild family history) and Lancelot, who comes at readers from a delightful new angle.

It’s hard to describe the plot of The Guinevere Deception without giving too much away, but let’s just say things really pick up in exciting ways as the story goes on. Though decidedly less dark than the And I Darken series or The Dark Descent of Elizabeth Frankenstein, White continues to inject some more modern sensibilities into the story, including LGBTQ rep and more feminist viewpoints. It makes things more exciting, but doesn’t completely change the world. In fact, if you’re super familiar with Arthurian legend, there are a few things you’ll see coming. However, it didn’t detract from my enjoyment.

If you love tales of royalty and knights and magic, you’ll be plenty thrilled by Kiersten White entering the fray of battle!

The Guinevere Deception is out now. You can snag a copy for yourself via Amazon or support your local independent bookstore via Indiebound!

There was nothing in the world as magical and terrifying as a girl.

Princess Guinevere has come to Camelot to wed a stranger: the charismatic King Arthur. With magic clawing at the kingdom’s borders, the great wizard Merlin conjured a solution–send in Guinevere to be Arthur’s wife . . . and his protector from those who want to see the young king’s idyllic city fail. The catch? Guinevere’s real name–and her true identity–is a secret. She is a changeling, a girl who has given up everything to protect Camelot.

To keep Arthur safe, Guinevere must navigate a court in which the old–including Arthur’s own family–demand things continue as they have been, and the new–those drawn by the dream of Camelot–fight for a better way to live. And always, in the green hearts of forests and the black depths of lakes, magic lies in wait to reclaim the land. Arthur’s knights believe they are strong enough to face any threat, but Guinevere knows it will take more than swords to keep Camelot free.

Deadly jousts, duplicitous knights, and forbidden romances are nothing compared to the greatest threat of all: the girl with the long black hair, riding on horseback through the dark woods toward Arthur. Because when your whole existence is a lie, how can you trust even yourself?