Book Review: HERO AT THE FALL by Alwyn Hamilton

Alwyn Hamilton immerses readers in the world of Amani once again as the Rebels overcome new challenges and face even harder decisions than before. Fighting in a war where neither side rests means that unfortunately, not everyone will make it. It’s up to Amani and the Rebel leaders to make sure that they prevail and bring “a new dawn, a new desert.”

Honestly, it’s hard to give a detailed synopsis for Hero at the Fall because it’s such an action-packed book. I would love to talk about a few specific events that really took me by surprise, but they would all be spoilers. However, I will say there are plenty of battles, magic, romance, secrets, and unexpected appearances from new and old characters. To give a slightly simplified version, Hero at the Fall picks up exactly where Traitor to the Throne left off. Amani struggles to lead the Rebellion and find a way to defeat the Sultan after the loss of crucial members of the Rebellion.

In terms of the plot and characters, this is one of the books that seems to fall under an “it’s me, not you” type of situation. While I know a lot of people enjoyed Hero at the Fall, I found it a bit mediocre, which I chalk up to my lack of interest in reading lately, but also the writing style. Because the plot revolves heavily on action, there are so many events happening one right after another, which usually makes the book gripping, but I felt ironically underwhelmed by the overwhelming number of events. Since things were happening every second, there was no time to build suspense and really create a sense of urgency. As a result, I felt that events were being tossed at me one after another, and it just started becoming this repetitive pattern. Following this, it seems like description and detail were sacrificed in favor for more action scenes, which is completely fine, but I think this made it a bit difficult for me to get into Amani’s character. Her narrative was a bit bland and provided a lot more telling than showing.

So if I wasn’t really a fan of the plot or characters then why still give it 3.5 stars? Well, I actually really enjoyed the first third of the novel. I think this part appealed to me more because I liked the pacing in this section. Since it’s the beginning of the novel, the reader isn’t thrown into the midst of things. We’re eased in more slowly, and there’s not as much happening so we get more details and time to familiarize ourselves with the characters again. Once the middle hit, I became a bit bored with the plot. However, the third part of the novel made me bump up my rating. This was my favorite section of the novel because of surprise character appearances and also because Amani’s character development was finally in play. I didn’t really feel like her character developed much in the first half of the novel, but her character arc in the last part was done really nicely, and that’s when I started liking her character.

When it comes to characters, I oddly liked the side characters more than the main character. Don’t get me wrong, I loved Amani in the first book, but after a while I felt like she wasn’t really growing. On the other hand, I really liked the side characters, especially Sam and Shazad. The side characters were a bit stereotypical in the terms of the roles they played, but I really liked Sam because he provided a much-needed comic relief between all the action and battles. I also really liked how the romance fell into the background rather than a part of the main focal point. I think that worked really well in this novel and fit the plot a lot better than it would have as a strong focus.

In terms of world building, nothing really stood out to me in all honestly. There’s a significant amount of traveling though, and the Rebellion visits new places that lead to new discoveries (I can’t say much because of spoilers), but they also return to familiar places like the Dustwalk and the Sultan’s home.

One unique thing that stuck out to me in particular was the storytelling narrative included near the end of the novel. I felt like that added another layer to the story and made the ending even more satisfying.

Overall, I think fans of Rebel of the Sands and Traitor to the Throne will enjoy Hero at the Fall. It’s a solid conclusion to the trilogy with moments that will make heart race and ache.

Hero at the Fall releases March 6, 2018, make sure to grab your copy to find out what happens to the Rebels! You can preorder now via Amazon, Barnes and Noble, or IndieBound! 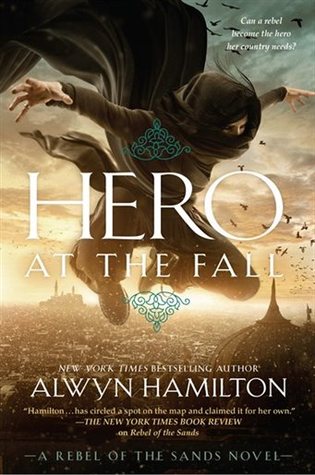 When gunslinging Amani Al’Hiza escaped her dead-end town, she never imagined she’d join a revolution, let alone lead one. But after the bloodthirsty Sultan of Miraji imprisoned the Rebel Prince Ahmed in the mythical city of Eremot, she doesn’t have a choice. Armed with only her revolver, her wits, and her untameable Demdji powers, Amani must rally her skeleton crew of rebels for a rescue mission through the unforgiving desert to a place that, according to maps, doesn’t exist. As she watches those she loves most lay their lives on the line against ghouls and enemy soldiers, Amani questions whether she can be the leader they need or if she is leading them all to their deaths.