Book Review: HOW TO BUILD A HEART by Maria Padian 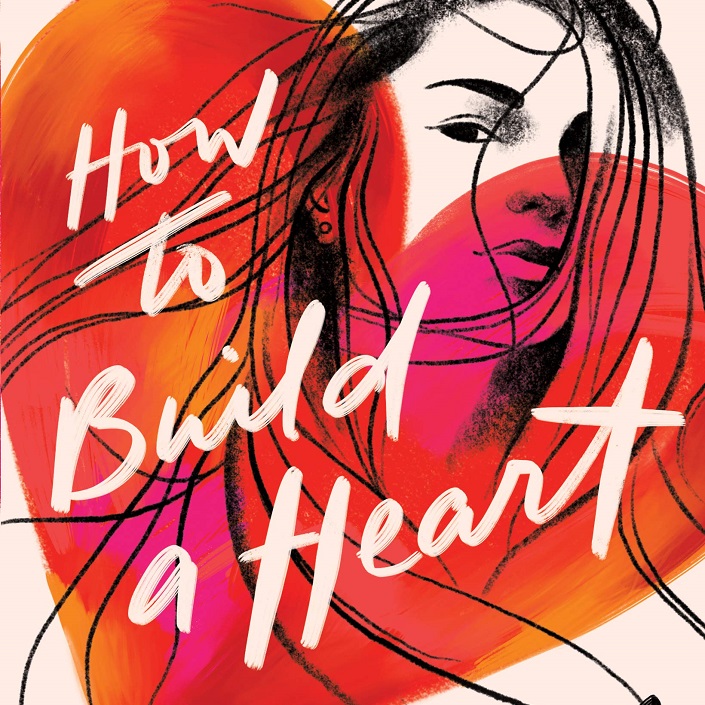 Izzy Crawford’s life has been a whirlwind since her father, a marine, was killed in action six years ago. While her mother works hard for them, their cautious stability is hard-won. Izzy is just starting to cement her life in their latest town, complete with new friends and a forbidden boy who’s caught her eye, when her family is given an incredible opportunity to have a house built through Habitat for Humanity. Izzy is ready to put in the work required, but advertising to the whole community that her family is poor and struggling– a detail she’s carefully hidden from almost everyone she knows– will challenge her in ways she never expected.

With two worlds colliding fast, Izzy must confront her past, including her father’s estranged family, and her present, including complex new relationships with people who don’t know her whole story and her abused, troubled best friend from the neighborhood, to find out who she is.

Izzy and Sam’s relationship is a slow build into something adorable, and it contains a perfectly realistic amount of teenage drama surrounding exes and social media. Of course, it’s perhaps a little too convenient that Izzy only has two good friends established in the novel and both are hesitant about them being together– One is Sam’s sister, the other is a stalker lite who has had a crush on Sam for ages. The relationship drama gets a little wild in that sense, but Izzy and Sam have chemistry that you’ll root for above all else.

How To Build A Heart is, at its core, a contemporary romance. But it also strives to be more than that. It’s a story of family, friendship, and the bonds that get us through. Izzy actually has an actively involved parent and a super sweet little brother that are featured regularly. She has Aubrey, a more recent friend who is a bit awkward and sees her as a mentor. The long-lost family angle is non-traditional and super interesting. But the character that adds the most dimension is Roz, Izzy’s “bad” friend whose life has been much harder and who isn’t necessarily welcomed into the Crawford home with open arms.

The novel is simple, sweet, and bursting with hope, which would probably be enough for plenty of readers. For me, the fact that everything works out perfectly for everyone in the end felt a little oversimplified. Of Izzy’s many storylines and relationships in the book, only one tows the line of “Everything will not work out how you want it to,” and even that ultimately lands on “Everything will MOSTLY work out the way you want it to.” There’s nothing wrong with hope and happy endings, but there was definitely some cookie cutter convenience.

The characters all had unique voices and quirks, but on the whole Maria Padian’s writing style is very straightforward. A little more flourish to bring the character emotions to the surface might have served the story better. More dialogue would have helped me connect as well, as readers spend much more time in Izzy’s head than they do watching her interact with others. Overall, the book has its touching moments that will make readers feel good, but it won’t really surprise anyone as the story goes on.

How To Build A Heart hits shelves on January 28, 2020. You can preorder it now via Amazon, via Barnes & Noble, or by supporting your local independent bookstore via Indiebound.

One young woman’s journey to find her place in the world as the carefully separated strands of her life — family, money, school, and love — begin to overlap and tangle.

All sixteen-year-old Izzy Crawford wants is to feel like she really belongs somewhere. Her father, a marine, died in Iraq six years ago, and Izzy’s moved to a new town nearly every year since, far from the help of her extended family in North Carolina and Puerto Rico. When Izzy’s hardworking mom moves their small family to Virginia, all her dreams start clicking into place. She likes her new school—even if Izzy is careful to keep her scholarship-student status hidden from her well-to-do classmates and her new athletic and popular boyfriend. And best of all: Izzy’s family has been selected by Habitat for Humanity to build and move into a brand-new house. Izzy is this close to the community and permanence she’s been searching for, until all the secret pieces of her life begin to collide.

How to Build a Heart is the story of Izzy’s journey to find her place in the world and her discovery that the choices we make and the people we love ultimately define us and bring us home.