Book Review: I’M NOT DYING WITH YOU TONIGHT by Kimberly Jones and Gilly Segal 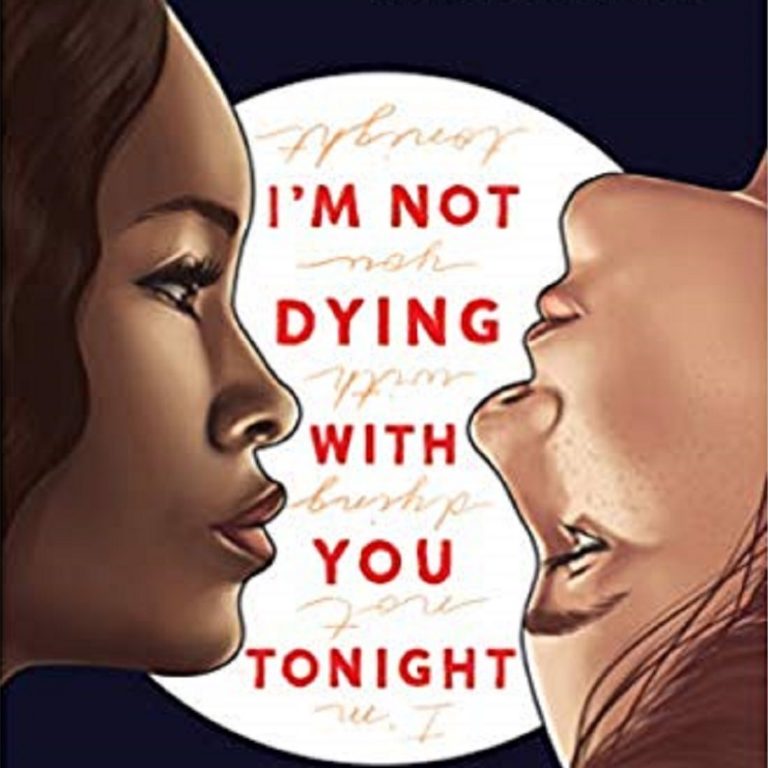 Two students from very different worlds must come together when faced with a ever-growing threat in I’M NOT DYING WITH YOU TONIGHT!

Lena and Campbell go to the same large Georgia high school, but they don’t really know each other. Lena has an established life with a social circle of her own and big dreams to boot, while Campbell is the new girl struggling to acclimate thanks to her absentee parents.

Both attend the Friday night high school football game for reasons other than school spirit– Lena is watching a friend perform at halftime and Campbell is stuck volunteering at the concession stand. As a racial slur turns into a fight and a fight turns into a mob, Lena and Campbell end up stuck in the concession stand (more of a shack, really) together. The two girls aren’t friends by any means, but it soon becomes clear that they’ll need each other to get through the riot that’s consuming their city.

The story takes place in a few settings, but the main two are the football field, where the massive fight begins, and the city’s main street, where a peaceful protest against the growing bigotry in the community turns into a full-scale riot. While trying to find safety and loved ones, Lena and Campbell find themselves in both locations. In the midst of it all, authors Kimberly Jones and Gilly Segal do a great job showing how quickly a situation can escalate when fueled by rage and violence. This is particularly true in the latter section of the book, in which a peaceful protest grows into something destructive thanks to a small population of agitators, including white supremacists and opportunists, who seep in around the people with a message. It also explores the role that police officers play when they attempt to control a situation by damning everyone caught in the fold, including those who don’t want to be there. The authors mention in the acknowledgements that they spoke to real-life riot survivors and it shows in the authenticity you feel on the page.

The conversation around race in I’m Not Dying With You Tonight is central to the plot. First off, the events that Lena and Campbell are caught up in are a direct result of growing racial tensions following other community and political incidents. But in a more up-close sense, Lena is black and Campbell is white. As their journey unfolds through alternating POV chapters, you see their assumptions and biases, the ways they stereotype and misconstrue one another. Still, it’s not as much of a focal point between the two as you might imagine. They do have a brief argument over an ignorant assumption made by Campbell at one point, but they’re quickly distracted by another conundrum. Perhaps the authors were trying to show that race doesn’t really matter when we ban together to face trauma, but I actually found myself wishing these characters would call each other out more, even on non-race-related topics like Lena’s selfish boyfriend or Campbell’s self-pity. Still, the novel kept the balance between the two leads on point and showed how victories and defeats over the course of the night for one affected the other, ultimately building a unique connection between them.

To call this novel “intense” would be an understatement. Thanks to everything that’s happening to and around these characters, it’s pretty much unputdownable. Even in pockets where the girls are not necessarily threatened, there are emotions to unpack. Jones and Segal really make you care about what happens to these characters and the people they interact with other the course of the night, but ultimately, that also leads to my one major qualm with the book.

Plainly put, I’m Not Dying With You Tonight ends pretty abruptly. There’s a big dramatic moment, an end to that moment, and a few pages later, the story is done. We see the trauma as things happen to Lena, Campbell, and the people they know, but we don’t see any aftermath. An epilogue that looked at the fallout in Lena and Campbell’s lives would have been really welcomed. I suppose readers can fill in a lot of blanks through coverage of real riots in the media, but I would have liked to see a close-up look at the characters and how they were changed, if at all.

A stark contemporary that deals in hard-hitting issues and realistic drama, I’m Not Dying With You Tonight takes you on an emotional rollercoaster through the eyes of two narrators with different but equally worthy perspectives. We definitely recommend this novel to anyone who loves The Hate U Give, Dear Martin, or Long Way Down.

I’m Not Dying With You Tonight hits bookshelves on August 6, 2019. You can preorder it now via Amazon or support your local independent bookstore via Indiebound!

Lena has her killer style, her awesome boyfriend, and a plan. She knows she’s going to make it big. Campbell, on the other hand, is just trying to keep her head down and get through the year at her new school.

When both girls attend the Friday-night football game, what neither expects is for everything to descend into sudden mass chaos. Chaos born from violence and hate. Chaos that unexpectedly throws them together.

They aren’t friends. They hardly understand the other’s point of view. But none of that matters when the city is up in flames, and they only have each other to rely on if they’re going to survive the night.