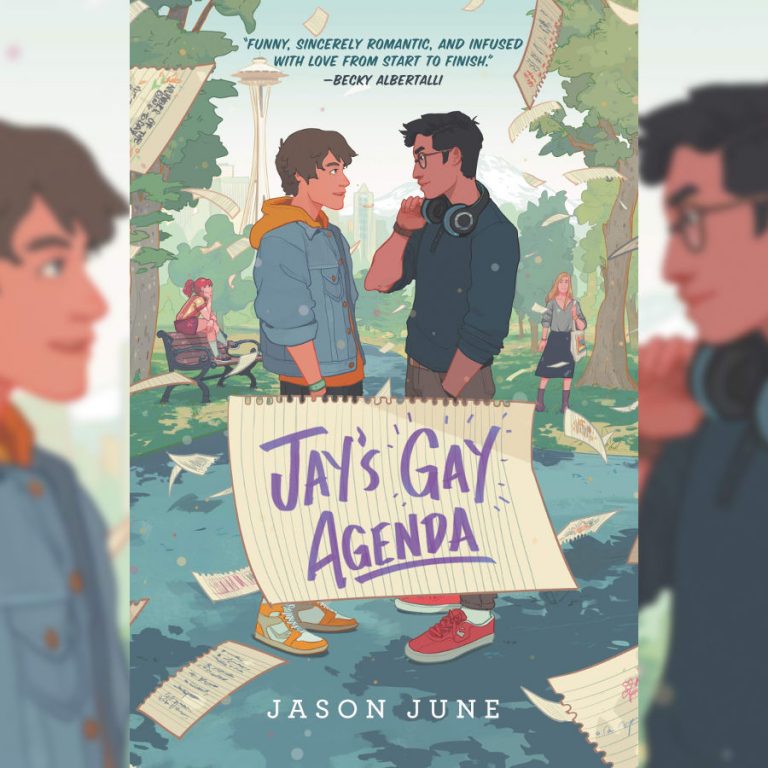 Jason June dives into a sexier world with their debut YA novel Jay’s Gay Agenda.

In Jay’s Gay Agenda, Jay finds himself going from a small town life where the gay population is solely him, to a bustling city where anything is possible. Overwhelmed, he creates an agenda, a list where he organizes what he wants to do in his life as a gay man in a new world. But what happens when things start happening that causes the list to constantly change?

Jay’s Gay Agenda was unlike any other LGBTQ+ book that I’ve read in recent years, and Jason June made sure it stood apart from all the others. It wasn’t just about falling for a guy or about coming out, it was about fully embracing being a gay man. It was a story that made the book stand out in ways I haven’t seen in other YA books. It tackled the gay community and showed the darker side of the world, where hookups and messing around with others is a real thing. And it wasn’t afraid of being sexy in a non-traditional way and show the gay sex culture in a realistic light. It wasn’t something that I expected, but it was something that I appreciated.

Jay went from a town where he was the only gay teen, to an open world where anything was possible so clearly nothing was off the table. We got a flawed character who messed up a lot and almost didn’t know what to do. And like a kid in a candy shop, Jay wanted everything he could get his hands on. It was refreshing seeing a character who tried to be a put-together person but turned out to be an unintentional ass.

Jay likes to create lists and be organized with his life, which is something that he repeats often in the book. So it was refreshing seeing a character where the only person that truly stood in his way was himself. The problems in the book could’ve been solved had people just been open, but it was so good seeing characters calling each other out instead of just being quiet and letting things go.

And it was interesting seeing him balance both his life in the new city and his world back home. I found that part to be realistic as well, living in the city myself. I’ve met all the people he met and know them all as well. From the sex crazed college roommates, to the person who’s discovering who they truly are on the inside. We met many people on the spectrum of life and I loved them all.

I also really enjoyed the supporting characters a lot and what they brought to the story. Each one had their own life and role to play as well as their own storylines that intertwined with Jay and everyone else. And like Jay, they were all flawed as well which made it even more realistic. None of the characters were these goody two shoes that most books hand out.

I truly loved the way the book tackled the gay culture as well as how the characters worked together. I think it flowed very well together and gave a great message about what it means to be yourself, and to be honest. Speaking of being honest, I honestly hope there’s a sequel. Jay became one of those characters that I wanted to take under my wing and help him find his path. But it was entertaining seeing him do it on his own. Jason June has a new fan for life and I can’t wait to see what else they write.

Jay’s Gay Agenda by Jason June will be out in bookstores and wherever books are sold on June 1, 2021. Pre-order your copy using any of the links below.

There’s one thing Jay Collier knows for sure—he’s a statistical anomaly as the only out gay kid in his small rural Washington town. While all this friends can’t stop talking about their heterosexual hookups and relationships, Jay can only dream of his own firsts, compiling a romance to-do list of all the things he hopes to one day experience—his Gay Agenda.

Then, against all odds, Jay’s family moves to Seattle and he starts his senior year at a new high school with a thriving LGBTQIA+ community. For the first time ever, Jay feels like he’s found where he truly belongs, where he can flirt with Very Sexy Boys and search for love. But as Jay begins crossing items off his list, he’ll soon be torn between his heart and his hormones, his old friends and his new ones…because after all, life and love don’t always go according to plan.

From debut novelist Jason June comes a moving and hilarious sex-positive story about the complexities of first loves, first hookups, and first heartbreaks—and how to stay true to yourself while embracing what you never saw coming.