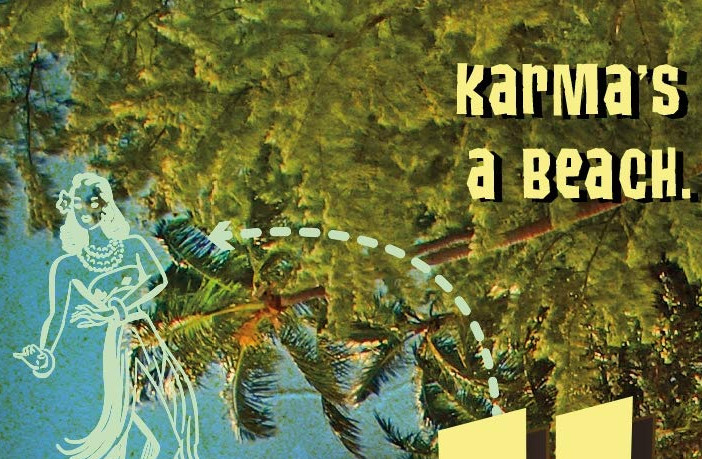 Just My Luck promises a summertime romance that will make you swoon, but it didn’t even have enough romance to make my heart flutter.

***This book was given to us by the publisher for an honest review.***

Marty, a maid to one of Maui’s most exclusive hotels, has been stealing little trinkets from the hotel patrons when she goes to clean them, and that’s why she believes her luck has been terrible. However, when she meets Will, a cute guy who has been staying at the Grand Palm Maui, she believes things may be looking up. She is soon proven wrong by numerous freak accidents and coincidences and must try to send back everything she has stolen before something irrevocable happens.

You know the expression “quality over quantity”? Well that’s not the case with the characters in this book. For a book under 250 pages, there were a plethora of characters but they all felt two dimensional. For example, Marty’s problem of running away from her problems. Yes, she finally faced her daddy issues at the end, but that felt like a product of the book almost ending rather than her learning from her mistakes. This could also be from Marty never suffering from any consequences, and I don’t believe in luck playing a part in ruining her dharma. When Marty had to tell her best friend that she couldn’t on their trip to Los Angeles that they’ve been planning forever and is going to happen very soon, her friend, Nalani, had no reaction. Now I don’t know if you’ve ever planned out a trip with someone before but everything ranging from hotels to activities to travel method has to change. I think Nalani should at least be somewhat disappointed in Marty not telling her sooner rather than giving Marty a hug. So here again we see Marty not learning from her actions and she gets a positive reinforcement instead. Another thing that rubbed me the wrong way was a specific scene in the book where Marty had to dress professionally for an outing and the only thing that fit her manager’s request is a short and tight dress, so her manager gave her a cardigan to cover up. Then, Marty’s internal monologue gives off a vibe that she’s ungrateful and can’t understand why her manager is doing this. Sis, if that’s the only dress you have-fine I’m not going to throw a hissy fit about it, but understand this is a PROFESSIONAL outing and you can’t have a clubbing dress on to represent your hotel! I don’t agree with your manager just handing her cardigan to you, in fact, I think that’s uncomfortable with the tense relationship between the two. Rather, the manager should have suggested Marty get something from the swanky hotel shop that Marty chose and suits her taste.

Will, the “love interest” doesn’t annoy me as much as Marty but that’s not any better. Unsurprisingly, he has the body of a Greek statue, he’s rich, and he has a mysterious backstory. I’m so tired of this trope I don’t even want to elaborate anymore.

The other characters, let’s go down the list: Leo/Benjie, works with Marty, I thought they were the same person until I wrote this because they practically are. Nalani, Marty’s friend, teen drama angle to the story. Kahale, Marty’s ex, serves as a part of why Marty can’t trust people easily. “Mom”, Marty’s mom, does mom-ly stuff and demonstrates the family life. Hayes, Will’s brother, basically a lawn sprinkler that spits out Will’s backstory. I could go on but they all merge together to form a blob of plot device.

The pacing was fine, I appreciated that something was always happening, but the plot… The plot has so much potential and I’m bummed that Just My Luck was not as good as I expected. It felt like the romance was unnecessary for a story arc in which Marty is trying to overcome her run-away tendencies, but then it’s like her story arc doesn’t mesh with the romantic side. I can’t even tell why Will likes Marty or why they wanted to be together. However, I liked the ending and the realistic element it brought to this vacation love-story. I think what would have been even more interesting is if Marty finally realized there is no bad luck following her around but rather life is not perfect. Instead of becoming discouraged, she would try to do the right thing even if life tries to put her down.

If you’re looking for a short book to chill with by the hotel pool or on the airplane, this would be perfect to get you into a holiday-romance mood.

Just My Luck by Jennifer Honeybourn is out on July 16th, 2019. Order your copy at any of the following:

Marty has terrible luck and she knows exactly why. While working as a housekeeper at the ritzy Grand Palms hotel in Maui, Marty made it a habit to steal small items from the guests. What better way to stick it to the rich snobs they have to clean up after? Marty knows how to turn her luck around — she just has to return all of the items she stole.

When Marty meets Will, a new guest who is staying for the summer, she does the one thing she always promised herself she’d never do — fall for an out-of-towner. But Will’s special, different from the other guests at the hotel. Maybe Marty’s luck is finally turning around.

After a string of misunderstandings and accidents threaten Will and Marty’s relationship, Marty has to find a way to fix her luck for good — or say goodbye to Will forever.