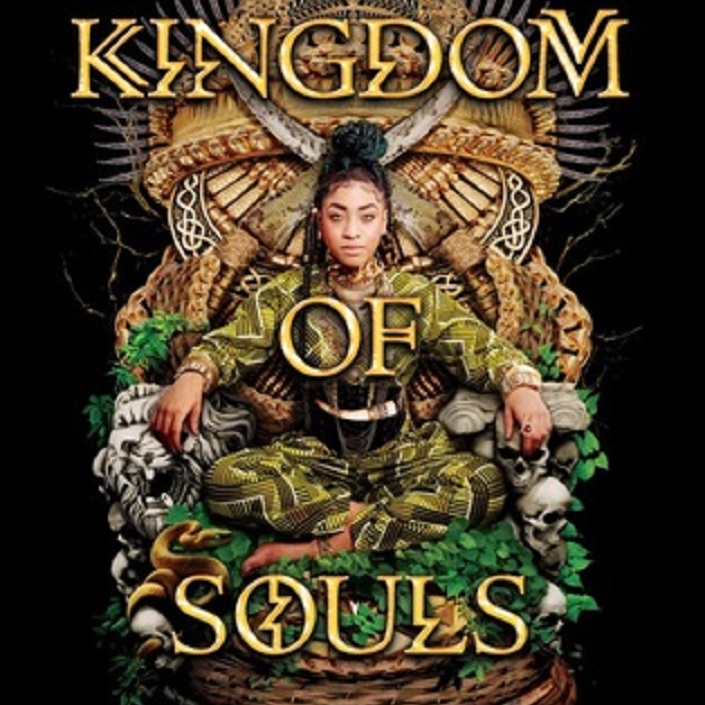 Rena Barron weaves a compelling fantasy world together for the start of a new series in KINGDOM OF SOULS!

Arrah is the daughter of two extremely powerful witchdoctors– her father beholden to the tribal traditions while the other serves as the mighty Ka-Priestess in the city where Arrah grew up. Despite her heritage, Arrah doesn’t have a drop of magic of her own. But the world is rapidly changing and an ancient evil is returning to her world. Desperate to find answers and fight against a nearly unbeatable force, Arrah begins the potentially deadly process of trading away years of her life for short bursts of magical ability. Will it be enough to stop the rise of The Demon King?

Kingdom of Souls is a West African-inspired fantasy with decadent worldbuilding that drips into every facet of the storytelling. The mechanics of magic and the world are fascinating and important to Arrah’s journey. As expected, that comes with quite a lot of set-up. Sometimes it makes things feel a bit slow, but Barron usually does a good job breaking up the setup with forward-motion plot points. I wouldn’t say there’s much in terms of pure action for most of the novel, but there’s definitely momentum in the storytelling, especially after you start to realize what’s really going on in Arrah’s universe.

Much to my delight, this book is a deliciously dark edge to it that I wasn’t expecting. Yes, sacrificing years of life for magic is a little dark, but there’s so much more beyond that. I can’t get into it too much without breaching into spoiler territory, but if you like to get a few chills from a book, they’re here.

One thing I do wish we saw more of in the novel were the secondary characters, including Arrah’s friends and love interests. They’re included in all but one section of the story, but it’s often in short spurts and you don’t really feel the strength of their connection. Arrah’s love interest, Rudjek, is described as a childhood friend turned romantic interest (a favorite of mine,) but you don’t really see much of their chemistry in play. The story tells us about their unshakable bond without really showing it. However, Barron did a great job exploring Arrah’s varied and complex family relationships, which really root into the story.

Part of my lower review rating is due to one scene that made me pretty uncomfortable. I’m going to dive into some spoilers in this paragraph, so please skip it if you don’t want to know. Essentially, there is a scene in which a character is tricked into believing that they’re having consensual sex with someone other than the person they’re actually with. No matter what magic is involved, this is rape. And how does our protagonist handle it? She gets mad at the person who was raped and angrily insists that they should have known better– not once, but repeatedly throughout a long swath of the novel. With all the other dark, moody stuff going on in this book, the rape itself didn’t feel wholly necessary (nor did it prove anything about the aggressor or the victim,) but the victim-blaming is what’s really prodding at me. The author also doesn’t seem to recognize it, because she listed several trigger warnings for the novel on Goodreads, but doesn’t include this. Why bother with this scene?

That plot point throws a huge wrench into my overall enjoyment of the novel, but I really enjoyed the spooky, slow-burn feel. Plus, with a plot driven by twists and an explosive ending, I want to see where Arrah’s story goes.

Kingdom of Souls is available now. You can snag it via Amazon or support your local independent bookstore via Indiebound.

Magic has a price—if you’re willing to pay.

Born into a family of powerful witchdoctors, Arrah yearns for magic of her own. But each year she fails to call forth her ancestral powers, while her ambitious mother watches with growing disapproval.

There’s only one thing Arrah hasn’t tried, a deadly last resort: trading years of her own life for scraps of magic. Until the Kingdom’s children begin to disappear, and Arrah is desperate to find the culprit.

She uncovers something worse. The long-imprisoned Demon King is stirring. And if he rises, his hunger for souls will bring the world to its knees… unless Arrah pays the price for the magic to stop him.