Book Review: LAST OF HER NAME by Jessica Khoury 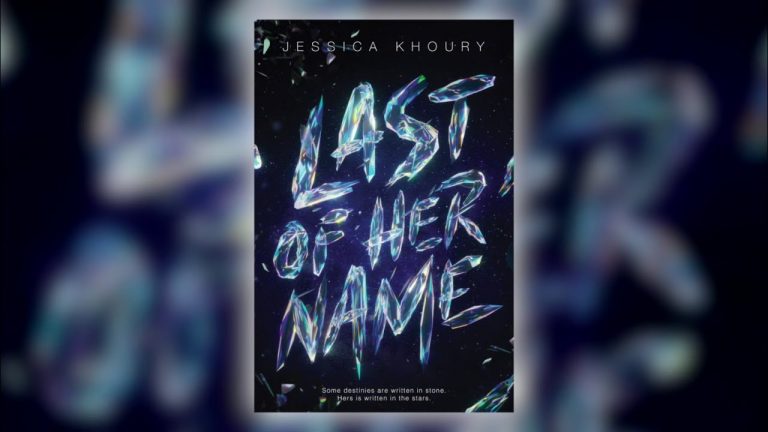 The legend of Anatastia gets an intense sci-fi twist in LAST OF HER NAME!

Stacia has everything she’s ever wanted on her home planet of Amethyne– incredible parents, two best friends, a family business, and a knack for mechanics. But all of that goes haywire on the day the Direktor Eminent Alexei Volkov and his Union ships touch down on their sleepy planet, searching for the impossible. Volkov believes lost Princess Anya Leonova is still alive and hiding on Amethyne, and he’s prepared to tear apart the planet to find her.

Barely escaping with her life and one of her best friends, Pol, Stacia knows that in order to save her loved ones on her home planet, she’ll have to blaze through the galaxy known as the Belt of Jewels to find out the true history of the Leonova family and bring down the Direktor Eminent. Still, she has far more enemies who want to use her for their own purposes than allies. Who can she really trust?

As you probably can tell by the description and character names, Jessica Khoury’s novel is based on the Anastasia myth, though not too heavily. Aside from the lost princess discovery and a few very vaguely Russian tips of the hat, Khoury has built a world that exists independently from the original, replacing it with a swirling, complex galaxy with carefully mapped planets and original elements. As Stacia travels through it, you realize just how much depth has been incorporated and you can’t help marvel at it all.

Stacia is a worthy and interesting main character, flawed but loyal, determined but unsure. She’s not unrealistically hyper-efficient, but she has skills and traits that make you root for her. Stacia picks up more friends along the way, including an outcast with incredible powers named Riyan and a reluctant rebel. The secondary characters all have their own personalities and charms, but none quite as much as her original companion Apollo aka Pol, whose unique standing in Stacia’s life makes their relationship so intriguing and a bit emotional.

Last of Her Name leaps right into action, introducing you to the characters and the world, as the characters are in the thick of it. Unfortunately, there’s a lull in the middle where we spend a lot of time simmering in a secondary character’s territory and backstory and on the whole, it didn’t do much for the plot. The pacing was so amped up right until that point and stopping to take in a load of information and setup felt like a strange sensory overload. Things do pick back up, but it takes a while to fully recover. Khoury makes up for the slowdown with a killer twist in the second half, but I won’t say too much about other than I eat “twists” for breakfast and this one totally snuck up on me.

When the book reached its ending, I was definitely satisfied. Still, while there’s emotion to explore at the end, it’s not necessarily excitement and I do wish that with all that action, we managed to squeeze a few more thrills in there. It’s a royal legend-inspired romp through space, though, and there’s plenty of allure and adventure even with its bumps!

Last of Her Name by Jessica Khoury is out now. You can order it now via Amazon or support your local bookstore via Indiebound!

Sixteen years ago, rebellion swept the galaxy known as the Belt of Jewels. Every member of the royal family was murdered–down to their youngest child, Princess Anya–and the Union government rose in its place. But Stacia doesn’t think much about politics. She spends her days half-wild, rambling her father’s vineyard with her closest friends, Clio and Pol.

That all changes the day a Union ship appears in town, carrying the leader of the Belt himself, the Direktor Eminent. The Direktor claims that Princess Anya is alive, and that Stacia’s sleepy village is a den of empire loyalists, intent on hiding her. When Stacia is identified as the lost princess, her provincial home explodes into a nightmare.

Pol smuggles her away to a hidden escape ship in the chaos, leaving Clio in the hands of the Union. With everything she knows threading away into stars, Stacia sets her heart on a single mission. She will find and rescue Clio, even with the whole galaxy on her trail.