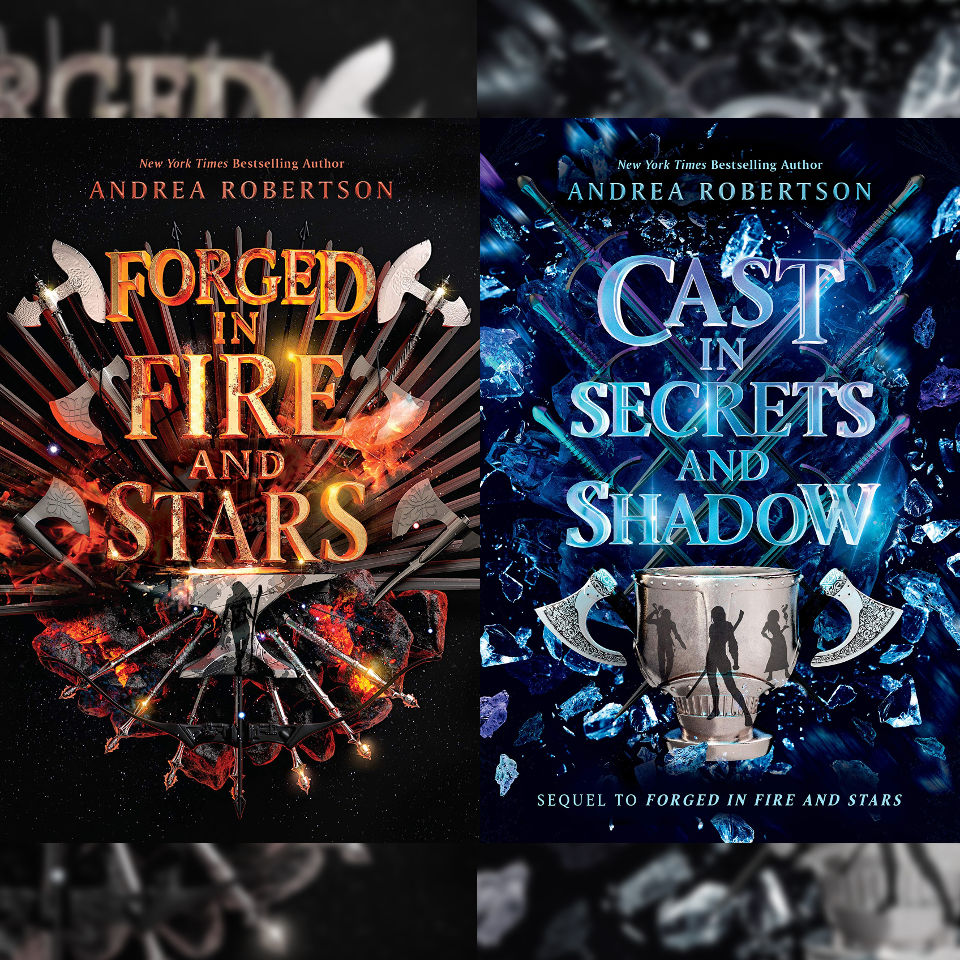 Forged in Fire and Stars and Cast in Secrets and Shadow by Andrea Robertson are the two books in the Loresmith series, and unfortunately, it was a series that I had a hard time getting through. Maybe it’s just where my mind was at during the time I was reading it, or the summer season, but I really just think it’s because I couldn’t get myself to care about the characters.

Don’t get me wrong, the writing is great and the world that Robertson created is fascinating. There’s this whole separate religion and there are countries that really showcase her imagination. The writing itself is fantastic, and the idea behind it is what made me pick up the series in the first place. The problem was the characters were just not engaging enough.

I found myself putting the book down more times than I normally do when reading. When I’m engaged in a book it takes me less than a day to read the whole thing… and sometimes the second book as well. But this series took a whole month to finish, which was not a good sign.

Let’s start with the good stuff. What stood out to me the most was the world that this adventure was set in. It’s from the same vein as our reality, with the somewhat common twist where empires and magic exist. However, this series stands out in that magic is especially present in metalworking by a loresmith. I’ve actually forged a knife before, and so I know how difficult and HOT the process can be (but it’s pretty cool). It’s certainly unique, and the gods that Roberston created are reminiscent to Greek gods (but a little different), which makes the whole religion aspect of the writing fascinating.

The first book I persevered through, but I probably wouldn’t have read the second if it wasn’t to write this review… in all honesty. There were definitely some twists thrown in there that surprised me, so if you’re into unexpected happenings this could be an interesting book.

What bothered me was that the characters just didn’t feel relatable, nor did the romance. And though the writing was fine, the way the drama and the romance and intrigue was brought about, just was quite predictable and maybe a bit on the tacky side. Even so, there were moments when the romance got a little intense in the second book, so if you’re into the forced shared bed trope, the almost having sex trope, the swimming naked trope, you might at least like that. However, again, Robertson’s wordplay on those scenes are probably not her strongest aspects of her writing. Those moments, which seems typical of your standard YA novel, just didn’t seem to blend well enough with the rest of the story, at least in the way it way presented.

Even if the story is about teens trying to save their world, there’s always room for romance, but for some reason, it just didn’t feel quite right in this series. In this instance, it would’ve been better if it the relationship between the characters had remained as a friendship, a very close friendship with a hint of something more, but a friendship nonetheless.

By no means was the writing itself bad in any way, other than it was too descriptive for my taste. I wouldn’t tell readers NOT to read the Forged in Fire and Stars series, but I wouldn’t go out of my way to recommend it.

You can order a copy of the books at the following:

About Forged in Fire and Stars

Ara has always known the legend of the Loresmith: the blacksmith who served alongside the kings and queens of Saetlund, forging legendary weapons to arm warriors and protect the kingdom. She’s been told it’s her fate to inherit the title and become the next Loresmith. But since the monarchy’s downfall in a vicious conquest years before, Ara has never truly believed she would be able to take up her duty.

But when the lost Princess Nimhea and Prince Eamon steal Ara from her quiet life with a mission to retake the throne and return Ara to her place as the Loresmith–Ara’s whole world turns upside down.

Suddenly, Ara must leave her small mountain village and embark on a dangerous adventure where she will uncover new truths about her family’s legacy, and even face the gods themselves. With a mysterious thief as an unexpected companion, and dark forces following their every move, Ara must use all her skills to forge the right path forward–for herself, her kingdom, and her heart.

About Cast in Secrets and Shadow

Ara has taken up her mantle as the Loresmith–but her journey is far from over. After suffering betrayals and losses, Ara, Nimhea, Lahvja, and Teth must try to come together and find the Loreknights across the kingdom. The Loreknights are their only hope in overthrowing the evil Vokkans and putting Nimhea on the throne for good. But their journey will put Ara and her companions in grave danger–from the endless pursuit of the Vokkans to perilous encounters with the gods, and the near impossible trials they face along the way–will they be able to survive long enough to help the rebellion?

And through it all the Vokkans are expanding their reach throughout Saetlund, putting everyone Ara and her friends love at risk. Only Ara can forge a way forward, take up her powers, and fight to change the world–no matter what it costs.

From internationally bestselling author Andrea Roberston comes the second book in a gorgeously written new fantasy series perfect for readers of Leigh Bardugo’s Shadow and Bone or Sabaa Tahir’s An Ember in the Ashes series.