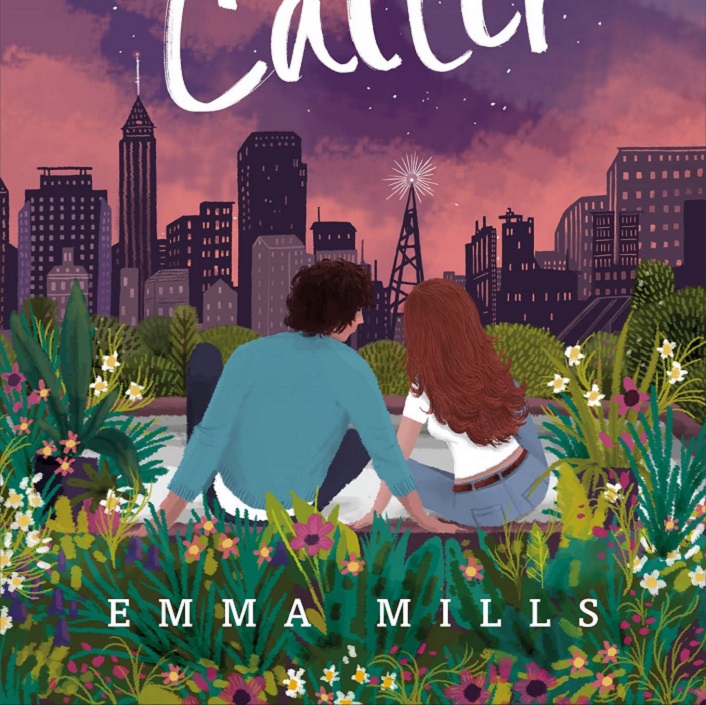 Nina isn’t expecting much trouble from her new radio broadcasting class. All she has to do is flip some buttons and play some music, right? Well, things get a little more complex with her ex-childhood best friend joins her team and another boy in the group becomes entangled in a bet to get the most listeners. To avoid complete and utter failure, Nina sets up a mystery guest to visit the show… and during the few weeks leading up to the interview, two fandoms convince themselves that they know who’s attending and it’s going to be huge. The problem is neither of their guesses are right and the whole community is whipping into a frenzy over nothing. Can this new “radio team” make it work?

Let me start by saying that expectations were pretty high for this book: I’ve never read an Emma Mills novel before, but my friends gush as if they’re the top tier cutest of the cute. And maybe the others are! I’m not willing to write off the author by any means. I was just expecting these pages to be bursting with a perfect mix of awkward and adorable, and ultimately it fell a little shy for me.

Nina’s life really centers around her mother, her sisters, and her soon-to-be stepfather Dan (aka dentist and super pure YouTuber who goes by Mr. Paint.) I found her relationships with them to be the most endearing part of the novel as they learn to navigate a changing family dynamic and the girls’ strained relationship with their radio DJ dad who lives thousands of miles away. There’s lots of sweet, quiet moments in the narrative to be enjoyed here, and this might count as the core of the story more than the romance.

Jaime is the childhood friend that Nina fell out of touch with after an embarrassing incident. Both characters are painfully shy with good hearts, so they just fit together well. However, their dispositions mean that you don’t see a lot of flirting. There’s some charm, but I wanted more. Their romance is very tame and safe for all ages, but I wish we saw more sparks fly as they re-discovered their feelings for each other and started something new in the midst of chaos, even if it’s simply done through conversations.

The rest of the radio team consists of Sasha and Joydeep. Sasha is a budding new friend to Nina who comes off as a bit of an everygirl and could have used a little more fleshing out, to be completely honest. Joydeep is probably my favorite character! He’s a bit obnoxious and definitely a prankster, but he struggles to bring that energy to their radio show as its host. He isn’t perfect, but he has the most personality of all the characters, by far!

For all its charm, Lucky Caller moves very slowly. The plot is dependent on the end event and there isn’t a whole lot of anything leading up to it besides radio goofs and people talking. Mills covers some gaps with important backstory on Nina’s family, her relationship with Jaime, and a quick glance back into Nina’s parents first connecting via a radio show that never quite met its full potential, but the retrospective on the past only partially shaped the present. The whole novel felt very low stakes, even for a fluffy HEA. It doesn’t need to be action-packed and devastating, but something needs to be at stake. The description teases a fandom war that doesn’t really even happen, which is probably not helping.

However, I did enjoy the goofy but pleasing ending when it came about. There’s tons of little moments of joy encompassed within, especially when a certain celebrity mystery comes into play at the last second. Still, it didn’t quite make up for the lack of story excitement leading up to the big moment.

Lucky Caller is a sweet contemporary, but it was a little too simple for my tastes. Longtime Emma Mills fans will probably have more perspective on this one than myself and if you love her books, don’t let this review stop you! Just because it didn’t always work for me doesn’t mean that will be the case for everyone.

Lucky Caller hits shelves on January 14th. You can preorder it now via Amazon, via B&N, or by supporting your local independent bookstore via Indiebound!

With the warmth, wit, intimate friendships, and heart-melting romance she brings to all her books, Emma Mills crafts a story about believing in yourself, owning your mistakes, and trusting in human connection in Lucky Caller.

When Nina decides to take a radio broadcasting class her senior year, she expects it to be a walk in the park. Instead, it’s a complete disaster.

The members of Nina’s haphazardly formed radio team have approximately nothing in common. And to maximize the awkwardness her group includes Jamie, a childhood friend she’d hoped to basically avoid for the rest of her life.

The show is a mess, internet rumors threaten to bring the wrath of two fandoms down on their heads, and to top it all off Nina’s family is on the brink of some major upheaval.

Everything feels like it’s spiraling out of control―but maybe control is overrated?