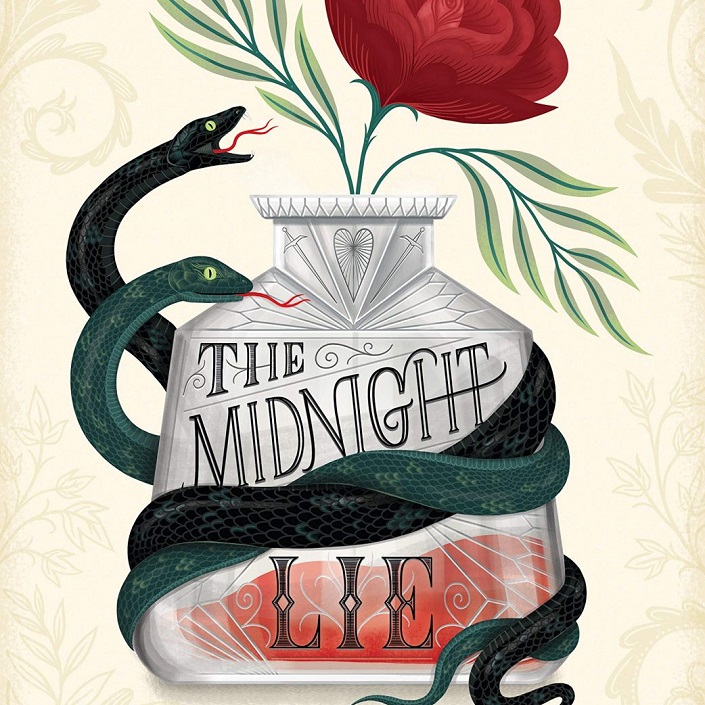 There’s a lot of chaos happening in the world right now, but there’s still one big reason to sit back and rejoice: There are still a lot of great books coming out, including Marie Rutkoski’s fascinating new LGBTQ fantasy, The Midnight Lie!

Nirrim is Half-Kith, the lowest ranking member of her society that lives separated in a community known as The Ward. The Half-Kith live under the burden of extreme restriction while all of their work supports the elite known as the High Kith. Nirrim has never dreamed of life outside The Ward and uses her few connections to try to better the lives of others, at great personal risk. But everything changes when Nirrim meets Sid, a sly and charming outlier who thinks she’s figured out the secret to the Kith system: She believes there’s magic on this isolated island nation. Sid ropes Nirrim into her quest to find magic, but their research will open up Nirrim’s world in ways she never expected.

The Midnight Lie is set in the same world as The Winner’s Curse series, but the world we knew in the previous trilogy and the world presented in this novel don’t intersect heavily. Think the original Shadow and Bone trilogy versus the Six of Crows duology– The other parts of the universe are acknowledged, but they’re not the focus. There is one character that’s an easily spotted tie-in to the original series, but it doesn’t affect the plot at all. All that said, you can absolutely read The Midnight Lie even if you’ve never read a single sentence in The Winner’s Curse trilogy.

Nirrim is the sole narrator. Sid is the more entertaining character, but it’s easy to see why this story has to center around Nirrim’s journey. However, it’s important to note that her story includes some hard-to-read moments, including physical and emotional abuse at the hands of people she not only trusts but defers to often. It may be tough for certain people to read, especially if they’ve had similar experiences with authority figures in their lives.

Nirrim and Sid are more than just friends on an adventure: The Midnight Lie is a LGBTQ tale that really takes the time to dive into the relationship between the two leads. Sid is out and proud from the moment we meet her, but Nirrim’s place in society hasn’t really allowed her to consider the ways she feels different. Things between them don’t always move smoothly, especially since Sid is shown to be unpredictable and perhaps not inherently trustworthy. However, the chemistry between the two is fun and palpable from the get-go and holds its spark throughout the novel.

As we go through the story, more and more worldbuilding is introduced through the characters’ experiences and Nirrim’s memories. Marie Rutkoski is a world-class scene setter, making sure that there always a delicious new element for reads to ogle. It’s an absolute delight.

While the characters are great and the worldbuilding is top notch, there’s a downside to this novel: There’s not a lot that actually happens. I feel like one can run through the plot whole pretty summarily and it didn’t involve much action or excitement until the very end. There’s nothing wrong with character-driven stories, but it wasn’t what I was expecting. The ending is a stunning, captivating reveal that definitely makes me want to read the next book, but it almost like this could have been told in full as a lengthier standalone. All the same, Marie Rutkoski is an excellent author and I think everyone should check this one out!

The Midnight Lie is out now. You can snag a copy via Amazon, B&N, or Indiebound!

Where Nirrim lives, crime abounds, a harsh tribunal rules, and society’s pleasures are reserved for the High Kith. Life in the Ward is grim and punishing. People of her low status are forbidden from sampling sweets or wearing colors. You either follow the rules, or pay a tithe and suffer the consequences.

Nirrim keeps her head down and a dangerous secret close to her chest.

But then she encounters Sid, a rakish traveler from far away who whispers rumors that the High Caste possesses magic. Sid tempts Nirrim to seek that magic for herself. But to do that, Nirrim must surrender her old life. She must place her trust in this sly stranger who asks, above all, not to be trusted.

Set in the world of the New York Times–bestselling Winner’s Trilogy, beloved author Marie Rutkoski returns with an epic LGBTQ romantic fantasy about learning to free ourselves from the lies others tell us—and the lies we tell ourselves.