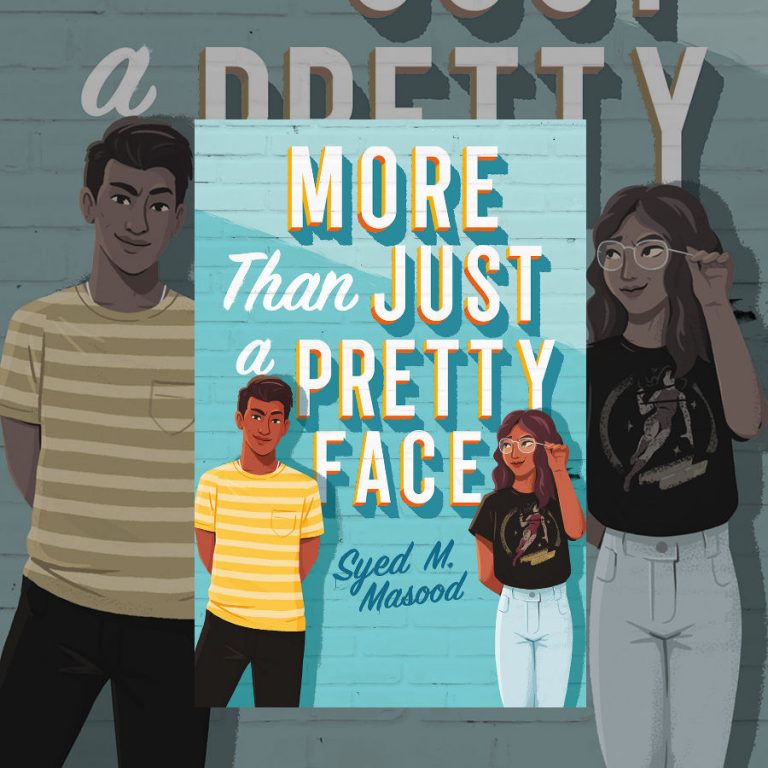 More Than Just a Pretty Face is the debut novel by Syed M. Masood. The story is told through the point of view of the young and apparently very handsome Danyal Jilani. His carefree way of thinking and his desire to become a chef may sound great for some parents who only want their children to be happy in what they do, but not so for his father. And despite his grades in school not being in the high standards that’s expected of him, he’s okay with that. He knows he’s not the smartest person in the school, but that doesn’t stop him from pursuing the things he wants, including trying to get Kaval, the prettiest girl he knows, to be his future wife. Maybe.

But as senior year goes on, things get a little more complicated for Danyal when he’s chosen to be in the school academic championship, which is an honor that is granted by a teacher of a chosen subject to only a handful of students. Danyal, however, doesn’t consider it an honor for him, but more like a joke by his teacher, to make him a laughing stock. Only when he finds a reason to take interest in participating seriously in the championship does he really start to open his eyes to what this could mean for his future and who he really wants in that future.

One thing to understand right off the bat is that though Danyal and his family are Muslims, this is not a book about being a Muslim. This is definitely more contemporary romance than anything else, with familial relationships mixed in with a good amount of humor. Having said that, this family, including Danyal’s friends’ families, is one with a lot of expectations of their offspring, and cultural traditions that may not be commonplace or familiar for some readers, including myself.

This shouldn’t stop you from reading More Than Just a Pretty Face. This is definitely one of the books that hits high on my list for best books of 2020. Generally speaking, there’s a lot of humor involved as we read on in Danyal’s thoughts. He’s not the smartest character you’ll learn about, but he is definitely full of charm and confidence and hilarity. There was one point in the book where I found myself trying not to burst out laughing since I was on break at work at the time, but honestly, it wouldn’t have been terrible to be laughing out loud at all that was happening with Danyal.

At the same time, there are some candid moments in the book that bring about some heavy topics regarding family expectations and traditions in relation to religion or culture. The author brings these topics up in very realistic ways. We get to see it in Danyal, when his dreams are not quite as high reaching as those of his parents, particularly his father, who has deemed him pretty much as a failure due to his career choice of wanting to be a chef instead of a doctor or engineer. And we get to see it also in Bisma, the college girl whom he meets as a potential match, with a secret that could ruin her life forever, along with anyone who associates with her.

At the surface, there are certain things that, as a reader, we start assessing about the characters involved, and it’s usually how they interact with the main protagonist. Some of the characters we’ll probably already judge based on what they say or their interaction with others. One of the jobs for the author is to get us to see below the surface and understand the characters more, even if we might not agree with what they believe or how they live their life. That holds strongly in this book.

There are few characters that are not easy to like, or at least agree with, but what I liked about that is there are times when we should learn to understand them, any maybe even appreciate them for who they are and what they bring to the table. That’s what’s good about this book, is the realism that Danyal’s story has for his Indian family and how certain topics can still be indirectly relatable to other people and their families.

There’s a strong sense of dedication to family and friends even if they don’t always agree, and I find that refreshing in these modern times, when so many families are broken up. The same can be said for Danyal’s relationship with his two best friends, who throughout the book are having their own moment of dysfunctionality.

Overall, I enjoyed the characters and their differences, I enjoyed Danyal’s imperfections, which plays into likeable humanity and decency, despite him not being very “school-smart.” I enjoyed Bisma’s vulnerability and kindness and her strength to move forward. I enjoyed hearing about Danyal’s Indian food, which makes me want to go in search of a good local Indian restaurant. I could continue, but basically it was just an enjoyable book that I was rather pleased at bringing myself to read, which I suggest you do as well.

More Than Just a Pretty Face comes out in stores August 4th, and you can pre-order your copy using any of the links below:

For fans of Becky Albertalli and Jenny Han, a sweetly funny YA rom-com debut about falling in love, familial expectations, and being a Renaissance Man.

Danyal Jilani doesn’t lack confidence. He may not be the smartest guy in the room, but he’s funny, gorgeous, and going to make a great chef one day. His father doesn’t approve of his career choice, but that hardly matters. What does matter is the opinion of Danyal’s longtime crush, the perfect-in-all-ways Kaval, and her family, who consider him a less than ideal arranged marriage prospect.

When Danyal gets selected for Renaissance Man–a school-wide academic championship–it’s the perfect opportunity to show everyone he’s smarter than they think. He recruits the brilliant, totally-uninterested-in-him Bisma to help with the competition, but the more time Danyal spends with her…the more he learns from her…the more he cooks for her…the more he realizes that happiness may be staring him right in his pretty face.