Book Review: THE MUSIC OF WHAT HAPPENS by Bill Konigsberg 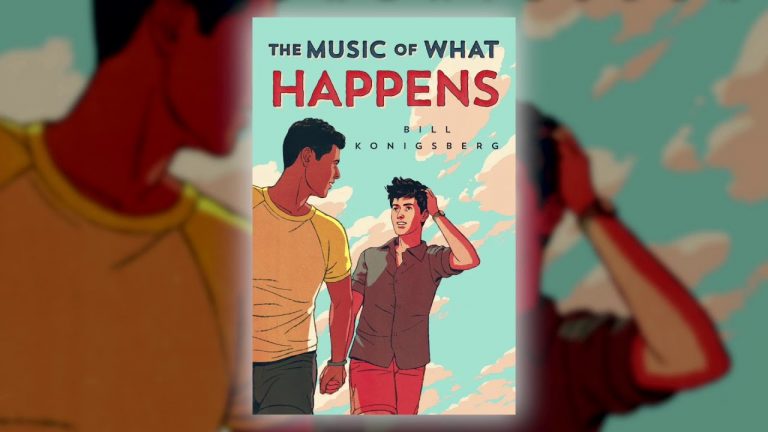 Bill Konigsberg’s latest had heaps of potential, but it just turned out to be a huge disappointment in all fronts and a book I, quite frankly, don’t want to think about ever again.

The Music of What Happens follows Max, a gay biracial Mexican baseball player, and Jordan, a gay poet. They meet in the most unlikely of circumstances: Max is wandering around a local farmer’s market when he stumbles upon Coq Au Vinny, a food truck run by Jordan and his mom. As he witnesses, Jordan’s mom has a breakdown in public as he waits for his order, he somehow ends up with a summer job at the truck. It’s now up to him and Jordan to help pay for his house’s mortgage and keep Coq Au Vinny’s legacy alive. What they don’t expect, though, is to fall in love.

It actually pains me that I didn’t enjoy this. It’s not like I had the highest of expectations ever, but every single early review I’d seen so far was praising this novel for how funny, heartwarming, and important this novel was. The synopsis even promised some “undeniable chemistry”, but I just didn’t get any of those things.

I could only point out two positive aspects in this book, which avoided me from dropping my rating even further:

The food truck was singlehandedly the best part of the entire story! It was so much fun to see these two boys battling against all odds to figure out how to run this business. The food was absolutely delectable and I wanted to eat all of it (I’m still daydreaming about those cloud eggs and marinated chicken breasts)! Plus, seeing them get so excited about all of the income they were getting and then spending all that cash on buying ingredients for the next day; it was amazing.

I think I loved it mainly because I’m in a marketing course in school, so my heart was beating super fast from joy. All the shenanigans they pulled, including scamming their customers the first couple of days with “organic and all-natural” ingredients was actually pretty hilarious. I don’t know, I think I’m in love with food trucks now.

(TW: rape) The other element I really enjoyed was how the topics of sexual assault and masculinity were handled. It was tough to read about what Max was going through, but it tackled perfectly the trauma rape victims constantly face and the victim-blaming they subject themselves to. It was very nice to see him be supported by his mom and Jordan.

And the book did a really good job of talking about how, as a society, we endlessly force men to suppress their feelings because if not, they’re not as macho. Which is a really harmful stereotype and societal rule that keeps being inforced onto males in this day and age. So, I think this particular issue was very well-written.

But that’s pretty much where my praise ends. I had little to no connection to the characters, and in a way, I found them to be slightly stereotypical. Max and Jordan’s humor, and the book’s humor as a whole, constantly made me uncomfortable with remarks and jokes that were trying too hard to be snarky and quirky but simply came off as offensive and inappropiate.

The friendship dynamics were, truly, nothing special. The jokes, again, ruined everything, and they constantly put down Max and Jordan’s relationship because they couldn’t believe these two gay guys weren’t sex-crazed and wanted to eat each other alive, which is wrong, on so many levels. Unfortunately, this behavior came from both friendship circles (or triangles, since there were three friends in each) and it ruined it for me.

The romance felt lackluster, to be honest. I genuinely wanted to root for Max and Jordan but it was impossible. It felt like they were being forced together and there was zero chemistry jumping off the page. I need that spark and motivation when I read about people falling head-over-heels with each other and it was missing. Big time.

Another major problem I had, was how slow and boring it was during the first 100 or so pages. I pretty much had to force myself to get through it, which is not a feeling I want while reading. I felt no sense of commitment to this story and plot, and if I had DNFed it, I probably wouldn’t have had the energy to care to find all about the resolution.

The writing was okay. Towards the ending, it started getting philosophical, which was a change I didn’t mind; it got good. But then the book ended. Throughout, it felt like it was trying way too hard to deliver punchlines and be comedic, but it just didn’t work, ugh.

Overall, I personally would not recommend this. It felt like a fail towards queer representation, and the Latinx rep wasn’t great. At all. I’m bummed and I have a feeling I’ll forget about this one real quick.

The Music of What Happens is out on February 26th. If you want to check out the book for yourself, you can order a copy via Amazon.

Max: Chill. Sports. Video games. Gay and not a big deal, not to him, not to his mom, not to his buddies. And a secret: An encounter with an older kid that makes it hard to breathe, one that he doesn’t want to think about, ever.

Jordan: The opposite of chill. Poetry. His “wives” and the Chandler Mall. Never been kissed and searching for Mr. Right, who probably won’t like him anyway. And a secret: A spiraling out of control mother, and the knowledge that he’s the only one who can keep the family from falling apart.

Throw in a rickety, 1980s-era food truck called Coq Au Vinny. Add in prickly pears, cloud eggs, and a murky idea of what’s considered locally sourced and organic. Place it all in Mesa, Arizona, in June, where the temp regularly hits 114. And top it off with a touch of undeniable chemistry between utter opposites.

Over the course of one summer, two boys will have to face their biggest fears and decide what they’re willing to risk — to get the thing they want the most.