Book Review: ON A SCALE OF 1 TO 10 by Ceylan Scott 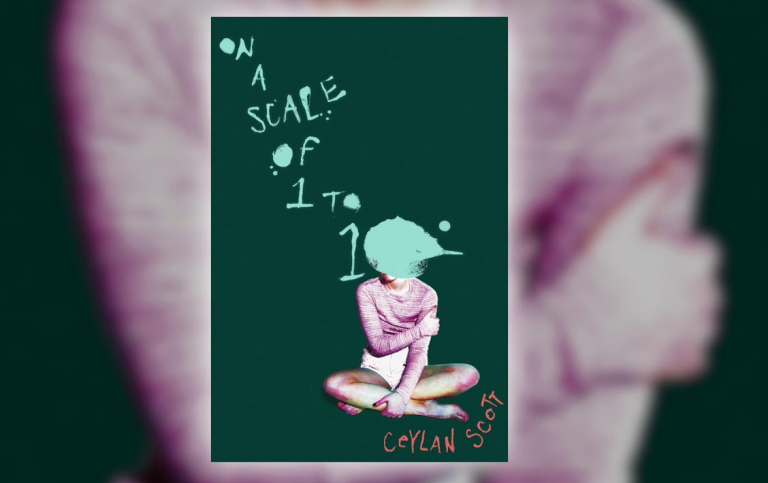 Tamar’s guilt over Iris’s fate is not easily measured ON A SCALE OF 1 TO 10.

TRIGGER WARNING: Before reading the following review, please note that On a Scale of 1 to 10 contains themes of depression, self-harm, suicide, and anorexia.

Tamar’s not sure why she isn’t dead by now. She’s convinced she deserves death because of what happened to her friend Iris when they were drinking out by the river. Now, Tamar’s in a psychiatric hospital, being fed promises of recovery. She’s not so sure there is even a remotely happy ending in her future.

Gripped by guilt, self-loathing, and self-proclaimed social awkwardness, Tamar does her best when interacting with other (teenage) patients and hospital staff, but dealing with others is often easier said than done. And when that urge starts creeping into every fiber of her being, not finding a way to act on it is nearly impossible. Maybe “getting better” is achievable, but the question that remains is, does Tamar truly want to seek the light? In her mind, does she deserve it?

On a Scale of 1 to 10 is divided into alternating chapters from “Then” and “Now.” During “Then,” the reader sees Tamar fall into depression. “Now” showcases her day-to-day struggle to avoid harming herself or acting out in the hospital. I appreciated the split in setting. I wanted answers about Tamar’s past and present–and Ceylan Scott provided both.

Scott’s writing style also impressed me. Her words were poetic. The pages are filled with impressive description after impressive description. I was particularly fond of her use of imagery. She created a visceral reaction within me multiple times, which is, in my opinion, essential to a novel with such dark, heavy themes.

My favorite piece in On a Scale of 1 to 10 is the idea that “recovery” is not a straight line–or perhaps not a line at all. There are ups, downs, and even some sideways moves. But mental illnesses are not something that simply goes away with the discharge from a facility. They are black spots on one’s brain that may never fully be scrubbed away. Yes, those spots can get cleaner, but they’re something one must face with strength one day at a time.

Sadly,On a Scale of 1 to 10 was seriously lacking in some areas. As far as I was concerned, there was no real plot. The story was merely a reflection on the characters. I need more than that in a novel. And even if I didn’t, I found every character but Tamar to be boringly two-dimensional. I couldn’t root for them; I couldn’t root against them. They left no impression on me.

On a Scale of 1 to 10 arrives on U.S. shelves on May 14th, but you can preorder a copy now on Amazon or support your local independent bookstore via Indiebound.


Tamar is admitted to Lime Grove, a psychiatric hospital for teenagers.

Lime Grove is home to a number of teenagers with a variety of problems: anorexia, bipolar disorder, behavior issues. Tamar will come to know them all very well. But there’s one question she can’t… won’t answer: What happened to her friend Iris? As Tamar’s emotional angst becomes more and more clear to her, she’ll have to figure out a path to forgiveness. A shocking, moving, and darkly funny depiction of life in a psychiatric world.

A stunning journey of one girl’s mental illness and the redemptive power of truth and healing.