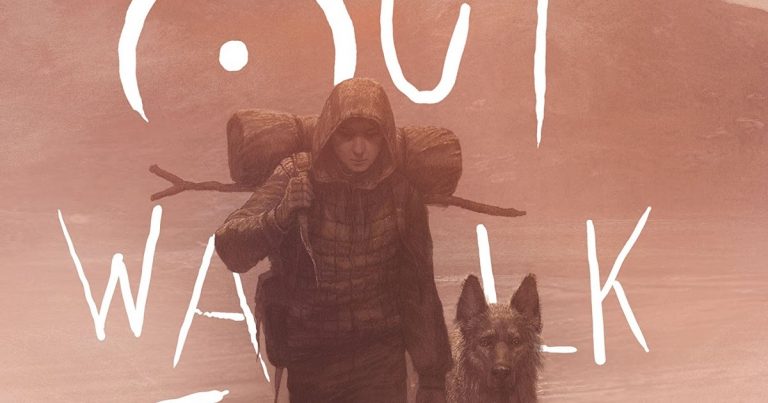 Jake is on the run, but he can’t escape the author’s writing style in OUTWALKERS.

Jake’s mum and dad are dead. But he has a Mother and Father at the Academy, a place where children without parents are sent. The Academy may be advertised similarly to a boarding school, but “prison” is a more accurate term. There’s no room for crying, let alone joy. The children will receive a proper education, and the organization will be with them from “the cradle to the grave.”

Jake has to escape. It’s been on his mind for a long time. He’s made plans, and it’s finally time to execute them. When Jake busts out, he goes to visit the Hadleys. They were once like family to him, and they promised to take care of Jet, Jake’s beloved dog, after Jake’s parents passed and he was sent away. The Hadleys never had children of their own, and they would be more than willing to take Jake in, right? To Jake’s dismay, when he makes it to their house, he’s not welcomed with open arms. And Jet is locked up in a shed. Jake’s dream begins to falter and are soon ground into the dirt when he hears the phone call Mr. Hadley makes, turning him in to the authorities.

Jake takes Jet and runs. It’s not long until they are found–but not by the Bad Guys, by the Outwalkers. A group of young adults and kids welcome Jake and his pup into their gang. Jake is expected to take care of Jet and be of use to the group, but he decides that’s a price worth paying if it means he doesn’t have to be alone. Together, maybe they can make it to freedom, to Scotland.

I never thought I’d complain that a novel uses too much detail, but I feel the need to with Outwalkers. For example, I could’ve done without a full page analyzing how Jake climbed a tree. A solid focus was definitely lacking. And there was quite a bit of repetition. Jet’s yours, Jake. Your sliced-open hand hurts, Jake. I got it. The book was 400 pages, which is extreme for the story told. Fat needed to be trimmed to make Outwalkers readable, and said process was sadly overlooked.

The worst part of Outwalkers was its structure. Sentences were long or choppy– or sometimes long and choppy. And, save me, there weren’t even quotation marks to offset the dialogue! Yes, you read that correctly. The book was already long enough, and I had to go back and re-read sentences multiple times to understand their meanings.

Outwalkers‘s wasted potential was painful. A dystopia where the government tracks your every move? Very Orwell. A group of young people facing the harsh conditions of the outdoors and an oppressive society? Very intriguing. But the organization and conventions of the novel completely masked its worth. If you’re someone who is not as picky about grammar and punctuation as I am, you may very well enjoy Outwalkers. But for me, that was a deal-breaker, and I couldn’t finish the novel.

You can grab a copy of Outwalkers now on Amazon!

Set in an England in the near future, Outwalkers follows a gang of kids and their perilous journey to make it through a country where the government is tracking everyone and their every move is analyzed and controlled. They must live on their wits, and must work together to survive and escape.