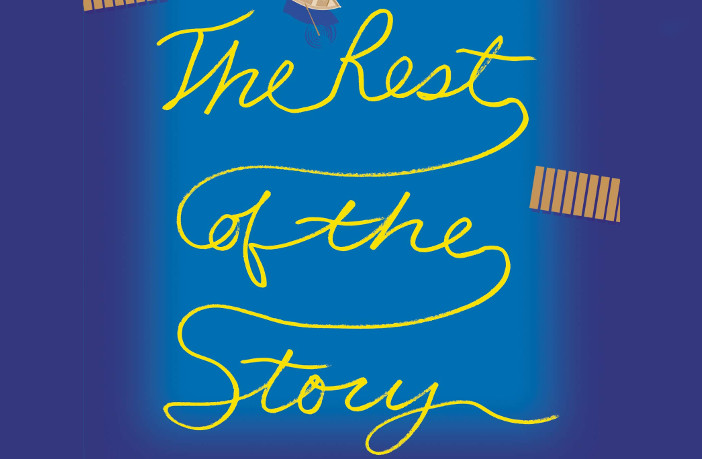 Sarah Dessen is normally known for her summer romances, but I’m glad to see her shift away from that and focus on the love of family in THE REST OF THE STORY.

When Emma Saylor Payne’s dad and new stepmom were leaving for their honeymoon, Emma’s place of lodging during that time also happened to be cancelled. To prevent ruining her father’s happy occasion, Emma volunteered to go to her mom’s side of the family, who she has not seen since she was little and doesn’t really know. There, Emma learns about her deceased mom as well as the history of her family, their lake, and of course, the classic blossoming summer love with a charming boy named Roo.

The Calvander/Blackwood family of North Lake is absolutely charming compared to the Paynes. The North Lake ensemble grew up on hard work whereas Emma has always lived quite a comfortable life, so it’s understandable that when the “rich cousin” comes to visit, the kids weren’t exactly rolling out the red carpet to welcome her. Bailey, Trinity, Jack, and Gordon have this quality of honesty that I don’t see in Emma which makes them much more outstanding in my eyes.

Emma and Roo’s romance was bearable just because Roo was an absolute MVP. He is charming, funny, smart, and kind. He is not only great boyfriend material but he’s also an amazing friend and human. If you need someone to have your back, Roo is the guy to go to. Nervous about introducing him to the parents? HAHA your parents already like him more than you. Roo also holds multiple jobs showing his maturity and hard-working character. He is the kind of guy every girl dreams about *sighs*.

There were two problems I had with the plot. One was the side story of Emma’s friend Ryan and Bridget. They don’t play into Emma’s self-growth, and in fact, there would be no change to the story without the two. The second problem was the set up of the people of Lake North (uber rich) and North Lake (not rich but not exactly dirt poor either) where I thought Dessen would show that people don’t always fall stereotype to their economic circumstance, but nope, they are exactly what their money dictates. That’s disappointing…just when Emma was getting close to leaving cardboard-cutout zone.

The Rest of the Story by Sarah Dessen will be another hit for the Dessen readers, but it still has kinks to sort through. At least the cover is gorgeous though!

The Rest of the Story by Sarah Dessen is out now. You can order your very own copy via Amazon or support your local independent bookstore via Indiebound!

Emma Saylor doesn’t remember a lot about her mother, who died when she was ten. But she does remember the stories her mom told her about the big lake that went on forever, with cold, clear water and mossy trees at the edges.

Now it’s just Emma and her dad, and life is good, if a little predictable…until Emma is unexpectedly sent to spend the summer with her mother’s family—her grandmother and cousins she hasn’t seen since she was a little girl.

When Emma arrives at North Lake, she realizes there are actually two very different communities there. Her mother grew up in working class North Lake, while her dad spent summers in the wealthier Lake North resort. The more time Emma spends there, the more it starts to feel like she is divided into two people as well. To her father, she is Emma. But to her new family, she is Saylor, the name her mother always called her.

Then there’s Roo, the boy who was her very best friend when she was little. Roo holds the key to her family’s history, and slowly, he helps her put the pieces together about her past. It’s hard not to get caught up in the magic of North Lake—and Saylor finds herself falling under Roo’s spell as well.

For Saylor, it’s like a whole new world is opening up to her. But when it’s time to go back home, which side of her will win out?