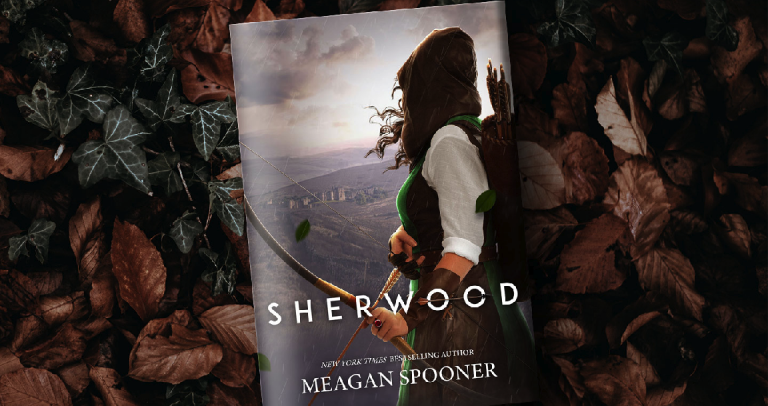 The story of Robin Hood is one that has been told time and time again, from various perspectives and with various plots. Adaptations of the classic tale rarely feel stale, if only because there is so much to work with. Meagan Spooner is the latest author to take on the tale, except there is one major twist: Robin of Locksley is dead. Sherwood, Spooner’s newest novel, tells the tale of Maid Marian, Robin’s long time love interest, as she follows in her late love’s footsteps while remaining independent and unabashedly feminist.

Sherwood follows Maid Marian as she attempts to cope with the loss of the love of her life, while stepping up to fill the void he left, as the protector of Locksley Town. Long time antagonist of the Robin Hood tale, the Sheriff of Nottingham, has been terrorizing the town, and his new companion, Guy of Gisborne, tries to woo Marian, hoping to take Robin Hood’s place.

The story quickly establishes that the Marian is not the plot-device slash love-interest of Robin Hood stories past. She loved Robin, and they planned to marry, but she remained her own woman who relished freedom and adventure. The promise of marriage to Robin was not a limitation, as is often the case with marriage in YA when a strong-willed woman is involved, but their union was an opportunity for the freedom Marian yearned for. Marian is complex and nuanced, and is almost haunted by the memory of Robin, which pushes her to adopt this heroic mantle and join the company of Merry Men. Marian is not a perfect, typical heroine, she is flawed and human and it works in her favor.

This feminist protagonist who does not apologize for who she is and refuses to conform to expectations was wonderful. Marian found herself thrust into this life of danger and responsibility and took it in stride. She lives up to the memory that Robin Hood left, and she does it without faltering. Like many modern protagonists of YA, Marian is reckless and impulsive, often not thinking about what comes after her decisions.

The development of Marian’s relationships were disappointing and rushed, especially when compared with the rest of the book. I won’t name Marian’s love interest, as to avoid spoilers, but it felt sudden and like a betrayal to the memory of Robin, who she spent most of the book remembering and almost idolizing. The romance was the only major pitfall of the story. It felt unauthentic and untrue, and it left a shadow over what otherwise would have been a wonderful story.

The world of Sherwood was nothing spectacular, but remained authentic and full fleshed out enough that I never questioned it. It was just the typical kind-of-but-not-really-medieval world that is often the backdrop to fantasy stories. The history of the world and society was rich and nuanced, giving the book an air of believability that acted as an anchor for the fantastic and wild misadventures of the protagonist.

Overall, Sherwood was fun. I really enjoyed the characters and the action and the world. The only downfall was the romance, which felt obligatory and rushed. Meagan Spooner’sSherwoodis worth the read, despite the disappointing aspects, and I would recommend it, although I would include the caveat.

Sherwood will be released on March 19, 2019. It can be found on Amazon, IndieBound, and more!

Robin of Locksley is dead.

Maid Marian doesn’t know how she’ll go on, but the people of Locksley town, persecuted by the Sheriff of Nottingham, need a protector. And the dreadful Guy of Gisborne, the Sheriff’s right hand, wishes to step into Robin’s shoes as Lord of Locksley andMarian’s fiancé.

Who is there to stop them?

Marian never meant to tread in Robin’s footsteps—never intended to stand as a beacon of hope to those awaiting his triumphant return. But with a sweep of his green cloak and the flash of her sword, Marian makes the choice to become her own hero: Robin Hood.