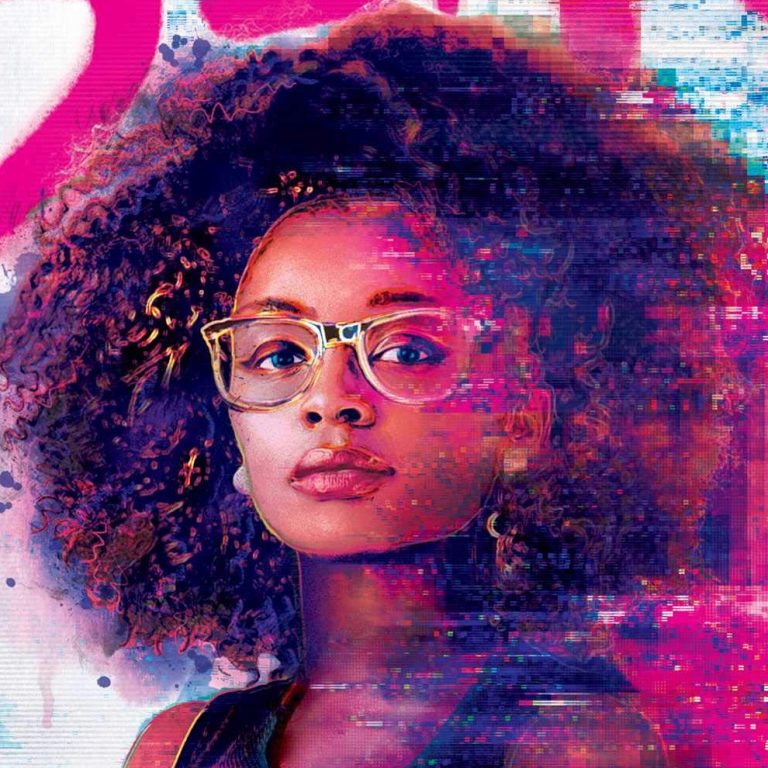 Keira is seventeen years-old and one of the few black students at Jefferson. While putting up with the ignorance and racism in real life, in the gaming world she creates a role-playing card game called SLAY that carves out a haven for black gamers to be themselves and just play. However, SLAY and her identity as game developer are in jeopardy when a well known SLAYer is murdered in real life due to a conflict relating to the game. Kiera is forced to watch her creation be dragged in mainstream media and deal with an online troll who threatens legal action against the game claiming it is anti-white and promotes exclusion.

Brittney Morris does an amazing job writing her female characters. Not only are they relatable but empowering in various ways.

Kiera, the main character, is a strong lead for such a moving story. Her strength as a youth is encouraging and as a Black woman is empowering. She’s not afraid to stand up for herself and what she believes in, which is hard enough as a person, but having age and race working against you is the hardest battle anyone can fight. It’s also the smaller parts of her personality that contribute to her strength as a main character: her constant need of keeping her shoes clean, her love of all people, and her passion for gaming.

Steph, Keira’s younger sister, and Cicada, SLAY mod and online friend, are the supportive characters we always need. They understand struggle and both are supportive pillars for Keira in their different ways. Steph doesn’t have much in common with Kiera but as they grow to understand each other they become the model sister relationship. What’s a sisterly combo without a little fighting? Steph is woke and cultured and not afraid of correcting someone’s cultural or racial insensitivity. Cicada is very interesting. The fact that she thinks she’s not black enough to SLAY shows the effect racism and discrimination have on all people of color. Where Kiera is the heart of the game, Cicada is everything else when it comes to keeping SLAY running. I would love to have read more about her and how she became a mod for SLAY.

One thing I do want to point out are the male characters in the story. I warn readers their scenes can be triggering, especially from two specific characters, Wyatt and Malcolm, who hold strong opinions on anti-white and pro-black sides.

SLAY is an eye-opener of discrimination and ignorance that comes with being a person of color. Moments and scenes that not only reflect the hardships POC’s have to go through but show the maturity and intelligence that a person develops in their life.

SLAY, an online game meant for black gamers to play without the racism that comes within the world of gaming, is a wonderful concept. That’s why SLAY, as a novel, is enlightening to read. Morris gives vivid descriptions of the characters players create, and the different lands within that my imagination runs wild with in other features of the game.

It was entertaining to read about SLAY and empowering to follow Kiera in her stand and creation of the game. I’d love to see more of how the game works and the different SLAYers as we see in some of the chapters in the book. That’s why I think the book would make a great film adaption. Fans of the book would be able to immerse themselves into the game along with the characters and drink in the innovation of SLAY.

Join the game of SLAY by Brittney Morris September 24th, 2019.

By day, seventeen-year-old Kiera Johnson is an honors student, a math tutor, and one of the only Black kids at Jefferson Academy. But at home, she joins hundreds of thousands of Black gamers who duel worldwide as Nubian personas in the secret multiplayer online role-playing card game, SLAY. No one knows Kiera is the game developer, not her friends, her family, not even her boyfriend, Malcolm, who believes video games are partially responsible for the “downfall of the Black man.”

But when a teen in Kansas City is murdered over a dispute in the SLAY world, news of the game reaches mainstream media, and SLAY is labeled a racist, exclusionist, violent hub for thugs and criminals. Even worse, an anonymous troll infiltrates the game, threatening to sue Kiera for “anti-white discrimination.”

Driven to save the only world in which she can be herself, Kiera must preserve her secret identity and harness what it means to be unapologetically Black in a world intimidated by Blackness. But can she protect her game without losing herself in the process?

Order your copy of Slay, which hits stores September 24th, through any of the links below: