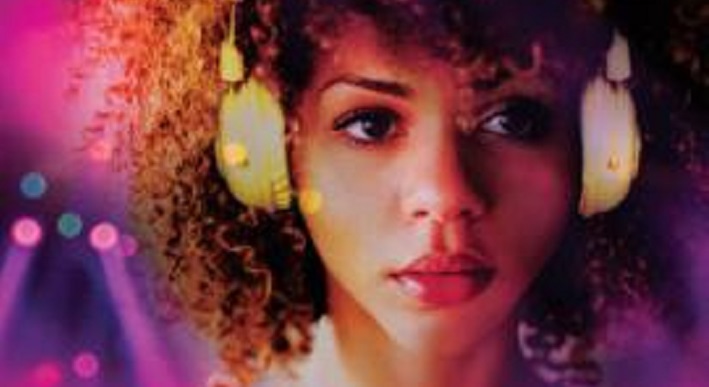 Giles’ latest release does a lot of things right, like talking about obsessive fandom, cyberbullying, the internet, and fame, but unfortunately, it lacked a sense of connection.

When Paris Secord, aka, ParSec, an up-and-coming DJ from Virgina is found dead over her turntables, her childhood best friend, Kya, and her groupie and marketing assistant, Fuse are overcome by grief. They pretty much hate each other, but they soon realize that to get justice for Paris, they’ll have to find out who’s responsible for her murder.

Both Kya and Fuse were compelling narrators whose realness jumped off the page. You could legitimately feel their grief and how much they were struggling over Paris’ death, and it was raw and painful. I didn’t particularly connect to them, or root for them even when they were in danger, but I recognize they were complex and deep characters.

There were some chapters that were told from ParSec’s own perspective, months leading up until the day she died. I wanted more of those. She was an incredibly realistic depiction of a passionate Black teen who simply wanted to succeed. Who loved music more than most things in the world. And she also represented an aching reality: the media doesn’t focus enough on the stories, cases, and disappearances that matter, and the fact that a little white girl was getting articles and reports made about her five years after her disappearance, shows how white privilege is still very much real, even after death.

I feel like there was a lot of potential for both Kya and Fuse’s family dynamics to evolve, but they just weren’t explored well enough throughout the story, though I understand why, since that wasn’t the focus. I wanted to get to know Miss Elsie, Paris’ grandma, better, and I also wanted a not-so-rushed resolution for the tension between Fuse and her dad that blossomed over time.

The plot was definitely enthralling, and I am not faulting author Lamar Giles. There were great twists and turns, and the build-up to the climax was masterfully done. I just wasn’t invested into this story; it didn’t give me that thrill I was looking for. It wasn’t boring, the problem here was that I couldn’t bring myself to care about this, which is a pity.

The writing style was good and there is no doubt that Lamar Giles is a talented author. I’m not completely erasing him off my radar; I consider this to be a typical case of “you didn’t work me now, but I’m pretty sure in the future, you will”.

Do not let this review sway you, as I’m definitely the unpopular opinion amongst readers. I highly recommend this to thriller fans, and if you wanna read about badass black girls solving a murder mystery, working through their grief and trauma, with a sprinkle of conversation of topics such as obsessive fandom, the internet, being famous when black, cyberbullying, the secrets of the music industry, then I suggest you pick this one up.

Spin by Lamar Giles is available in stores now. You can order it via Amazon or support your local indie bookstore via Indiebound.

Sixteen-year-old Paris Secord’s (aka DJ ParSec) career–and life–has come to an untimely end, and the local music scene is reeling. No one is feeling the pain more than her shunned pre-fame best friend, Kya, and Paris’s chief groupie, Fuse. But suspicion trumps grief, and since each suspects the other of Paris’s murder, they’re locked in a high-stakes game of public accusations and sabotage.

Everyone in the ParSec Nation (DJ ParSec’s local media base)–including the killer–is content to watch it play out, until Kya and Fuse discover a secret: Paris was on the verge of major deal that would’ve catapulted her to superstar status on a national level, leaving her old life (and old friends) behind. With the new info comes new motives. New suspects. And a fandom that shows its deadly side. As Kya and Fuse come closer to the twisted truth, the killer’s no longer amused. But murdering Paris was simple enough, so getting rid of her nobody-friends shouldn’t be an issue…