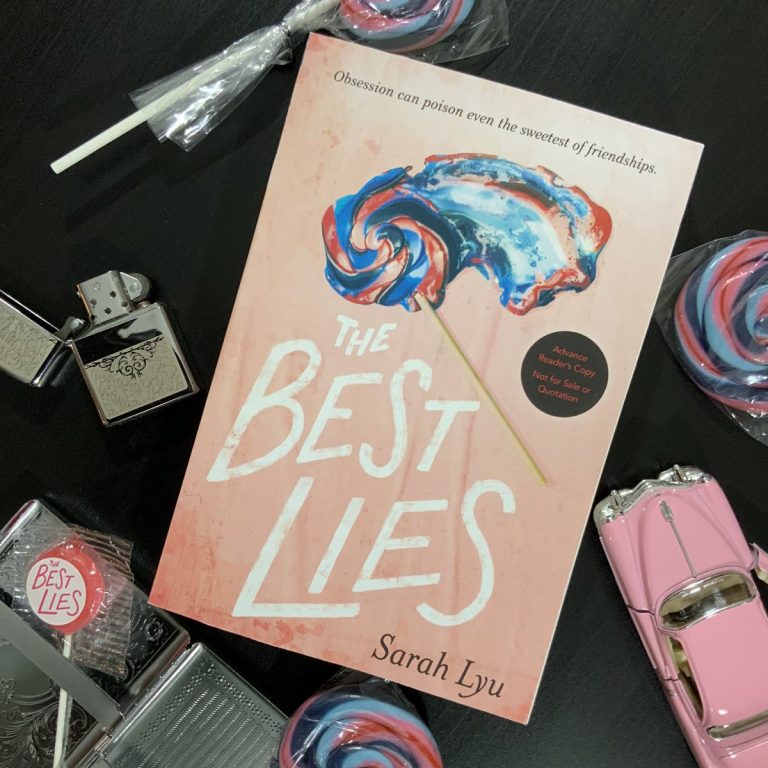 Sarah Lyu tells a gripping story of obsession, need, and rage in THE BEST LIES!

Remy Tsai never had a friend quite like Elise. When she moved into town at the beginning of sophomore year, Remy found someone with whom she could share her darkest secrets about her seemingly normal family, someone who understood her and brought out her carefree side despite the havoc of her home life. Elise is more than Remy’s best friend, she’s her “soulmate.”

But now Remy’s wonderful boyfriend Jack is dead… and it was Elise who killed him.

Remy knows Jack’s death was an accident– A deadly case of mistaken identity. As Remy is thoroughly questioned by police, she’s forced to recall the obsessive relationship she and Elise developed over the course of the last year and how to lead to the moment Jack was shot.

Because I’ve seen this book mislabeled a lot, it’s important to note that this is NOT sapphic romance of some sort. Remy and Elise have an unhealthy codependency, but they are not romantically involved. They “love” and “need” each other, but an actual attraction is never written or even really implied on the page. This is not about ride-or-die romance. It’s about sociopathic need.

When Remy first describes her friendship with Elise, it’s clear that she sees it as a unique sisterhood. It’s only in watching her memories unravel that you see the cracks slowly but surely appear. There are definite red flags that suggest the relationship isn’t healthy or safe, but Remy is vulnerable and in too deep to see it herself. It starts with a prank, then turns into a series of pranks, and then a team of misfit pranksters seeking “justice.” Elise is obsessed with the idea that she can get justice (or rather, revenge) against the people who have wronged them, and that doing so makes them stronger. Remy can eventually see the flaws in this logic, but she needs Elise, and Elise makes it very clear that she needs Remy as well.

The most powerful parts of this story are how it centers around physical and emotional turmoil, the rage that results, and the consequences of not having the proper outlets to express your emotions. This is the glue that binds Remy and Elise together. It’s a super interesting narrative on coping skills and human behavior on top of just being a WILD story. Sarah Lyu does get a little redundant while presenting these themes– I read the ARC so this may have changed, but the author repeated her major points a lot through sentences that only varied slightly, especially in the end chapters, but the messaging is still important.

Remy tells plenty of anecdotes that dive into the troubled lives and misshapen mindsets of both herself and Elise, so there are certainly moments when your heart wrenches for them. But it’s easy to see that they’re heading down a slippery slope toward utter chaos no matter what they’ve survived together. That was perhaps my biggest qualm with the book: With an overabundance of foreshadowing, the answer to the book’s ultimate question feels like it was answered very early, failing to provide a real twist. The thriller title is misleading in that sense, but if you’re looking for something deliciously dark, this is it.

With short chapters, a shifting timeline, and strong characters, The Best Lies was an insanely fast read for me. If you’re looking at add a little bit of an edge to your summer beach reads, pick this one up!

The Best Lies hits bookshelves on July 2nd. You can preorder it now via Amazon or support your local independent bookstore via Indiebound!