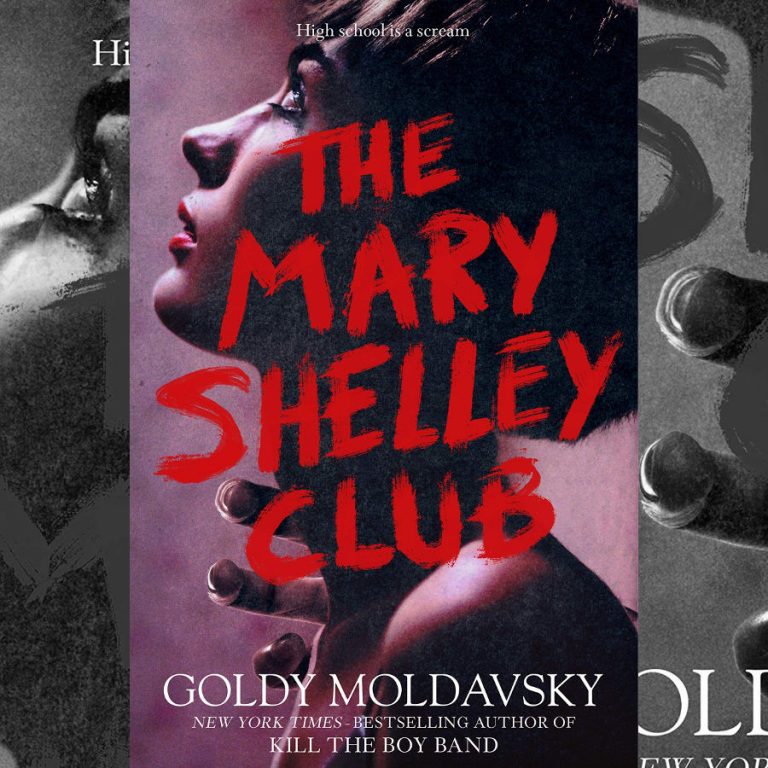 The Mary Shelley Club by Goldy Moldavsky follows the story of Rachel. It starts as the age-old story of a new girl running from her past… at a new school… with cute boys, but actually turns out to be a suspenseful tale filled with mystery, mischief, and even murder.

Rachel is a horror movie fanatic which unfortunately started due to a traumatic event that happened in her past, and because of this unique fascination, she happens to stumble upon one of the biggest secrets at her new school. Rachel may have discovered the furtive pranksters of Manchester prep, but not everyone in this clandestine club may be so happy to welcome a new member to the team. As the novel unfolds, it’s revealed that things aren’t as mundane as they originally seemed, and there is a mystery going on here that Rachel could never have believed she would have stumbled upon.

For me, the characters aren’t what makes this book standout, but they still serve their purpose well. Rachel is a fairly relatable character. She’s not extremely sarcastic, or quirky, or even funny. She’s just an ordinary girl who’s experienced some extraordinary things while fumbling through high school. She’s developed a love of horror movies, an interesting quirk that separates her from the other typical high school students with whom she goes to school.  She does discuss horror movies often, but all of these horror movies are quite popular, so even if you have limited horror movie knowledge the names will still probably ring some sort of bell, and if not, Rachel usually gives a little background into what the movie is about anyways. This isn’t extremely important to the plot, but I believe it is important to understanding Rachel’s character. She moves the plot along quite seamlessly and is enjoyable to follow throughout the book. Along with Rachel, the other cast of characters seem just as straightforward. They seem to follow the usual horror clichés. We have Rachel’s new best friend, the quirky, confident, gossip-chasing Saundra, the charming and dorky Freddie, the fun loving and class clown Thayer, the cold and impudent Felicity, and the brooding and mysterious Bram. There are bits of romance among a few of the characters, just teens stumbling through their awkward first stages of dating, but rather than it being the focus of the book, it instead helps give a little more insight to our main characters.

It is important to know that horror is a key component of the plot, and is honestly what made this book so enjoyable and compelling to me. It creates a feeling of distrust and doubt throughout the entire novel. The reader never knows who to trust or who has Rachel’s best interest. It’s the main reason I devoured the novel so quickly. It starts out as a slow burn, but once the Mary Shelly Club is revealed the pacing picks up quickly leading the reader from one clue to another, and finally ending with quite the big reveal. I’m eager to find out where it goes in the sequel, if we get one.

Now, if you are into horror this is a very gripping read, but a love of horror isn’t necessary. The mystery of The Mary Shelley Club is thrilling, puzzling, and endearing. It’s about a girl trying to find her place in a new world with no friends, and a shadowy past that haunts her into her sleep. At times I found myself spooked by the book, while I was reading in the wee hours of the night, so on occasion I did find myself putting my kindle down, so it could be fully enjoyed in the morning, but don’t let that stop you. The Mary Shelley Club is a thrilling read that I highly recommend to any reader.

The Mary Shelley Club will be released on April 13, 2021, and you can pre-order it through the links below.

Order your copy of The Mary Shelley Club, out April 13th.