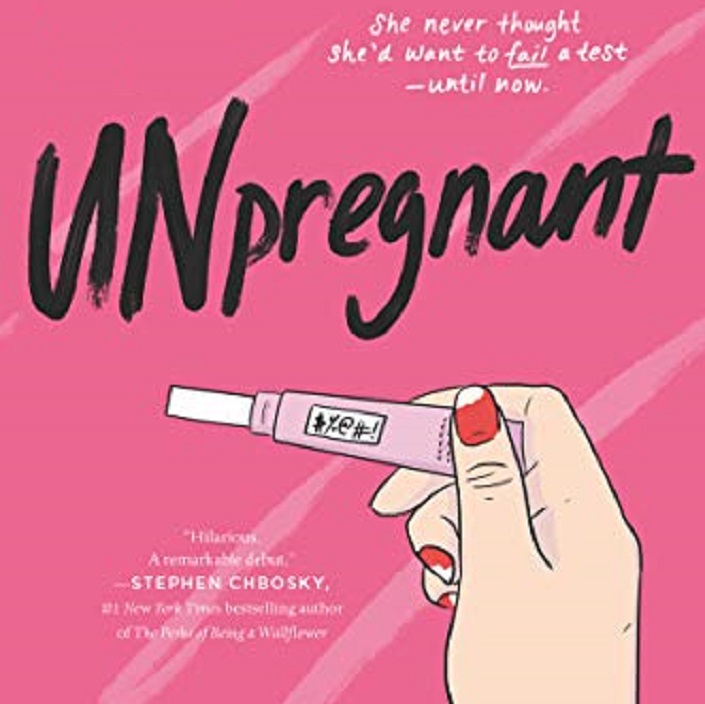 In UNPREGNANT, Veronica has her future all planned out, and having a baby at seventeen is not on the agenda.

Veronica Clarke is a model seventeen-year-old: a straight-A student, on the fast-track to being valedictorian, attending Brown University in the fall… and pregnant. Yep. Those two pink lines staring up at her threaten to ruin everything: her popularity, her relationship with her boyfriend and group of best friends, and her entire future.

But Veronica is determined to stay on the track she’s spent her entire life crafting.

Right away, she knows–deep in her bones–that having an abortion is the only viable solution. She doesn’t want to wind up like her sister, who has been having babies and been going nowhere since high school. No, her (religious) parents have bigger hopes and dreams for Veronica. More importantly, Veronica cannot wait for what’s next in her life, and that does not include being a mom.

To Veronica’s horror, it turns out scheduling an appointment at a clinic is more difficult than she’d thought. Because she is underage, nowhere in Missouri will perform the “procedure,” making the closest location Albuquerque. Veronica does not have a car. But she does devise a plan, because a trip to New Mexico is her only option. However, said plan hits some road bumps, and Veronica winds up enlisting the help of someone she never expected.

I had high hopes for Unpregnant. How many YA novels can say they include the topic of abortion, let alone center an entire story on it? Deciding to have an abortion and the procedure, itself, are worth talking about. I expected a well-thought-out narrative that was informative and enlightening.

I received the opposite.

Unpregnant‘s use of (bad) humor completely missed the mark. Cheap jokes stole pages–chapters–from what could’ve been a compelling, emotional story. The YA realm finally had a real chance to explore a necessary topic, and, instead, Unpregnant made a mockery of it.

To make matters worse, the novel used other topics–such as sexual assault, abusive relationships, and homosexuality–to further its quest for comedy. Unpregnant honestly made me uncomfortable, and that uneasiness had absolutely nothing to do with the concept of abortion. In 2019, there should be no place for such dated, insulting language and schemes. Unpregnant appears to be progressive, but it’s doing little more than backtracking.

The one salvaging factor of Hendriks and Caplan’s work was the trip taken to Albuquerque. I’m a sucker for a good road trip. The sense of adventure coming from some of the documented experiences was captivating. But it was not enough to make Unpregnant worth my time.

Unpregnant is out now. You can grab a copy via Amazon or IndieBound.

Seventeen-year-old Veronica Clarke never thought she would wish she’d failed a test until she finds herself holding a thick piece of plastic in her hands and staring at two solid pink lines. Even the most consistent use of condoms won’t prevent pregnancy when your boyfriend secretly pokes holes in them to keep you from going out-of-state for college.

Veronica needs an abortion, but the closest place she can legally get one is over nine hundred miles away—and Veronica doesn’t have a car. Too ashamed to ask her friends or family for help, Veronica turns to the one person she believes won’t judge her: Bailey Butler, Jefferson High’s own little black cloud of anger and snark—and Veronica’s ex-best friend. Once on the road, Veronica quickly remembers nothing with Bailey is ever simple and that means two days of stolen cars, shotguns, crazed ex-boyfriends, truck stop strippers with pro-life agendas, and a limo driver named Bob. But the pain and betrayal of their broken friendship can’t be outrun. When their fighting leads to a brutal moment of truth, Bailey abandons Veronica. Now Veronica must risk everything in order to repair the hurt she’s caused.