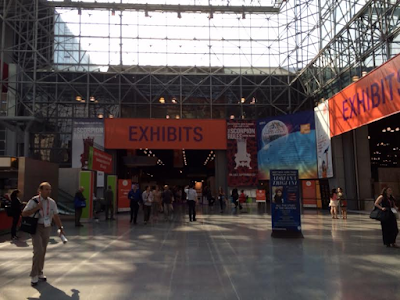 This was my first BEA and I was lucky to have had the opportunity to attend before it moves to Chicago in 2016! It was definitely a memorable experience for me and I met so many awesome people, from bloggers to authors. Prepare for a really long post!

Day 1 (May 27): The show floor opened at 1 PM, so I arrived slightly before to pick up my badge. The first day was supposed to be my most relaxing day (though it ended up being the most tiring – don’t know how that happened). The line looped around the Javits center and I was in awe at how long it was. However, a few minutes before 1pm, they allowed people to start entering and then everyone entered really fast so I didn’t actually have to wait very long. I made a beeline for the Disney booth since they were doing a drop for A Thousand Nights by E.K. Johnston, which was on the top of my list. There was only one book left when I got there, and a nice guy and I reached for it at the same, but he let me have it! 😀 (Thank you to all the wonderful generous people there<3)
After, I wandered the floor a bit and got some interesting looking ARCs and headed to The White Rose signing with Amy Ewing around 45 minutes early since I didn’t really have much to do between that time. I then when to a scheduled galley drop, wandered around the show floor again, and lingered until The Witch Hunter signing with Virginia Boecker, who is super sweet! This was, again, one of my most anticipated signings of the day since I’ve been looking forward to this book for some time now!

The last thing I had in mind for day 1 of BEA was HarperCollins’ Walk on Earth A Stranger & Newt’s Emerald Drop. Once the line started, it went by really, really quickly.

Overall, the overall trend for BEA day 1 was: sort of long lines, but they all went by pretty quickly once it actually started. It was also about 5 times less chaotic than BookCon last year, which gave it major bonus points in my book.

Day 2 (May 28): I sadly had to miss BEA on the second day even though I had fully planned on going! 🙁 Sad that I missed HONY’s Brandon Stanton and Passenger by Alexandra Bracken, but I did manage to see most of the other authors I had planned on seeing originally on the second day on the last day.

Day 3 (May 29): So the third day was by far the busiest for me. The very first signing I went to was Margaret Stohl’s Black Widow! I bumped into Angela, with her gorgeous book dress (check it out on her twitter) on this line! This was by far the slowest moving line at BEA; usually, after the line starts moving, it goes pretty fast, but I waited around 45 minutes even after it started. I didn’t anticipate that it’ll take so long, so I missed Six of Crows (noo). I also saw a drop of A Whole New World at the Disney booth, much to my excitement. I then took time to wander around and eat lunch.

My afternoon was much busier and at around 11:45, I headed to the Harlequin Teen power hour signing with Kady Cross, Katie McGarry, Adi Alsaid, and Eleanor Herman and there was a line forming even though it didn’t start until 1 pm! However, I met Jessica @ Bookish Serendipity  and TJ @ We So Nerdy in line and had a lovely conversation with them, so the hour went by fairly fast.

Right after the Harlequin Teen signing, I rushed to the 2:30 signing of Richelle Mead’s Soundless, another one of my most wanted ARCs. The line was long, but not as long as I had expected it to be. I also met Sajda @ Across the Words on this line, and managed to also catch Marissa Meyer signing Fairest, which was a relief since I had originally planned to see her on the 2nd day! Marissa is probably one of the sweetest authors I met at BEA and I managed to get a photo with her. I then went to my last BEA 2015 signing, which was Erin Bow’s The Scorpion Rules, which was quite spontaneous since I don’t even think it was on my schedule. I also met Nichol @ Stacks Waiting on this line; I had been talking to her on twitter throughout BEA so it was great to see her in person! :-).

Although I was sad that my first ever BEA had come to an end, my body was tired and I was ready to head home (and come back the next day for BookCon ;)).
Summary:

My highlights/”favorites” of BEA 2015 were:
– A Thousand Nights by E.K. Johnston drop
– The Witch Hunter signing with Virginia Boecker
– A Whole New World by Liz Braswell drop
– Soundless signing with Richelle Mead
– Fairest signing with Marissa Meyer
& of course, meeting all the wonderful authors and bloggers!