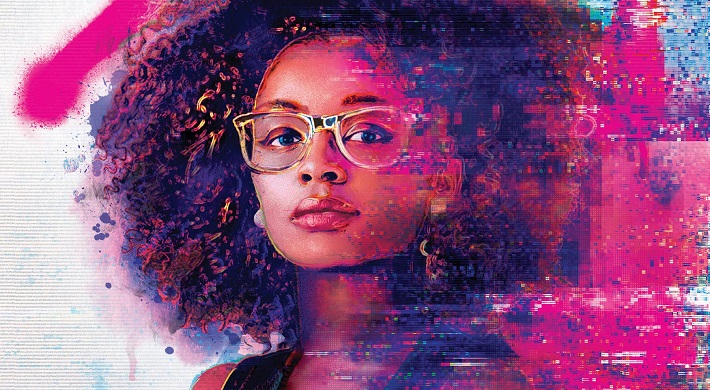 Gaming and YA drama after set to collide in Brittney Morris’ Slay, a debut novel that’s getting some major attention.

The book follows 17-year-old Kiera Johnson, the brilliant, black, and most importantly anonymous game developer behind a popular web game called Slay that’s taking over the Internet. But someone’s murder is traced back to a dispute in the Black Panther-inspired game, the mainstream media comes down hard on the world Kiera created. She believes it’s a safe space for the black community, they say it’s exclusionary and racist. When an anonymous troll hell-bent on bringing Kiera down enters the game, she’ll have to gather all her resources “to be unapologetically black in a world intimidated by blackness.”

After a major bidding war between several publishing houses, including the “big five”, and plenty of rumors about an adaptation in the works, we’re definitely ready to dive into this world!

Entertainment Weekly shared the bright and tech-y cover for the novel, along with the first chapter. Check it out below!

Chapter One
Playing the Game

By day, I’m an honors student at Jefferson Academy. At night, I turn into the Nubian goddess most people know as Emerald.

The second the bell rings, I’m out of my desk seat and bolting through the classroom door. There’s a battle tonight between PrestoBox, a master wizard from the Tundra, and Zama, a Voodoo queen from the same region. I absolutely can’t miss it. Once safely in the hallway, I pull out my phone and open WhatsApp to find a new text from the game mod, Cicada.

I grin, glancing up for a second to watch where I’m going as throngs of students pour from classrooms and navigate around me.

Me: Wouldn’t miss it.

“Hey, Kix!” comes Harper’s voice, startling me from my thoughts. I look up to see her and my sister Steph walking toward me in their matching pink T-shirts with the Greek letters for Beta Beta Psi, a collective of the eight most outspoken, unapologetic, woke feminists at Jefferson Academy. Leave it to my parents to transfer us to a high school that prepares its students for college so thoroughly, they claim to have the most robust high school Greek life program in the country.

“Hey, Harp. Hey, Steph,” I say, trying not to sound disappointed that I won’t get out of here for another ten minutes. I slip my phone into my back pocket and put on my best happy to see you face.

“Hey, Kiera.” Steph says with a grin, brushing her bangs out of the way of her lime-green glasses. Steph has a new pair of cheap plastic glasses for each day of the week, and her hair is always pressed straight and cut neatly at her shoulders. She insists keeping her hair straight saves time in the morning, but until she can prove it, I’ll keep my five-minute wake-up-and-shake-out-my-twist-out routine.

“I’m heading home early today to get started on our Beta Beta posters for the game tomorrow night,” she says. “Each one is going to have an inspirational word at the top in huge bubble letters—like ‘Endurance’ and ‘Perseverance.’ We’re going to have the players sign them and put them up in the halls around school afterward. Plus, Mom said she’ll take me out later tonight to get more permit hours. Wanna walk with me?”

I thought endurance and perseverance were kind of the same thing, but if I start in on that conversation, I really won’t get out of this hallway before the duel starts. Harper chimes in before I can answer.

“Actually, Steph,” says Harper, “I wanted to talk to Kix for a second. Need to ask her advice about something.”