Check Out The Cover and First Two Chapters of TRIALS OF APOLLO: THE TYRANT’S TOMB 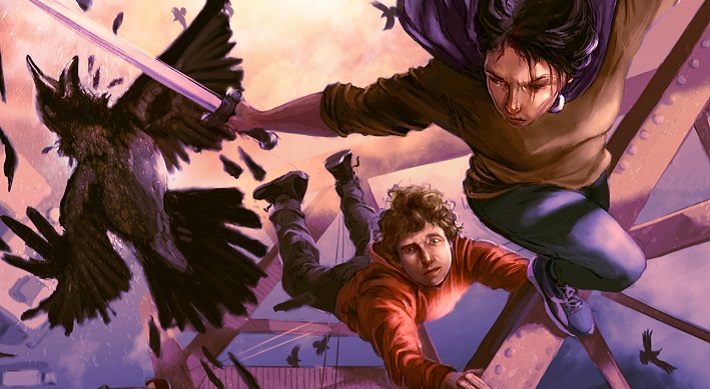 Prepare to enter THE TYRANT’S TOMB with the fourth book’s first sneak peeks!

After the devastating end of The Burning Maze, Apollo aka Lester Papadopoulos is head on another journey in Rick Riordan‘s next book in the Trials of Apollo series, The Tyrant’s Tomb!

Entertainment Weekly has the first look at the fourth book in the series. Let’s start with the gravity-defying cover!

Next up, there’s the first two chapters of the book. It all starts with Lester and Meg McCafferty on a solemn mission: To return Jason’s body to Camp Half-Blood. Of course, the journey is interrupted pretty quickly.

1.
There is no food here

Meg ate all the Swedish fish

Please get off my hearse

I believe in returning dead bodies.

It seems like a simple courtesy, doesn’t it? A warrior dies, you should do what you can to get their body back to their people for funerary rites. Maybe I’m old-fashioned. I am over four thousand years old. But I find it rude not to properly dispose of corpses.

Achilles during the Trojan War, for instance. Total pig. He chariot-dragged the body of the Trojan champion Hector around the walls of the city for days. Finally I convinced Zeus to pressure the big bully into returning Hector’s body to his parents so he could have a decent burial. I mean, come on. Have a little respect for the people you slaughter.

Then there was Oliver Cromwell’s corpse. I wasn’t a fan of the man, but please. First, the English bury him with honors. Then they decide they hate him, so they dig him up and “execute” his body. Then his head falls off the pike where it’s been impaled for decades and gets passed around from collector to collector for almost three centuries like a disgusting souvenir snow globe. Finally, in 1960, I whispered in the ears of some influential people, Enough, already. I am the god Apollo, and I order you to bury that thing. You’re grossing me out.

When it came to Jason Grace, my fallen friend and half brother, I wasn’t going to leave anything to chance. I would personally escort his coffin to Camp Jupiter and see him off with full honors.

That turned out to be a good call. What with the ghouls attacking us and everything.

Sunset turned San Francisco Bay into a cauldron of molten copper as our private plane landed at Oakland Airport. I say our private plane. The chartered trip was actually a parting gift from our friend Piper McLean and her movie star father. (Everyone should have at least one friend with a movie star parent.)

Waiting for us beside the runway was another surprise the McLeans must have arranged: a gleaming black hearse. Meg McCaffrey and I stretched our legs on the tarmac while the ground crew somberly removed Jason’s coffin from the Cessna’s storage bay. The polished mahogany box seemed to glow in the evening light. Its brass fixtures glinted red. I hated how beautiful it was. Death shouldn’t be beautiful.

The crew loaded it into the hearse, then transferred our luggage to the backseat. We didn’t have much: Meg’s back- pack and mine (courtesy of Marco’s Military Madness), my bow and quiver and ukulele, and a couple of sketchbooks and a poster-board diorama we’d inherited from Jason.
I signed some paperwork, accepted the flight crew’s condolences, then shook hands with a nice undertaker who handed me the keys to the hearse and walked away.

I stared at the keys, then at Meg McCaffrey, who was chewing the head off a Swedish fish. The plane had been stocked with half a dozen tins of the squishy red candy. Not anymore. Meg had single-handedly brought the Swedish sh ecosystem to the brink of collapse.

“I’m supposed to drive?” I wondered. “Is this a rental hearse?”
Meg shrugged. During our flight, she’d insisted on sprawling on the Cessna’s sofa, so her dark pageboy haircut was flattened against the side of her head. One rhinestone-studded point of her cat-eye glasses poked through her hair like a disco shark.

The rest of her out t was equally disreputable: floppy red high-tops, threadbare yellow leggings, and the well-loved knee-length green frock she’d gotten from Percy Jackson’s mother. By well-loved, I mean the frock had been through so many battles, washed and mended so many times, it looked less like a piece of clothing and more like a deflated hot-air balloon. Around Meg’s waist was the pièce de résistance: her multi-pocketed gardening belt, because children of Demeter never leave home without one.

“I don’t have a driver’s license,” she said, as if I needed a reminder that my life was presently being controlled by a twelve-year-old. “I call shotgun.”

Trials of Apollo: The Tyrant’s Tomb hits shelves on September 24, 2019. You can preorder it now via Amazon or support your local independent bookstore via Indiebound!