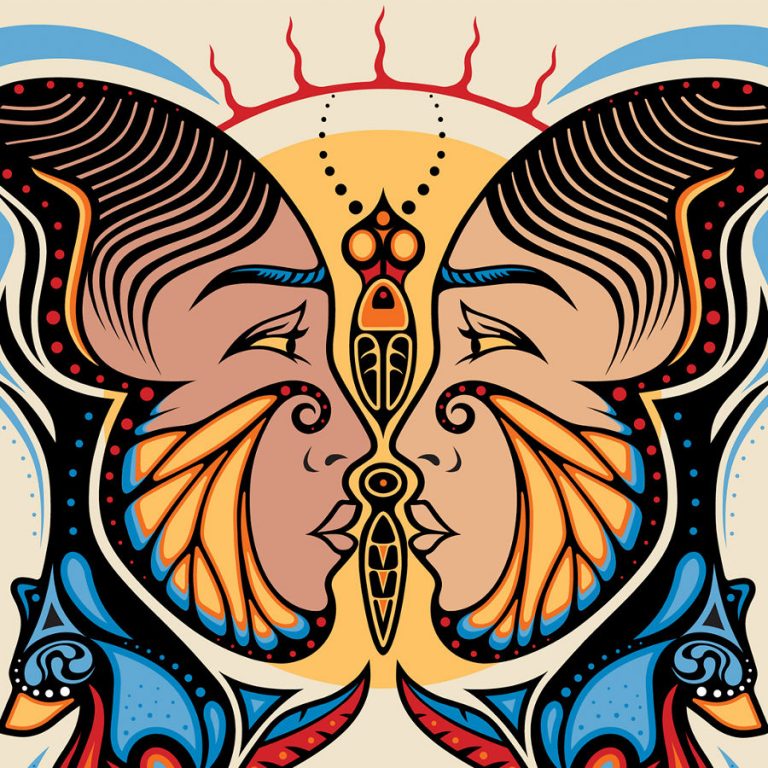 Though new author Angeline Boulley can’t share her debut novel until 2021, we at least have a cover for FIREKEEPER’S DAUGHTER, plus a first look at what’s to come.

Firekeeper’s Daughter, the upcoming debut novel for the Sault Ste. Marie Tribe of Chippewa Indians member Angeline Boulley, doesn’t hit stores until March 2021, but today, Entertainment Weekly revealed the cover of this special contemporary YA novel, which focuses on a young woman from the Ojibwe community.

The cover definitely has the look of the cultural art of a Native American tribe, with the feel of a powerful, strong, and passionate female protagonist.

Official Overview of Firekeeper’s Daughter, with a first look of the novel afterward:

Debut author Angeline Boulley crafts a groundbreaking YA thriller about a Native teen who must root out the corruption in her community, for readers of Angie Thomas and Tommy Orange.

As a biracial, unenrolled tribal member and the product of a scandal, eighteen-year-old Daunis Fontaine has never quite fit in, both in her hometown and on the nearby Ojibwe reservation. Daunis dreams of studying medicine, but when her family is struck by tragedy, she puts her future on hold to care for her fragile mother.

The only bright spot is meeting Jamie, the charming new recruit on her brother Levi’s hockey team. Yet even as Daunis falls for Jamie, certain details don’t add up and she senses the dashing hockey star is hiding something. Everything comes to light when Daunis witnesses a shocking murder, thrusting her into the heart of a criminal investigation.

Reluctantly, Daunis agrees to go undercover, but secretly pursues her own investigation, tracking down the criminals with her knowledge of chemistry and traditional medicine. But the deceptions—and deaths—keep piling up and soon the threat strikes too close to home.

Now, Daunis must learn what it means to be a strong Anishinaabe kwe (Ojibwe woman) and how far she’ll go to protect her community, even if it tears apart the only world she’s ever known.

Author Angeline Boulley also did a virtual Q&A session online and if you’re interested in watching it, you can check it out here.

And now, for your chance to get a first look of Firekeeper’s Daughter before it hits stores, read on:

I am a frozen statue of a girl on my knees in the woods. Only my eyes move, darting from the gun to their startled expression.

The snub-nose revolver shakes with tiny tremors from the jittery hand aiming at my face.

My nose twitches at a greasy sweetness. Familiar. Vanilla and mineral oil. WD-40. Someone used it to clean the gun. More scents: pine, damp moss, skunky sweat, and cat pee.

The jittery hand makes a hacking motion with the gun, as if wielding a machete instead. Each diagonal slice towards the ground gives me hope. Better a random target than me.

But then terror grips my heart again. The gun. Back at my face.

Mom. She won’t survive my death. One bullet will kill us both.

A brave hand reaches for the gun. Fingers outstretched. Demanding. Give it. Now.

I am thinking of my mother when the blast changes everything.

In Ojibwe teachings, all journeys begin in the eastern direction.

I start my day before sunrise, throwing on running clothes and laying a pinch of semaa at the eastern base of a tree, where sunlight will touch the tobacco first. Prayers begin with offering semaa and sharing my Spirit name, Clan, and where I am from. I always add an extra name to make sure Creator knows who I am. A name that connects me to my father—because I began as a secret and then, a scandal.

I give thanks to Creator and ask for Zoongidewin, because I’ll need courage for what I have to do after my five-mile run. I’ve put it off for a week.

The sky lightens as I stretch in the driveway. My brother complains about my lengthy warm-up routine whenever he runs with me. I keep telling Levi that my longer, bigger, and therefore vastly superior muscles require more intensive preparation for peak performance. The real reason, which he would think is dorky, is that I recite the correct anatomical name for the muscles as I stretch. Not just the superficial muscles but the deep ones, too. I want an edge over the other college freshmen in my Human Anatomy class this fall.

By the time I finish my warm-up and anatomy review, the sun peeks through the trees. One ray of light shines on my semaa offering. Niishin! It is good.

My first mile is always hardest. Part of me still wants to be in bed with my cat, whose purrs are the opposite of an alarm clock. But if I power through, my breathing will find its rhythm, accompanied by the swish of my heavy ponytail. My legs and arms will operate on autopilot. That’s when my mind will wander into the Zone, where I’m part of this world but also somewhere else, and the miles pass in a semi-alert haze.

My route takes me through campus. The prettiest view in Sault Sainte Marie, Michigan is on the other side. I blow a kiss as I run past Lake State’s newest dorm, Fontaine Hall, named after my grandfather on my mother’s side. My grandmother Mary—I call her GrandMary—insisted I wear a dress to the dedication ceremony last summer. I was tempted to scowl in the photos but knew my defiance would hurt Mom more than it would tick off GrandMary.

I cut through the parking lot behind the student union toward the north end of campus. The bluff showcases a gorgeous panoramic view of the St. Mary’s River, the International Bridge into Canada, and the city of Sault Sainte Marie, Ontario. Nestled in the bend of the river east of town is my favorite place in the universe: Sugar Island.

The rising sun hides behind a low, dark cloud at the horizon beyond the island. I halt in place, awestruck. Shafts of light fan out from the cloud, as if Sugar Island is the source of the sun’s rays. A cool breeze ruffles my t-shirt, giving me goose bumps in mid-August.

“Ziisabaaka minising,” I whisper in Anishinaabemowin the name for the island, which my father taught me when I was little. It sounds like a prayer. My father’s family, the Firekeeper side, is as much a part of Sugar Island as its spring-fed streams and sugar maple trees.

When the cloud moves on and the sun reclaims her rays, a gust of wind propels me forward. Back to my run and to the task ahead.

To continue reading the rest of the excerpt, click here.

Or if you would like to go ahead and pre-order Firekeeper’s Daughter, which hits shelves March 2, 2021, go through any of the following links:

Cover Reveal: GARDEN OF THORNS AND LIGHT by Shylah Addante