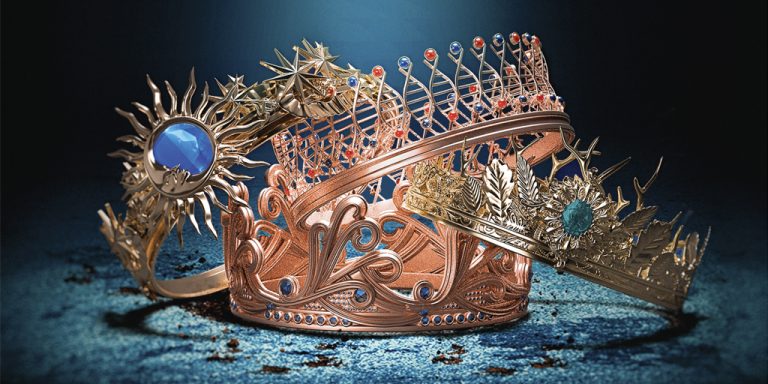 The four queens of Quadara are all dead, and two young citizens– Keralie and Varin– find themselves stuck in the heart of the conspiracy against the nation!

Penguin Teen is rolling out the hype train for Four Dead Queens by Astrid Scholte, which looks like a wild ride through a fantasy world on the brink of chaos. Now, the publisher is releasing the first official excerpt from the mid-winter release. It introduces us to one of the queens and the history of royalty in Archia before something rather surprising happens!

The excerpt starts at Chapter 2, which makes us wonder– What the heck happened in Chapter 1?!

Iris decided to spend the remainder of the day in her cultivated palace garden. Growing up, she had enjoyed countless hours in the immaculate grounds that surrounded her childhood home. It was there where she had imagined her reign and how she would rule an entire quadrant. Iris had been a solitary child, and while she had thought she’d prepared herself to be queen, she had not expected anyone could be capable of influencing her reign.

The garden was located in the Archian section of the palace, split in four as the nation itself. The garden sat outside the golden dome, perched on the cliff overlooking the channel toward the neighboring isle of Archia. Long ago, one of her ancestors had demanded access to nature—to life. Queenly Law decreed the queens were never to leave the palace—for their safety and to ensure they weren’t moved by external influences.
Iris would never set foot in her quadrant again, never soak in the beauty of Archia or see the stags and deer roam the mountains.

She sat back in her wooden settee; it sank into the grass while her black skirt swallowed the frame. She removed her heavy crown and placed it on the table beside her. She tilted her head, enjoying the sunlight on her pale skin. The warm springs bubbled nearby, reminiscent of the gentle brook that trickled not far from her childhood home.

This would have to do.

Also dictated by Queenly Law, Iris had been raised by adoptive parents outside the palace in the region she would one day rule. But while she’d been raised in a humble stone cottage, she’d never wanted for anything. She didn’t know how to want for things she’d never seen, never experienced. She learned all she could about her land, the animals and her people. And Quadara’s dark past.

Archia had been an untouched refuge from the nation’s troubles for hundreds of years; in fact, it wasn’t until Toria had built their boats and traveled to the west that the lush island was discovered. The rest of the nation had grown desperate, their natural resources nearly depleted. And there was Archia, ripe for the taking.

While the distinct regions had each developed strengths and resources, they shared the same weakness. Jealousy.

And so began the Quadrant Wars. They lasted nearly a decade, with thousands of lives lost. During this time, the other regions attempted to conquer Archia. But their plans were foolish. As rearing livestock was foreign to Eonists, Torians grew restless and wanted to discover new lands, and Ludists didn’t want to dirty their elaborate outfits by tending to the crops.

Then the founding queens of Quadara built the walls to separate the regions, finally ending the Quadrant Wars. The walls provided space to breathe, allowing the quadrants to continue to evolve independently, and harmoniously.

Archia was once again safe.

Four Dead Queens hits shelves on February 26th. You can preorder it now via Amazon and if you do, you can get a free collectible pin from Penguin Teen by showing your proof of purchase!

Check Out The First Chapter Of Tahereh Mafi’s SHADOW ME