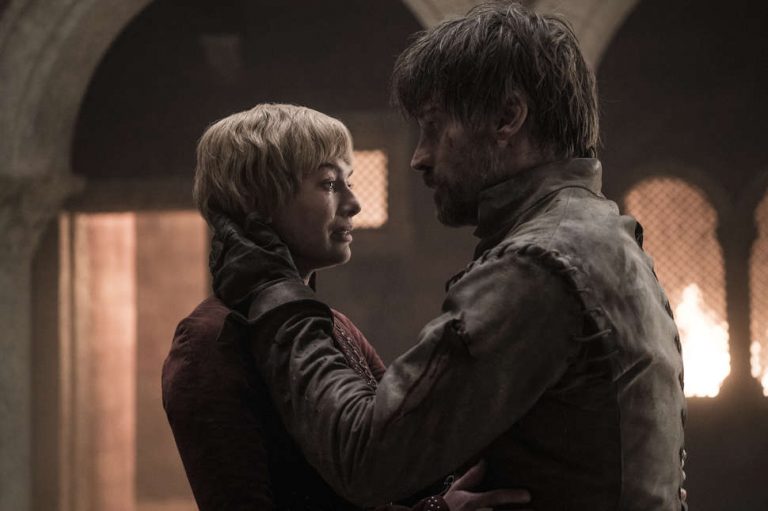 Game of Thrones‘ penultimate episode featured a lot of death and destruction and now, the actors behind it all are speaking out. Be aware, there are spoilers galore below!

First off, the queen is dead. And no, she didn’t go out in a blaze of glory. Rather, she spent her last few moments with her twin brother as the Red Keep’s cellar collapsed around her.

At first, this death may seem anticlimactic and a bit of a cop out to fans. After all, Cersei managed to outwit her enemies time and time again on the acclaimed drama series on to be killed by a pile of rocks.

Actress Lena Headey spoke to EW about the character’s final moments and how while it may seem counter-intuitive, the way she died was actually quite fitting for Cersei, a reflection on her story and characterization.

She’s desperately unhappy and everything that’s happened becomes more real than it ever has for her. She starts to lose control of the situation. She’s destroyed every good alliance, connection, love in her life — she was always destined to be alone. And until the very, very last minute, she is, as ever, in denial of what’s actually happening.

If you felt that Cersei should’ve gone out with a bang, you weren’t the only one. Headey says her reaction that final scene was “mixed” at first and she too wanted to have some big piece or fight with somebody.

But then the actress went over the scene with Nikolaj Coster-Waldau and began to understand and appreciate Cersei’s final moments.

I think the important thing is that Jaime had a chance at freedom [with Brienne]and finally liberated himself from Cersei […] I think the biggest surprise is he came back for her. Cersei realizes just how she loves him and just how much he loves her. It’s the most authentic connection she’s ever had. Ultimately they belong together.

In that last moment, staring at her brother, waiting for the end, Headey shares that it may be the first time that Cersei has ever felt peace.

When asked about her favorite Cersei scenes in all of the eight season, Headey couldn’t choose just one. So instead, she chose a few. “I had a lot of great ones — that one with Mark Addy [Robert Baratheon] back in the first season,” she says. “Those early scenes with Tyrion where you saw their relationship develop. The stuff with Sophie early on. Everything that shaped these characters. The scene where she tells her father that her and Jaime were lovers. We had some great stuff. I love the juicy dark emotional moments.”

Cleganebowl finally happened. The epic battle against brother and brother ended with neither winning.

Both men perished. Although The Hound was victorious on a personal level. Not only did he confront his older brother, he also confronted his fear of fire, quite literally bringing his brother into the flames.

Sandor Clegane actor Rory McCann talked to EW about the show and his character’s exit. While McCann’s remained relatively tight-lipped over the years, he’s decided to open up this last season to give some insight into his experience and his character.

At the time of the interview, McCann hadn’t filmed the fight yet and was a bit intimidated when it came to going up against actor Hafþór Júlíus Björnsson aka The Mountain, but he handled it with humor:

I hope he knows his f—ing strength. I’m just going to have to go into Glasgow bar fight mode if it goes the wrong way because he’s a big big boy.

Ultimately, McCann knew he had his work cut out for him, he found the beauty and the irony in The Hound having to die by his greatest fear– fire– in order to stop his brother.

I hope I have enough gas in the tank to do it right. It’s a massive fight. I think it’s going to take three days to film it. He’s going to be throwing me. I’m absolutely sure I’m going to be limping for months after it and that’s the reason my last filming days are the fight. It’s a glorious death. He’s laughing at it. The Hound can see that [The Mountain] can’t be killed by sticking a dagger in his eye. He has to be burnt. Of all the things Cleagane has to do, he has to go into the fire. That’s the sacrifice. But his pain is over.

Lastly, it seems that we weren’t the only one sitting with our mouths wide open like a goldfish when Varys, the loyal eunuch, met his end. In another EW interview during production, the Game of Thrones actor candidly shared his his feelings about the fate of Varys — the master of whispers introduced in the first season.

Conleth Hill, who has played the enigmatic characters through the years, says he too had a very difficult time when he read of Varys’ death without any pre-warning from the creators.

I took it very personally. I took it as a person, not as an actor or an artist. […] You can’t help feeling that you failed in some way, that you haven’t lived up to some expectation that you didn’t know about. The only thing that consoles you is people who worked a lot harder than you are in the same boat. So that helps.

Still, what made Varys so unique from his counterparts was that he was a true civil servant wanting nothing more than to have the right ruler sit upon the Iron Throne, which is what truly leads to his death. Hill discussed the betrayal of Dany and why is works for this death.

All brilliant. All noble. He was absolutely true to his word the whole way through. All he wanted was the right person on the throne and a fair person on the throne. He said it so many times in the scripts. […] Now with hindsight, I’m okay, but I really was inconsolable.

Game of Thrones airs its final episode this Sunday, May 19th, on HBO.