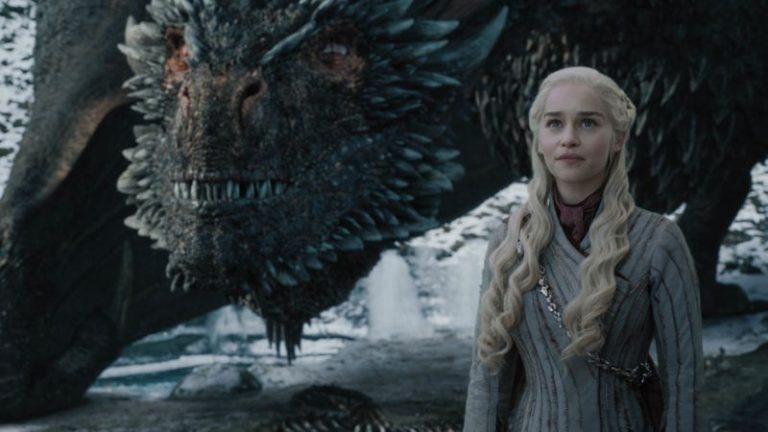 SPOILER ALERT!! Of course, it goes without saying that there will be many many spoilers in this recap so if you haven’t yet watched the penultimate episode of the series, this is your warning now!!

No? Still reading? Great!! Let’s dive into what happened in one of the most consequential episode in Game of Thrones history ever. Not only was this episode a brilliantly directed and visually stunning episode, the writers really jam packed it with so much action.

Oh… and let’s not forget our dear little warrior who slayed the Night King in the episode prior. Arya’s decided to choose life over vengeance for once and I can’t be the only one who teared up a little bit when she called out Sandor aka The Hound’s real name.

I will try to keep this recap as objective as possible but will gladly discuss in the comments below. So be sure to leave a comment about what you thought about this second to last Game of Thrones episode.

In the castle, we see Daenerys as we’ve never seen her before. At least, not for quite some time. The grieving Mother of Dragon is visited by Tyrion who informs her that somebody has betrayed her.

As if she wasn’t already feeling a bit nervous after everything that’s been going on, now she has to figure out who she can still trust and who she can’t.

Naturally, our Mother of Dragons immediately throws out Jon’s name. Nope. However, for Tyrion, this is a tough situation. On one hand, Varys saved his life. But Tyrion is also a realist and knows that he’s on thin ice with the queen. A man’s gotta do what a man’s gotta do to survive, even if that means turning your back on a former friend.

Later that evening, Grey Worm enters Varys’s room where the Spider is seen taking off his rings. We see Tyrion and Jon in the crowd as Varys is brought forward to face his execution. In his last words to his former friend, Varys shows that he will die holding his value and morale intact.

But you can see it on his face — Varys knows he’s right. Dany is no longer his queen.

Doesn’t matter, I suppose. With a blast from Drogon, Varys is gone. Seems kind of fitting since as a child, Varys’ genitals were tossed into a magical fire, inspiring his lifetime dislike and distrust of sorcery. Now the rest of him is also consumed by a magic-induced fire

With Varys now gone, Tyrion tries one last time to convince Dany to show restraint and not attack the city. He even brings up Meereen in an attempt to dissuade her from acting so rashly.

When Dany ‘s mind seems unchanged, Tyrion says he’ll sneak into the city and try to convince his sister to surrender one final time. If he’s successful, the city’s bells will ring to signal Dany to stop the attack.

But then Dany drops a bombshell, stating that Jaime Lannister was caught trying to sneak behind enemy lines. She warns Tyrion that she will execute him if he betrays her.

So what’s Tyrion to do? Logically, he realizes that Jaime would have a better chance to convince Cersei than he does and pays his imprisoned brother a visit.

In one of the most emotional scenes in this episode, Tyrion chooses to betray his queen and releases his brother, just as Jaime freed Tyrion in season 4. And we are reminded that amidst all of the chaos and tension, these two brothers never lost their love for each other.

“Tens of thousands of innocent lives, one not particularly innocent dwarf, seems like a fair trade. If it weren’t for you I never would have survived my childhood. You were the only one who didn’t treat me like a monster.”

This is such a bittersweet moment as Tyrion knows he’s never going to see his brother alive again, one way or the other.

If he marched into the Red Keep to try and speak with Cersei, she’d kill him or perish in the attack. But by freeing Jaime and sending him in his place, Tyrion is committing treason. And Dany would most certainly execute him as she did Varys.

We now know sadly that it is Jaime that ultimately met his end in this episode.

THE LANNISTER TWINS’ STORY COMES TO AN END

Speaking of Jaime, there were many fans theorizing that it’d be Jaime to draw his sister’s last breath. How gratifying it’d be. But of course this is Game of Thrones and anything can happen.

For example, the battle that we didn’t know we needed. Jaime vs. Euron.

The fight tests Jaime’s left-handed sword fight training and Euron has a blast. Euron is convinced that he will wind up on top and even more so when he mortally wounds Jaime with several devastating stabs to the gut. Somehow, someway, Jaime is still able to finish him off.

I swear, Euron must be the only character on the show who’s ever been so thrilled to perish.

But a few stabs to the gut? Please. Despite being severely wounded and on his last legs, Jaime finds Cersei, who’s now in full panic mode as reality sets in, and takes her down into the cellars where Tyrion told him there was a secret exit.

For a moment, we feel a jolt of hope. Maybe some of our favorites will get out of this nightmare with a happy ending.

Of course not. They find the passage blocked. The giant dragon skull seems to mock Cersei — a living dragon is destroying the city above and here is a dead one down below.

Jaime realizes the end is near and tries to soothe her by making her last few seconds of life something good.

“Just look at me, there’s only the two of us. We’re the only ones who matter.”

They’re staring at each other as the ceiling collapses ultimately killing them both. They went out of the world as they came into it — together.

ARYA: NO LONGER OUR LITTLE ASSASSIN

Cersei’s been on Arya’s list of names for so long that I can’t be the only one waiting on the edge of my seat gearing up for the ultimate Arya/Cersei showdown.

But our Arya story arc took a surprising corner when The Hound talks Arya out of entering the Red Keep with him.

“If you come with me, you’ll die. Cersei’s dead anyway. Do you need to die with her?”

At first it looks like she’s going to refuse and go with him anyway. But after a brief pause, Arya decides she’s had enough of death and turns around.

In doing so, Arya chooses to let go of her vengeance — the complete opposite of Dany. Instead, Arya spends the rest of the episode to try and help the innocent in the city, journeying ash-covered through the streets of King’s Landing.

Arya also calls The Hound “Sandor” for the first time, handing him back a bit of his humanity before the end.

The Hound. We knew this showdown would happen and it did not disappoint. Our hero’s been waiting to fight his brother ever since Gregor held his little brother’s face into the fire when they were kids.

The Hound finds The Mountain. They fight and it’s beautiful. The scene looks like some kind of Renaissance painting come to life. There’s a moment where we think The Mountain is going to repeat his eye gouging trick but The Hound manages to escape.

The Hound stabs The Mountain in the eye with a dagger, but that doesn’t stop him. The Hound realizes the only way to kill his brother is to sacrifice himself, too — into the fire.

So in the last few seconds of his life, Sandor faces his two greatest fears. His brother and the flames. Safe to say that while we lost an amazing character, at least we can rest assure in knowing that our beloved Hound has found peace at last.

DANY’S DESCENT OF NO RETURN

Oh, where to even start! When Daenerys first flies down on Drogon, it was super gratifying. She wipes out the Iron Fleet causing Euron to jump off and face Jaime later on. Dany then also takes out the scorpions on the castle walls and in her eyes, this battle for King’s Landing is pretty simple.

This is where things start to get a bit dicey. We get a standoff. Jon Snow, Grey Worm, and Davos with the Unsullied confront the remaining Golden Company troops. Dany on Drogon perches on the city ramparts. Cersei staring out from the Red Keep and people within the city are crying out to ring the bells.

Will Cersei ring the bells? Of course not. But somebody does. And the Lannister troops throw down their swords to surrender.

So that’s it, right? A happy ending? Dany finally won her long-desired fight.

Wrong. Our dear mother of dragon is riding the high of her destruction. She doesn’t want peace. She wants to destroy. She wants vengeance, and probably not just for Missandei, but for all of those who didn’t choose her as queen.

And so that’s what she does. Dany flies into King’s Landing and starts blasting away. Buildings, civilians, everyone. Doesn’t matter.

Our two main male protagonists are forced to watch this and realize that maybe they were wrong about Dany.

Dany’s been such a fan favorite up until now. Does this mean we’ve been wrong all this time too? We’ve seen Dany make many benevolent choices to try and make the world a better place. But then again, it’s easy to be calm and rational and benevolent when you have two armies and three dragons.

Since season 7, Dany’s lost two dragons, her two most trusted friends and advisors (Ser Jorah and Missandei). She’s gone from ruling a land where she was worshiped to a continent where nobody loves her.

Remember Dany’s quote earlier about ruling by fear? Perhaps now she’s tired of playing nice. She no longer wants to just win, she wants to teach Westeros a lesson after all her struggle.

No more traitors, no more lords refusing the bend the knee. No more disrespect.

Varys did warn Tyrion and the rest of us about the Targaryen predisposition to madness. Maybe Dany had finally snapped.

Only one more week before we find out if Dany’s seat on the Iron Throne is official or if we find someone else who’s better. HBO’s Game of Thrones ends next week with the series finale at 9/8c.