Get a Sneak Peek of STAY GOLD by Tobly McSmith 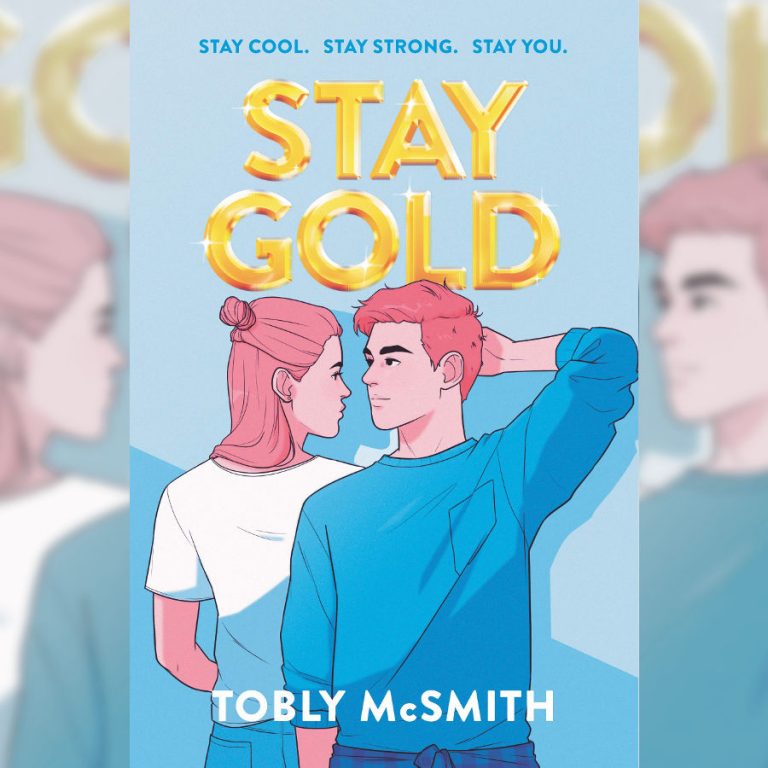 Epic Reads released an excerpt from Tobly McSmith‘s debut novel, Stay Gold, which is also part of the #OwnVoices tag and you can read it below.

But first, here’s the overview of Stay Gold:

Pony just wants to fly under the radar during senior year. Tired from all the attention he got at his old school after coming out as transgender, he’s looking for a fresh start at Hillcrest High. But it’s hard to live your best life when the threat of exposure lurks down every hallway and in every bathroom.

Georgia is beginning to think there’s more to life than cheerleading. She plans on keeping a low profile until graduation…which is why she promised herself that dating was officially a no-go this year.

Then, on the very first day of school, the new guy and the cheerleader lock eyes. How is Pony supposed to stay stealth when he wants to get close to a girl like Georgia? How is Georgia supposed to keep her promise when sparks start flying with a boy like Pony?

Funny and poignant, clear-eyed and hopeful, Stay Gold is a story about finding love—and finding yourself.

And now, for the excerpt:

Fade in, exterior parking lot. The imaginary director calls action, and the scene opens on New Kid sitting alone in his car on the first day of school. He checks his hair in the rearview mirror. There’s a hesitation in his actions. A nervous fidget. New Kid takes a breath and then gets out of his car.

Did the wardrobe department dress New Kid correctly for the scene? He’s wearing an untucked, black, button-up, short-sleeved shirt. Dark blue jeans. His go-to black Sk8-Hi Vans. He studies his reflection in the window of his car. When nervous, I can use too much hair product—I mean, the hairdresser can. But today, it all works. He puts on his backpack and pauses to take in his new school from across the parking lot. (New Kid needs to show up earlier to get a closer spot tomorrow.)

Hillcrest High is an average Texas school. I have seen enough schools—my dad is in the army; we’ve moved five times—to know what’s average. Standard-issue, double-decker, big-box school with faded red bricks and bright white trim. Manicured bushes and trees line the sidewalk, yellow buses line the curb, and an American flag dances proudly over the two huge red doors. From the outside, there’s nothing special about Hillcrest.

New Kid makes his way through the massive parking lot. There’s a stiffness to his walk. Sweat covers his forehead from the Texas heat. New Kid goes unnoticed by the students in the parking lot. They are too busy reuniting with friends and showing off their first-day looks. And New Kid isn’t the kind of guy who turns heads.
But if they were to look my way, what would I want them to see? Nothing more than an average guy of average height and average build, doing average-guy things, living an average-guy life. That’s why Hillcrest High School is perfect for me. We are both striving for the ordinary.

Cue dramatic music. New Kid is frozen in place on the curb. He made it through the parking lot but is now stuck. Imaginary cameras fly in to capture a close-up of his face as he looks at the school lawn before him. There must be several hundred kids talking, hugging, and laughing. Why are the guys wearing fishing gear? New Kid is now filled with doubt and terror. He no longer thinks he can pull this off.

The mission is simple: Walk across the cement pathway that splits the school lawn, up the cement stairs, and through the big red doors into the school. For anyone else, this wouldn’t be a big deal. But New Kid has a secret to keep. A secret so big that it makes the regular things, like walking past a mob of students, feel like the hardest things he has ever done.
Dream sequence of New Kid comically retreating. He turns around, walks back to his car, and never returns. No one knows him, so no one will notice. New Kid winds up paddling gondolas on the canals of Venice for cash and Pizza. End sequence.
I pull my phone out of my pocket. There’s a text from my sister: WHO’S THE MAN? YOU THE MAN.

My sister is right (she is always right). I am the man. I can do this. I close my eyes and take the first step, like I’m diving into a cold pool. Once moving, I open my eyes. Keep my head down, my walk cool, and pretend I don’t see anyone. Just another average day for this average guy. I hear talking and yelling on both sides of the lawn, but I keep moving forward.
I take the cement steps leading to the entrance with great care. A slip and fall now, with so many eyes, would end my life here before it begins.

At the top of the steps, New Kid turns around and scans the yard from an elevated position. He feels victorious. There are so many new faces. Possible new friends. Possible new girlfriends. If no one finds out my secret, the possibilities are endless.

Before turning back around, New Kid spots a girl in the crowd. The Cheerleader. She’s beautiful and bored, holding pom-poms and talking to another cheerleader. For no reason but fate, the Cheerleader’s eyes find his. Light shift. Big music swell. Everyone on the lawn disappears. Extreme close-up on the eyes of New Kid. Extreme close-up on the eyes of the Cheerleader. They float up to the clouds, never once breaking eye contact. The world fades away below, and there’s only him and her, ’cause she’s the love interest and nothing else matters.

Reality comes crashing back when a kid runs into me from behind, almost pushing me down the stairs. I shake my head in disbelief and walk into the school, wondering what kind of guy I need to be to date her.

You can read the rest of the excerpt at Epic Reads.

Or just pre-order the Stay Gold, which comes out May 26th, on Amazon, Barnes & Noble, or Bookshop.