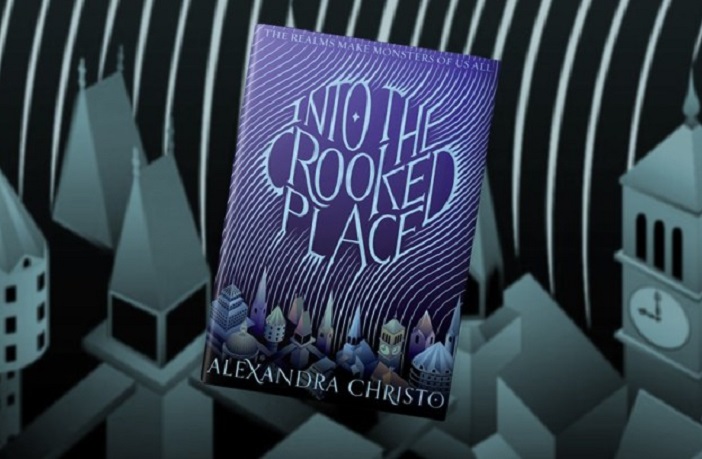 Alexandra Christo wowed readers with last year’s To Kill A Kingdom, an epic, dark re-imagining of The Little Mermaid tale, now she’s back with a YA fantasy adventure duology with a criminal tilt that has us eagerly awaiting the fall!

Into The Crooked Place follows four criminal outlaws with different specialties– Tavia, Wesley, Karam, and Saxony– who must come together to save their city from a dark magic and fast-brewing conflict. The first peeks at the novel just dropped via Tor, so it’s time to dive in!

First off, the cover of this novel is edgy but still has a touch of whimsy to offer up. It also has a veeeeery ominous tagline.

Next, start reading this chapter one excerpt for an early taste of the action!

Tavia Syn made a living on magic and it was rarely the legal kind.
That sort of thing was far too weak and the only way to sell it was to give the illusion of power through sleight of hand and good old-fashioned bullshit. It had been that way ever since the war—not that Tavia had been alive to remember those days—and so most of the time she got by on the markets using the bare minimum of magic and the bare maximum of trickery.

Her love elixirs were usually the first to go, so Tavia made a point to line them up in front of the trick bags. It transformed her flat-pack stall into a mosaic of color, ranging from soft pink—watered down for lust—to burnt red. Which was also watered-down, because magic wasn’t cheap and Tavia didn’t fancy selling obsession. Besides, with a little dye in the mix, nobody was any wiser.

When it came to magic, all that really mattered was timing. And showmanship. Perhaps a mark was a mark and money was money, but there was a difference in how you got that mark and took their money. Style was everything.

And if there was one thing Tavia had in spades, then it was style.

“Gather around,” Tavia said, and then, a little louder and a lot more theatrical, “What you will see here is magic made into miracle.”

The crowds swarmed by the dozen.

READ THE FULL EXCERPT ON TOR!

The streets of Creije are for the deadly and the dreamers, and four crooks in particular know just how much magic they need up their sleeve to survive.

Tavia, a busker ready to pack up her dark-magic wares and turn her back on Creije for good. She’ll do anything to put her crimes behind her.
Wesley, the closest thing Creije has to a gangster. After growing up on streets hungry enough to swallow the weak whole, he won’t stop until he has brought the entire realm to kneel before him.

Karam, a warrior who spends her days watching over the city’s worst criminals and her nights in the fighting rings, making a deadly name for herself.

And Saxony, a resistance fighter hiding from the very people who destroyed her family, and willing to do whatever it takes to get her revenge.

Everything in their lives is going to plan, until Tavia makes a crucial mistake: she delivers a vial of dark magic—a weapon she didn’t know she had—to someone she cares about, sparking the greatest conflict in decades. Now these four magical outsiders must come together to save their home and the world, before it’s too late. But with enemies at all sides, they can trust nobody. Least of all each other.

Into The Crooked Place hits shelves on October 8, 2019. You can preorder you copy now via Amazon or support your local independent bookstore via Indiebound!

Book Review: INTO THE CROOKED PLACE by Alexandra Christo