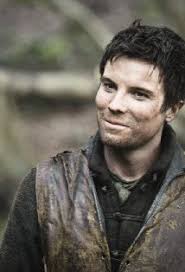 This is what he said in the interview:

How did Game of Thrones come about, then?
It’s a medieval drama, so they need a lot of British actors. I initially auditioned for the part of Jon Snow, and obviously didn’t get it. Down the line I got called in again for different roles. I’d been for two or three different parts, and each time I didn’t get them I’d think; “I’m not getting these parts, they obviously think I’m rubbish.” Eventually I auditioned for Gendry and I thought the initial audition went quite well, but the recall was probably one of the worst auditions I’d ever done. I think it was just one of those things where they’d already decided before I went in for the second audition.

You must have been made up.
It was nice knowing that they’d wanted to work with me, and they were just trying to figure out which piece of the jigsaw I was. In the first series I’m only in two episodes, and I remember thinking that I had none of the physical attributes of the character; I was supposed to be tall and muscular with thick black hair, and I was none of them. They said; “We’ll dye your hair, you go to the gym.” Even after that I was convinced that they were going to recast me; when we were shooting in the first series I was working out whether or not they were avoiding my face so that they could get another actor in for series two.

There seems to be very little job security in Westeros.
I was being paranoid, but I’ve realised since that pretty much everyone in the first couple of weeks on Game of Thronesare so petrified by the scale of the thing that they are utterly convinced that halfway through a take they’re just going to say “Cut” and the producers are going to say “We’ve made a terrible mistake, we’re sorry. Get off our set.” It’s very normal to be scared for your job on Game of Thrones.

It has to be the TV show to be on at the moment. Is it just being paid to LARP?
Probably. We were filming in the studio for this series and they’d built a cave, like the Batcave, and we’re walking around it saying, “This is incredible.” Then someone says, “Right, can we turn the water on, please.” And water starts trickling down the walls and I just thought; “This is my job. I get paid to muck about here.” And then we watched a scene with a sword fight between two guys, one of whom had a flaming sword. Amazing.

What do you think guys? Will you prefer Joe Dempsie as Jon Snow or he’s perfect as Gendry? I love him since I saw it on Skins UK, and I’m glad he’s in another of my favorite tv shows like GOT.

Source: Game of Owns Via: Hypable